I'm not sure about your home, but in ours, bedtime isn't for the faint of heart. There are lots of snuggly Instagram pictures out there about how great bedtime is, but it's typically hand-to-hand combat at our house.

Of course we try to make the most of it, but we're basically saying "Get to bed already, fall asleep."

With a hint of, "Love y'all tons, but my goodness this is taking forever."

Especially with five of them.

On any given night, there's no telling what kids fall asleep in what beds. And where they wake up.

Our boy, #4 has his own room that he hasn't slept in for months.

There are some mornings where we literally think a kid has been swiped in the night. Gone. Missing. Only to find them in some other random bed in the house, totally asleep still.

Tonight, #3 and #4 went to bed together first in one room, then #1 and #5 fell asleep in another, and finally #2 joined #3 and #4 after she got home from dance. Two kids' rooms are empty, at least tonight. We'll see where they are in the morning.

Following? No chance you are.

All this to say, bedtime is a complete moving target. We're constantly trying to hit the bullseye of all five kids being asleep before 9pm. Happens sometimes, not often.

#1 and #5 in the same room is an odd combo for us. We've seen every other possibility, but this one has only recently popped up. The last two nights in fact may be the first. 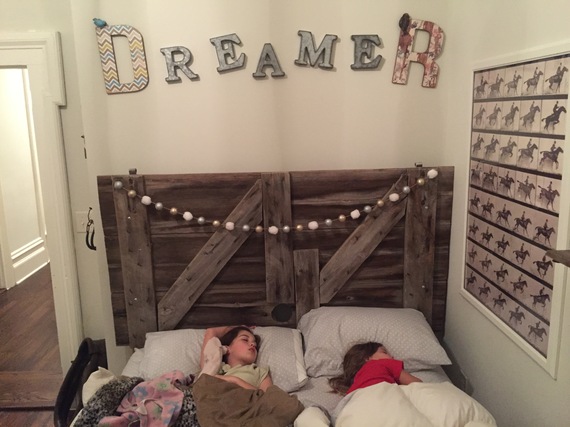 As I sat on #1's bed tonight with #5 crowded in there as well, out of complete accident, I called them the bookends. I don't remember exactly how or why I said that, but I'm certain it was in reference to them still talking, still asking for stuff or simply not going to bed for some other made up reason.

The word stuck with me throughout the night. I started to realize how differently - maybe better at times, maybe worse at times - we've parented #1 compared to #5.

#1 got the full-court press from us. Young-20's, no clue what we were doing, read a few books, take a class and then be rigid as hell.

Be sure the bottle is the perfect temperature, be sure the swing swings at the right speed, be sure the diaper only gets so much pee in it, be sure there are puffy snacks on the ready always.

Take tons of pictures and tons of videos (side note - we had an actual video camera that we held, independent of an iPhone, mind blowing stuff I know), read at least three books before bedtime.

Hug, love, sing, and all that, but be militant. Have a plan, be prepared, don't get caught off guard.

Prevent defense. Young-30's (when we had her, officially in the mid-30's club now), still not much clue what we are doing, siblings read a few books to her, no more classes, the opposite of rigid.

No way we control any of the time, we've realized that.

Be thankful you get a bottle, the swing is in the middle of the loud, chaotic living room, the diaper may be the only clothes you'll wear today, the puffy snacks may be on the floor but you'll be fine.

Take a few pictures and a few videos, throw at least three books in your crib at bedtime.

Hug, love, sing, and all of that. No more militant. Much more grace. 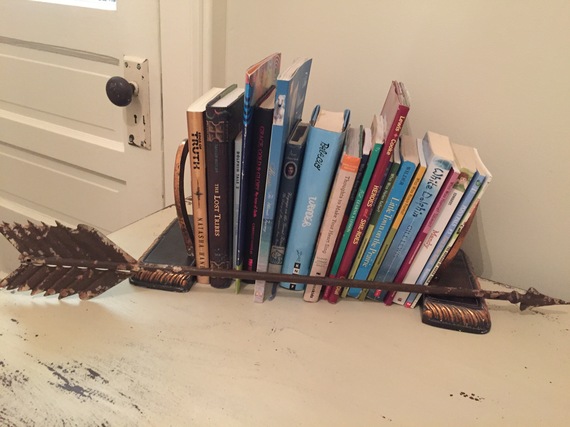 #2, #3 and #4 are held together by these bookends, a visual picture of the arc of our parenting. Rigid and firm on one end. Softer but still present on the other end. Messy, beautiful stories in the middle.

Those bookends finally fell asleep tonight, together, in the same bed.

It's tempting to second-guess or feel guilty for decisions we made that we would likely do different this time around.

But parenting doesn't work like that, does it? We're all doing the best we can, while we're going through it.