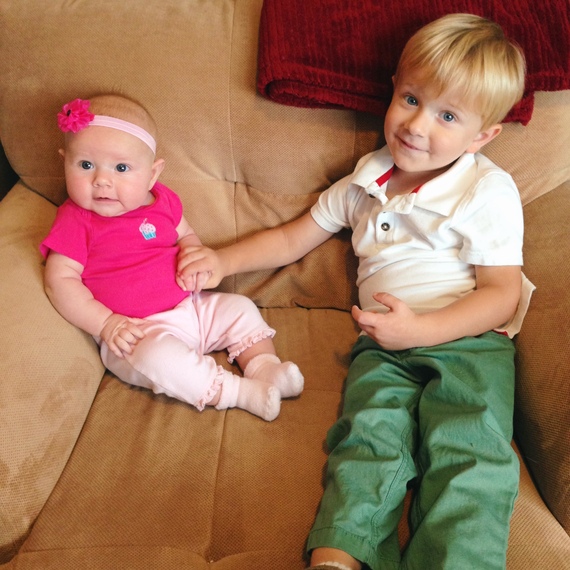 While giving my three-year-old a bath last night, we went over the usual questions.

Why are those called your private parts?

"Because they're only for me."

Should anyone touch you there?

And if someone does touch you there, what should you do?

"Tell Mommy or Daddy right away, even if they tell me not to."

Yes, my husband and I are very proactive about preventing our kids from becoming victims of sexual abuse.

Now, most of the things we're doing to try to prevent the sexual abuse of our kids are things you're probably doing too.

Like telling them repeatedly and openly that no one is ever supposed to touch their genitals -- and if someone does, they should tell us immediately. Even if the person who touched them told them not to.

Like teaching them that they aren't supposed to touch anyone else's genitals either, even if someone asks them to.

Like not forcing them to hug or kiss people -- even relatives -- so that they understand and believe they're always allowed to say no to physical contact.

But we're also taking one more step -- and it's an extreme one.

Our decision to take this drastic approach was based on two factors:

First, there was the devastating death of my sister-in-law when she was only 19 years old -- after a long struggle with addiction, which started after she experienced four painful years of sexual trauma, about which her parents were completely unaware.

Second, there was the laundry list of terrifying statistics that will keep any parent up at night:

So here's what we're doing to (hopefully) keep our children from becoming one of those statistics.

We do not allow any teenage or adult male to be alone with our children.

That means no male babysitters unless at least one other adult is also present.

That means no special trips or outings with just a man.

That means no one-on-one time with male family members or friends.

The only two exceptions to this rule are Daddy and Pops. That's it.

Now, I bet I know what you're thinking.

Women can sexually abuse children, too, you know.

Yes, I know. But as the statistic above shows, the overwhelming majority of perpetrators are male. So if we really want to protect our children, we need to be much more wary of men than women.

Or maybe you're thinking...

But don't you trust your own friends and family members?

I love them dearly, of course! But we have still decided that this is a necessary precaution.

You see, as a society, we talk about stranger danger all the time.

But we are naive and misguided if we believe that strangers at the playground luring kids with candy are the biggest threat to our children.

The stats clearly demonstrate that people we know -- people we openly invite into our homes, people we willingly give one-on-one access to our kids -- are much more likely to be the ones to hurt them.

But don't you think you can tell who's trustworthy and who's not?

No, actually, I don't. And I don't think you can either.

Again, we're misguided if we believe we can tell a perpetrator from a non-perpetrator just by looking at a person -- or even by knowing them personally.

There is no typical profile of a sex offender. They don't all look creepy, and they won't all set off your Spidey senses.

That means that for this strategy to work, we have to apply it across the board. We can't let any teenage or adult male be alone with our children.

The minute we begin saying, "Well, you seem OK so you can watch my kids alone," or "Well, since you're such a close friend or family member, we'll make an exception for you," the strategy stops working.

But come on, you can't control who your kids are with every second of their lives. You can't GUARANTEE they're not going to be abused.

That is once again true.

But we have decided that just because we can't control every second doesn't mean we shouldn't put some perimeters in place where we can -- perimeters that may very well increase the likelihood of our children remaining safe.

But let me tell you a secret about the real reason this drastic measure works.

It's actually not about the alone time with males. Sure, that decreases the chances that potential perpetrators will have access to my children.

But what it's really about is the fact that having this family policy in place forces us to talk openly -- sometimes even in casual conversation -- about preventing our kids from being sexually abused.

We're talking about it constantly.

We're talking about it with everyone.

"Hey, sorry, you can't babysit our daughter alone because we have this family policy..."

Or "Let's find someone else to go along when you take our son to the park because we have this family policy..."

The conversations are awkward sometimes, but in the end, they are the real deterrent.

By talking about our hyper-awareness of the possibility of our children being sexually abused, we're basically sending a crystal clear warning to anyone who would even consider harming our children.

Don't even think about it because you'll never get away with it.

You can protect your children too by sending this warning right now.

Start talking openly about the things you're doing to keep your kids safe.

Start letting others know that you're educating your children about who can and cannot touch their bodies.

This post was originally published on the site Pick Any Two.

More:
parenting adviceParenting Sexual AbuseParentsmodern parenting
Newsletter Sign Up
Raise the kind of person you'd like to know
Subscribe to our parenting newsletter.
Successfully Subscribed!
Realness delivered to your inbox