Turns out, the black and blue (or, perhaps, white and gold) dress that has undoubtedly taken over your newsfeed in the last 24 hours actually began as one woman's mother-of-the-bride dress.

The viral dress belongs to a British mother named Cecilia Bleasdale. She wore it to daughter Grace Johnston's wedding earlier this month, according to the Daily Mail. 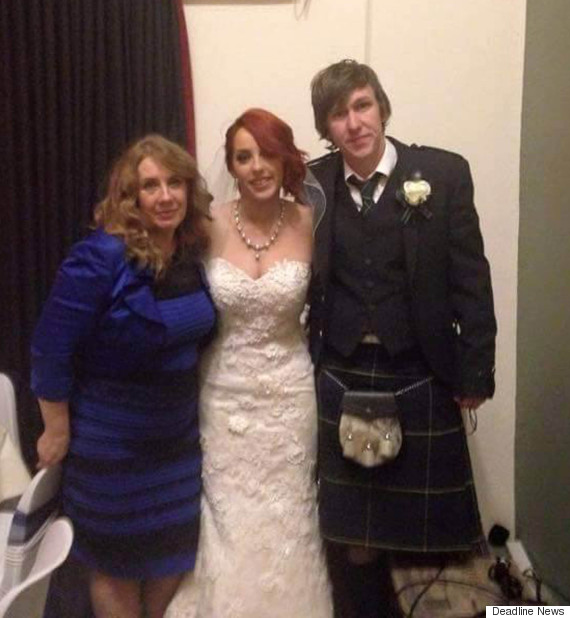 It all started when Bleasdale sent a photo of the dress, purchased at U.K. retailer Roman Originals, to the bride and later to her other daughter, Angie McPhee.

"Mum sent it to Grace to give the dress a thumbs up or thumbs down," McPhee told the Daily Mail. "It was sent originally to my sister, then my mum sent the picture to me, and Grace said, 'Why is she wearing white and gold to the wedding?' We were shocked my mum had chosen a light-colored dress."

According to Business Insider, Johnston and her then-fiancé also disagreed about the color of the dress, so they posted a photo of it to Facebook where the debate continued. That's when friend and 21-year-old Scottish folk singer Caitlin McNeill, who performed at the wedding, shared it to a Tumblr fan page dedicated to talent manager Sarah Weichel. From there, the debate just exploded -- with celebrities such as Taylor Swift, Kim Kardashian, Mindy Kaling and Julianne Moore chiming in.

As we're sure you know by now, the dress is officially black and blue, as confirmed by Roman Originals. The reason so many people saw it as white and gold is likely because of a phenomenon called color constancy, as explained by this video from AsapSCIENCE.

"People who picture the dress as white have brains who may be interpreting the dress in a blue-lit room, for example -- as in it's near a window with a bright blue sky," the narrator states. "It makes perfect sense then that the white dress would be tinted blue and that the gold color wouldn't really change. On the other hand, the brains of people who see it as black and blue may be interpreting the dress in an artificially lit setting, like somewhere with yellow lights. As a result, the brain sees the gold as just a reflection off of the black and believes the blue has been unaffected."

More:
the dressTheDressweddingswhite and gold dressViral Dress
Newsletter Sign Up