Never have I been driven to the brink over something so ridiculous. And yet ...

When the image started going around from Caitlin McNeill's Tumblr site on Facebook on Thursday night, I was baffled that people were seeing a blue and black dress. What the hell? I was seeing a white and gold dress that was very poorly lit. Really, just terribly lit. But in reading the comments, over and over I saw people disagreeing, people who were sitting in the same room, looking at the same image on the same devices and seeing completely different things. Not just little differences, like the white looked gray-ish, but that it was unmistakably, vibrantly blue.

I'm a trained painter and professional graphic/web designer and illustrator. When you study color theory, you learn how colors can affect one another based on proximity to one another and how our eyes can play tricks on us. No matter how much I tried to get my brain to see that dress as blue and black, it was NOT happening. I looked at the image on my phone, my laptop and an iPad, they all looked the same to me.

I was convinced that I was right. Of course I was! As a professional, I also know that my monitor is well calibrated and dammit, I know colors when I see them. At that point, even Buzzfeed's poll was supporting Team White & Gold by 75%.

I showed the image to my husband, also a designer and photographer. Surely, he would see a heavily shadowed white and gold dress... Nope. Looking at the original image, the one in the middle above, he saw periwinkle and charcoal gray; fancy words for blue and freakin' black.

Like everywhere else in the world, apparently, we argued and tried to convince each other to see what we were seeing, eventually shaking our heads that the other could be so clearly wrong.

The next day, Wired.com dropped some science on the Internet. Citing "primal biology and the way human eyes and brains have evolved to see color in a sunlit world," the article outlines precisely how I could be so wrong. My husband was overjoyed.

After thoroughly wallowing in his victory, my husband turned to me and said, "I always wondered why you used such odd color combinations in your paintings, I figured it was an artistic choice."

He had to be kidding... right? I mean, he WAS kidding, wasn't he? This damn dress had thrown my confidence about the colors I was seeing (and using) into question.

What we really needed was a decent picture of the dress ... 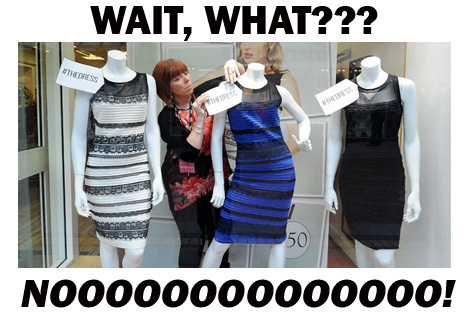 Crazy as it may seem, I'm still not sold. I am convinced that any minute now, we are going to see that the dress also comes in white and gold... somebody PLEASE tag me when it does. I am going to gloat so hard.

Jessica Ziegler is the co-creator of ScienceofParenthood.com where she uses color correctly all the time. Follow her on Facebook.