A few weeks ago we got a copy of a book called The Drunk Diet [St. Martin's Press] in the mail. It's a memoir by Lüc Carl, Lady Gaga's ex-beau, a former Lower East Side bartender with 80s hair to match his 80s hair metal mentality. The cover is enticing if not for all of its glam and purple glitter, then for its tagline: "How I Lost 40 Pounds... Wasted."

So we did what any rational literary journalists would do and met up with Lüc to get drunk and discuss dieting, marathon training and Brett Michaels.

As we waited for him to arrive at St. Jerome's, the bar Lüc used to own and tend, we took in our surroundings. It's the quintessential metal head dive, complete with a disco ball, smoke machine and no shortage of leather motorcycle jackets.

When Lüc strolled in, he apologized for both his tardiness and the state of his hair, but let us know that we shouldn't fret - he had plenty of hairspray in his bag.

"Turn that music up so I can flirt with these girls," he told the new bartender before requesting a "Happy Meal," a shot of whiskey and a beer. We stuck with a gin and tonic and a vodka soda ("nail polish remover," quipped the bartender).

Now we were ready to talk dieting.

Lüc told us he simply woke up one morning and had had enough of being chubby (he was a size 12 in "chick's jeans"). That evening, he went for his first ever jog--about a mile and a quarter in each direction. "It was terrible," he told us.

For the next step towards his weight loss goal, he scoured the health section at Barnes & Noble. He ended up reading over 15 diet books, but says, "if you've read one, you've read them all."

Lüc also has a bone to pick with Gatorade (he does so in a section of the book dubbed "What the fuck are electrolytes?") and dining out.

"I have a phobia of eating at restaurants," he said. "When I was fat, I felt like people would stare at me like, 'Why's that fat guy eating?'"

Instead, Lüc eats egg whites and oatmeal for breakfast ("mixed together in a coffee cup"), nuts ("good for the hair"), protein and pita wraps for lunch and a big salad for dinner. His guilty pleasure? Beer, of course. When asked if he would ever opt for a light beer, he told us "not in public."

While chatting about meal routines, drinking another round of battery acid and listening to Lüc's radio show Hair Nation ("I like listening to myself," he noted), we were interrupted by a ringing phone.

He may be a metalhead but he's also a churchgoing, family-loving guy from Omaha, Nebraska. Perhaps that's what reeled in Lady Gaga, but we can't be sure. When asked about his ex, Lüc told us, "I didn't date Lady Gaga. I dated a 19-year-old girl with a fake ID."

He'd much rather chat about his marathon training, "the most important thing in [his] life," and no doubt the reason he's able to stay in shape in spite of his beer-drinking. In the last year, Lüc has run four marathons. He runs between 50 and 75 miles a week, and aims to eventually compete in The Boston Marathon. He recently partook in The 1576 Steps, a race to the top of the Empire State Building. "I got 17th place," he proudly told us.

We revealed that running a marathon was a goal of ours, too, and he was even thoughtful enough to send a follow up e-mail the next day on the first steps of training.

In case the get-up didn't clue you in, Lüc's other passion is music. But he doesn't like to mix the two--no iPod when he runs, as it's a distraction from his breathing. Though he grew up in the 90s, he related that he truly lives in the past, in a "parallel time continuum." He longs for the 80s, the days of AC/DC and Poison.

After a round of whiskey and tequila shots (which was a total of 2 drinks, 1 shot for us and 4 shots, 1 beer for him), we're pretty sure he walked us to the nearest burrito joint where we completely ignored all of the advice he had given us about avoiding carbs and dairy by scarfing two orders of chicken enchiladas and guacamole. We were drunk, after all.

And although we're still not sure "what the fuck" electrolytes are, we didn't hesitate to grab some Gatorades the next morning to cure our horrible hangovers.

All photos courtesy of Zoë Triska.

'The Drunk Diet': How To Lose Weight...Wasted
Gallery 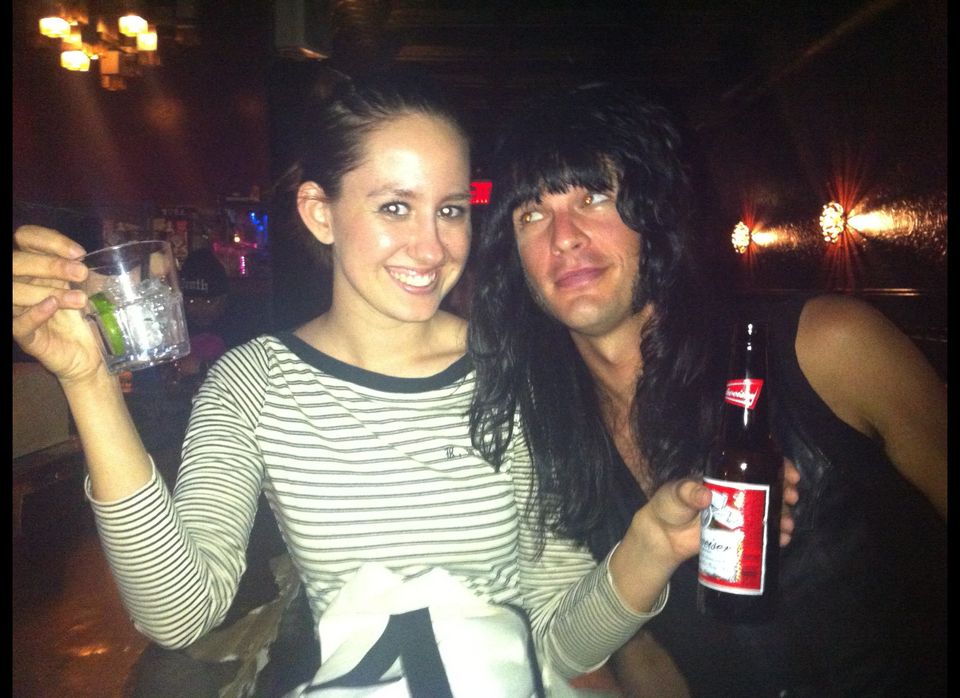