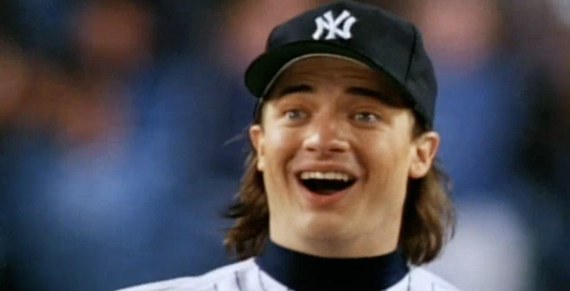 The Scout had a lot of things going against it from the outset. It was a baseball movie that came out in the fall of 1994, during what would become Major League Baseball's most notorious work stoppage (it eventually canceled that year's World Series). People were angry at baseball in 1994, so no one was really in the mood to watch a movie about baseball -- let alone a bad movie about baseball.

Because of its unfortunate release date, The Scout was swept under the rug as a forgotten oddity of sorts. What is lost in all of this is that The Scout had quite possibly the dumbest ending of any movie about baseball that was ever made. (And I write this knowing that at the end of The Fan, Robert de Niro somehow snuck onto the field, posed as an umpire, and almost killed Wesley Snipes' Bobby Rayburn while the San Francisco Giants inexplicably played baseball during a monsoon.)

The Scout starred Albert Brooks as a down-on-his-luck scout for the down-on-their-luck New York Yankees (which is a strange thing to write, but The Scout was made two years before the Yankees actually started winning championships again in real life). On a trip to Mexico, Brooks' scot discovers a phenom named Steve Nebraska (which is a fun name; he's played by Brendan Fraser) who is both a tremendous hitter and pitcher -- but also mentally unstable. Anyway, whatever.

If you don't want to be spoiled on how The Scout ends, you should stop reading now and also possibly consider reevaluating your life.)

Even though I've lived in New York City for the past nine years, I was born in St. Louis and will always be a St. Louis Cardinals fan. (If you happen to follow me on Twitter, you are well aware of this as of late and I apologize.) I mention this because over the course of my life there have been very few movies that feature the St. Louis Cardinals. There have been movies about the Cleveland Indians. There has been a movies about the Minnesota Twins. There has been a movie about the Detroit Tigers. There has even been a movie about the Chicago Cubs. It's really rare to see the Cardinals depicted on a movie screen in recent history -- well, other than the dumb, dumb ending to The Scout.

At the end of The Scout, Steve Nebraska (after much drama) leads the New York Yankees to the World Series. In this particular fictional World Series, the Yankees are playing the St. Louis Cardinals. Now, we're down to the final out of Game 7 and, stepping up to the plate, is ... Ozzie Smith.

Ozzie Smith is one of my favorite baseball players of all time. Ozzie Smith was a pretty okay hitter, but is considered to be the greatest defensive shortstop of all time, which is why Ozzie Smith is in the Baseball Hall of Fame. We are told by Bob Costas' voiceover (watching this scene again, you can actually hear the contempt in Costas' delivery; I assume he used the same contempt when he endorsed his check from 20th Century Fox) that Ozzie Smith has been on a power surge as of late which means that we, as the audience, should be nervous because Ozzie Smith just might hit another home run. This is ludicrous.

Ozzie Smith hit a grand total of 28 home runs. Not in any one particular season, mind you, but from Smith's lifetime total over 19 years in the Major Leagues. The year that The Scout takes place, 1994, Smith had hit three home runs. I understand that Ozzie Smith just might be a name that an audience watching a baseball movie would recognize, but to put him as the last dramatic hitter -- a power hitter, nonetheless -- is complete nonsense. Was Matt Williams not available? Fred McGriff? Or really any other Major League player from 1994 who had hit more than three home runs?

(To put this in perspective, Ozzie Smith's most famous moment was when he hit a home run in Game 5 of the 1985 National League Championship Series -- precisely because he had never hit a home run while batting left-handed in his career.)

You'd think someone would have said, "Hey, guys, Ozzie Smith is not really the best choice for this scene." It would be like Keith Richards being portrayed as the one of the greatest vocalists of all time.

Good baseball movies are few and far between, which is a shame. For better or worse, studio movies today are driven by how they will perform internationally and, as you might guess, baseball movies perform quite terribly in that respect. Movies will ask us to suspend our sense of disbelief to enjoy the greater story. And I've seen a lot of unbelievable things over the years as a movie watcher, but no movie has asked me to suspend my sense of disbelief more than the ending of The Scout. The Fan is certainly more preposterous, but The Scout's ending is just lazy and dumb.

Steve Nebraska strikes out Ozzie Smith to end the game, by the way. Of course this happened -- Smith was a career .262 hitter.