Harry Truman saw a great deal of misery in his life resulting from war.

In WWI he served as a captain of Missouri's Regiment Battery D, serving in France. He watched as men he had grown up with as boys fell around him. Then as Vice-President and then President during WWII he saw more unspeakable horrors of what people can do to others...

There was always something that bothered him about the presidential seal. While the seal had several small changes through the years in design, he made a major change in the meaning of the seal which stays with us through today.

Notice something about the talons of the eagle. One talon grasps a shaft of arrows, symbolizing war-like might. The other firmly holds an olive branch, long-held as a symbol of peace.

We have all heard the phrase "offering the olive branch," meaning let us be the first to make peace in difficult situations, whether in personal relationships or relations between countries. 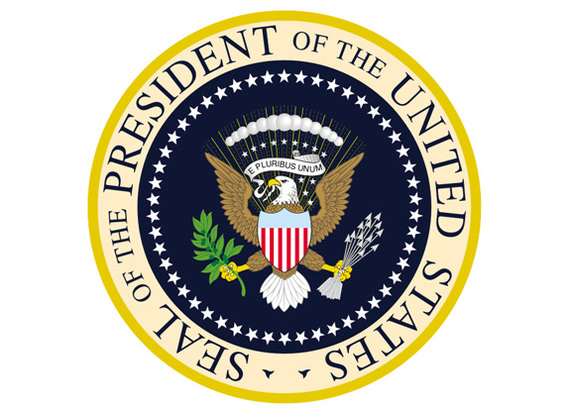 By changing the direction of the eagle's head, looking to the branches of peace and hope, Truman symbolically reminds us that the olive branch is the direction we should employ first, before using other means of power to direct our relationships.

All of us have the ability to carry two means of power in our hands... one being filled with olive branches, the other with more destructive methods.

I pray that in my life that I hold fast to the truth that the power of the branch of the olive, that the power of compassion, caring, empathy, and love hold more might and glory than the other... and remember that as a person of faith, it is the direction I feel that our God, no matter the faith we might embrace, would have us employ.

Let there be peace on earth... and let it begin with me... and let me remember it, each and every day, this day, and each that follows.

Cop Seen On Video Grabbing Fellow Officer By Her Throat