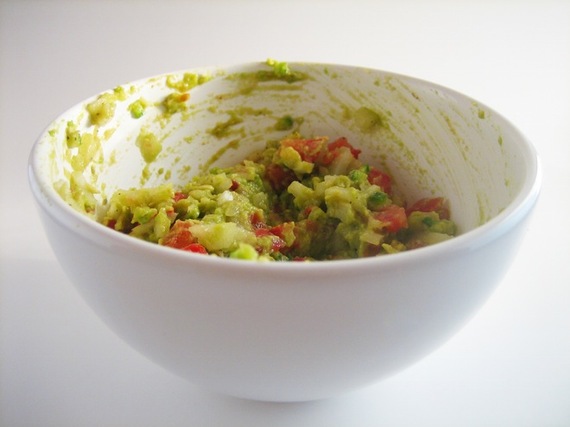 For a relatively simple side-dish to snack on, guacamole sure manages to piss people off. Fortunately it's also idiot-proof, welcoming whatever spices and vegetables you want to Frankenstein around with. I don't know much about food -- a big night out for me involves extra Shack Sauce -- but I do know what tastes good to me. And even I can rock a guacamole that will change your whole day in about three minutes.

Earlier this year the Old Gray Lady sent the internet into conniptions when food columnist Melissa Clark sullied the good name of guac by suggesting that peas (peas!) were an essential ingredient. No less an authority on simple ensembles than Jack White fell into the fray when his own guac recipe went public in a leaked tour rider. But the New York Times and Jack White don't know guac from squat. The saying has been the same since you first heard it in grade school: Keep it simple, stupid.

Here are three variations to weigh against your levels of laziness and funds. All serving sizes are for two people.

2 large Hass avocados
1 lime
This one is a minimalist's dream. Start by cutting the two avocados in half the long way and pulling out the pits. Use a knife to score the avocado innards, and then scoop them into a bowl with a spoon. Mash the lumps until it turns semi-chunky and let it sit for a second. Quarter the lime, squeeze the juice from each quarter into the avocados, stirring between each quarter. Throw the pits in to keep it from browning.

2 large Hass avocados
1 lime
1 large white onion
This one is for the folks who are still pretty lazy, but who got a wild hair in the produce department. After cutting the avocados and lime, dice half the onion into small, square bits - not chunks. Save the other half for later, or if you're a weirdo and love the overwhelming taste of onion, cut up the rest. Same steps as above, but add the onion bits after stirring in the squeezed lime juice. You'll get pungent crispiness with your smooth avocado and your tart lime.

2 large Hass avocados
1 lime
1 large white onion
1 large tomato
1 sprig of cilantro
1 pinch of salt
Six ingredients, I know, crazy. But the extra two bucks and five minutes is worth it. You'll notice we're not using peppers. No serranos, no jalapeños, no nothing. People seem to like burning their damn tongues off when dipping their tortillas into sweet, sweet guac heaven, but try to resist. Guacamole should be smooth, chunky, and citrus-y. People who like their guac spicy are really just closeted salsa fetishists.

Do every step from the Three Ingredient method above. Take the large tomato and cut it in half, then carefully scoop out its seedy, watery entrails. The goal is to use the crispiest parts: Chop the tomato half into slightly larger bits to offset the size and the flavor of the onion. Stir the tomato into the guac. Remove the cilantro leaves from the stem and dice them into fine pieces -- tiny, so you don't feel like you're eating a miniature salad. Stir them into the guacamole bowl making sure they're evenly distributed throughout. Then, toss on the pinch of salt and serve. You now have the best simple guacamole ever, and it only took like six minutes. You're welcome.

Photos via Giphy and www.flickr.com/photos/crd