The inequality of income has not been this high in the US since the Great Depression (see Figure below). According to some estimates, the inequality of wealth is even higher, even though its measurement is more problematic than that of income. How will these large disparities affect the economy in the future? Although no definite answer has been provided yet, the recent academic research gives some clues on what can be expected. 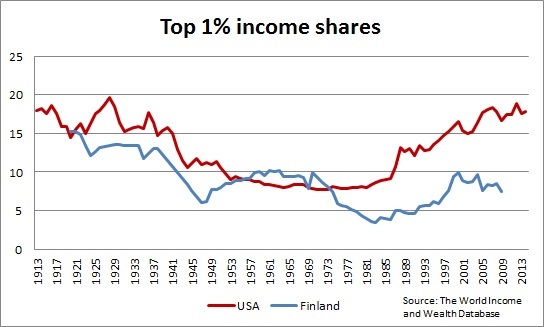 Above all, we should be able to predict the effects of income inequality on economic growth, which was the topic of my doctoral dissertation. Theoretical research shows that this effect can go in both directions, that is, from inequality to growth and vice versa (see Chapter 1.4 for more details). We have rather solid empirical evidence showing that income inequality and gross domestic product move in tandem (see for example this and this), but it is unclear which of the effects, if any, dominates. B. Atems and J. Jones make an attempt to disentangle these effects in their recent article. Using data on the US states, they find that high income inequality diminishes economic growth, instead the other way around, and this effect is persistent implying that increasing inequality has a negative long-term effect on economic growth. Inequality may also have different effects in poor and rich countries. Although more research is needed, the available empirical evidence indicates that income inequality has negative effect on economic growth in rich economies, in particular (see also the research by the OECD).

What could the channels of this (possible) negative effect be? In the US, income inequality may diminish education opportunities for the poorer, if they cannot afford the tuition fees. This may keep the level of human capital and the level of specialization lower than what would be optimal for economic growth. Income inequality is also found to affect negatively on health diminishing productivity and growth.

If income inequality does indeed lead to slower economic growth and to financial instability, how should it be treated? I am not a big fan of the "Piketty doctrine", which states that taxes should be higher to cope with inequality. Taxes only transfer funds from private to public sector and it is obvious that public officials are not very good in allocating our funds (if they were, Soviet Union would have been a great success). Finland has high taxes and quite equal distribution of income but a stagnating economy, and not just because of the euro.

Although Finland is a rich country, we are rather poor when it comes to private wealth. The richest percentile in Finland only owns around 13 % of total wealth, while the richest percentile holds almost 30 % of the total wealth in Sweden (link, in Finnish). Venture capital, which the highest income earners provide to start-ups and to small and medium sized companies (SMES's), is crucial for the success of new firms and thus for the success of a country as a whole. Because our income and wealth are so equally distributed, Finland has only limited amounts of venture capital available which constrains the birth and growth of new firms. Our SME's also suffer from the lack of equity, which hinders their possibilities for expansion. In addition, the indirect costs of employment make it very costly to hire a worker, which increases unemployment. This combined with the high level of taxation diminishes the income available for private consumption and saving.

So, in Finland high taxes and other tax-like indirect costs are currently a major burden to the economy. However, there are two things in the Finnish system still working for the benefit of the economy: free (publicly funded) education and healthcare. The point of the Finnish system is that no one should be excluded from education or healthcare based on their level of income. Such measures are preferable to diminishing income inequality also in other countries, because they tend to increase the productivity of a nation and thus lead to faster economic growth.

When people talk about income inequality, it should also be remembered that, while inequality has grown in the rich countries during the past 30 years global poverty has diminished radically during the same period. The globalization and free mobility of capital has thus lifted hundreds of millions of people out of poverty, while they may have hurt the working class in rich nations, like the US and Finland.