For an instant, his finger twitches. Should he honk the horn? “Does this have to happen right now?”

Dimitris is a taxi driver in the Greek capital, Athens. He has been driving hundreds of thousands of tourists for the past 20 years. I am his fare today. A garbage truck is inching along in front of us as it stops to pick up black garbage bags lining the street. The street is so narrow that we can’t pass the truck and traffic is building up behind us. “What can you do? They are just doing their jobs too.”

Public services never really worked very well in Athens, Dimitris explains. But switching garbage collection to a day-time operation is absurd. “The city no longer has the money to pay night shift overtime premiums,” he says.

Dimitris comes from Lesbos Island. He came to Athens when he was 13. That was 35 years ago. A lot has changed since then. Especially since the 2004 Olympic Games. 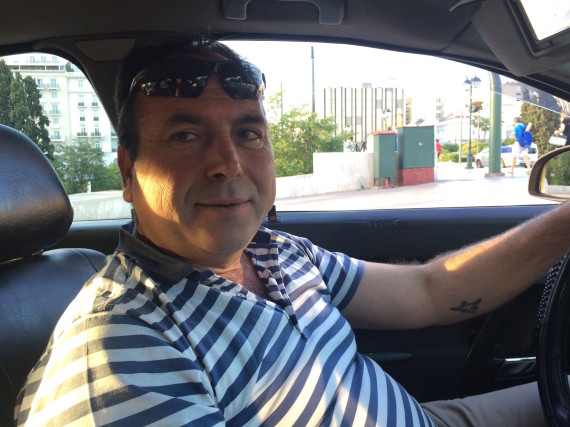 At that time, the city had new subway lines built and spent billions on ultramodern stadiums. Now, many of them are in ruins and seldom used. But the tourists are still coming. In 2014 alone, 24 million people vacationed in Greece and brought the country 50,000 jobs.

But what does that really mean when nearly one-fourth of the country’s population lives at the poverty level and can hardly afford medicine, if many people don’t have money to eat and would not be able to survive without a daily trip to the soup kitchen?

The garbage truck made a turn off the road and we are now driving at normal speed again. Dimitris tells me about his wife and three kids who grew up in Athens. “We’re getting by,” he said when I asked him how much money is left for his family by the end of the month.

Dimitris is about to say something else when he suddenly turns the steering to the right and stops. 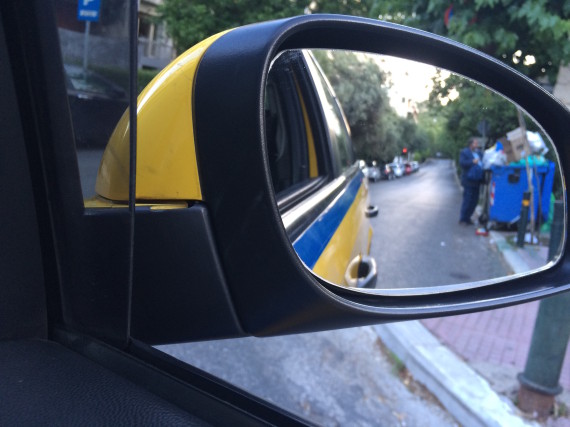 “This is Greece today,” he says and points to the right rearview mirror. A middle-aged man behind us is looking for food in a dumpster. “He has nice clothes. He was probably a professor,” Dimitris says and slowly drives on.

We drive past Syntagma Square, the heart of Athens and the center of protest. Young people assemble here regularly to demonstrate against the European Union, against German Chancellor Angela Merkel, and in opposition to the Greek government.

It is quiet today on the square. However, that may change next week if the Greece's creditors force the country to agree to new austerity measures. Pensions may be reduced and the general sales tax may be raised. It doesn’t take an expert to surmise that this would lead to a humanitarian crisis.

“Many Greeks are afraid that Tsipras will not stand up against this, that there are already plans in the works for new austerity measures but that they just haven’t been announced yet,” Dimitris says, referring to Greece's Prime Minister Alexis Tsipras.

I wanted to know if Dmitris sees an answer to the crisis. The “Grexit,” (the “Greek Exit”)? “Heavens, no! We are only a small country! We need friends to survive,” Dimitris replies.

But he also knows that to a certain extent his country must save itself. “Stop giving us more money,” he says. “It’s just feeding the vicious cycle.”

The more loans are disbursed to the Athens government, the larger the problem, Dimitris says. He doesn’t know how much money Tsipras & Co. needs to restructure the country. Engrossed in the conversation, I am unaware that Dimitris started making a detour, taking me on his own route to show me and acquaint me with the city. Now, he is driving me up to Lycabettus, the urban hill that overlooks Athens.

Dimitris is proud of his country. He mentions the clean water in the cities, the philosophers, the good weather, and democracy. I have the impression that the crisis has really upset him.

“Look at what a paradise we live in,” Dimitris says as we are looking over the hill and gestures beyond the tops of the white-roofed houses. “But for the rest of Europe, we are just a frail old man.”

On the way back downtown, I want to ask Dimitris what he thinks of Angela Merkel. “I like Merkel. She goes her own way,” he says. “Like all the Germans.” Dimitris wishes that someday more German businesses will settle in his country.

“That would help more than new credit,” he says.