SS Gestapo Chief Henrich Himmler's agents sped through the streets of Vienna on an early morning, March 11, 1938, to capture and eliminate Nazi Germany's enemies. One of his prime targets lived in a middle-class Jewish neighborhood at 28 Weihoffen St. Apartment 7. Ludwig Von Mises, a 58-year-old political philosopher, was Jewish and defenseless. Hitler deemed this man an enemy of the state and one of the top targets to be seized during the Nazi takeover of Austria. Fleeing from the city the day before, Professor Mises narrowly escaped to Switzerland.

Despite attempts on his life, Mises born in 1881, spent the 92 years of his life fighting totalitarianism that fed the actions of the Nazis, Marxist Socialists and other fringe groups. He believed that any kind of authoritarian government infringed on people's rights to worship, free speech, the right to travel and own businesses, all of which were banned by the National Socialist and Bolsheviks.

With cities like Detroit ($18.5 billion in debt), Philadelphia ($8 billion in debt), and Sacramento ($1.9 billion in debt) why are Mises disciple's voices silenced at major economic councils in Washington and throughout the country? Robert Reich, former Clinton Administration Secretary of Labor, singles out the huge economic and political discrepancies between the Tea Party and the Occupier movements sparked by the Wall St. government bailouts. In a recent series of articles in the Huffington Post, Reich cites the high correlation "between inequality and political divisiveness." He correctly points out that America was never so divided regarding income, wealth and power since the 1920s. What Reich fails to address are the conditions that fed the growth of extremist movements, such as the Nazis and Communists, which later imploded as a result of the economic policies of debt and printing money.

Mises, the modern day creator of the Classical Liberal movement (today also called libertarianism) destroyed the intellectual arguments of socialism by proving that it was impossible to allocate scarce resources effectively without private property and free-market prices. He showed that the more the state limited economic incentives to individuals, the greater the harm to low-income people and the general population. Centralized planning, something that was characteristic of all three types of socialism: the Nazis, the Fascists and the Communists, led to the ruin of an economy, and resulted in more and more tyranny and the rise of the totalitarian state. What economists failed to understand was that massive government spending and a authoritative centralized government would bring economic ruin to Germany, Russia, and many other countries.

Sooner or later government debt has to be repaid out of tax receipts. Our current revenue base is not strong enough to sustain a viable repayment program to service the debt. Today we create money -- billions a month -- to meet the debt repayments. As new money floods the market its value declines. The country experiences inflation destroying the savings, and pensions of its citizens. Similar conditions led to the downfall of the Weimar Republic. The rampant inflation of the 1920s in Germany was a contributing factor to the rise of Hitler, Himmler and the centralized planning of the ultimate socialist organization the National Socialist Workers Party (Nazis).

The recent bankruptcy of the City of Detroit is a harbinger of serious problems for the $2.9 trillion municipal bond market. Mises witnessed firsthand rampant government spending, overwhelming debt, and inflation in both Germany and Austria. The results of similar economic policies are threatening major urban centers around our country.

Author of dozens of seminal books and hundreds of articles, Mises works were studied by the Nazis in the 1930s as part of their assault on pro-democracy individuals, particularly those who were Jewish. Mises' unparalleled contributions to economic theory, which upheld a free market over one controlled by a coercive government, later fostered a world-wide movement. His books were significant for their discussions of money, credit, Socialism, central planning, and human action.

Mises' most remarkable argument for the free market came in his 1922 piece, "Socialism: an Economic and Sociological Analysis." In a Socialist state, there were no prices, essential to allocating resources. Prices signaled information simultaneously to both entrepreneurs and consumers. The centralized decision making over both production and consumption is impossible because of the complexity of an economy composed of hundreds millions of people and trillions of decisions every second. This insight gave Mises a greater appreciation of the value of a market economy, one that allows for the change of prices based on changes in supply and demand. The anticipation of future consumer demand impacts the output of entrepreneurs intent on meeting that demand in the future and thereby make a profit. This defense of limited government and the rights of all citizens made Professor Mises a threat to the ultimate central planners and explains why the Gestapo had sped to his home to arrest him.

Mises disciples today see the threat of government intervention in our nation's economy as seriously undermining economic productivity and self-starting growth. According to Peter Klein, a disciple of Mises:

People are increasingly disenchanted with mainstream Keynesian views of the economy. Keynesians were blindsided by the housing bubble and the financial crisis. Their response was to pump the economy with cheap credit and huge government spending which has only prolonged the agony. The Austrians led by Mises offer a compelling alternative explanation in which booms and busts are caused by central-bank manipulation of interest rates in vain attempts to stimulate or stabilize the economy.

Klein further points out that monetary central planning, combined with misguided housing regulation led the economy to produce the wrong kinds of goods and services. For Klein recovery means getting the government out of the way and letting entrepreneurs fix the mistakes.

According to Paul Wisenthal, the country's leading journalist authority on entrepreneurship education for young people, America was built on new small business development, led by its forefathers who were primarly entrepreneurs. He believes the U.S. may continue to diminish small business incentives as government expands on taxpayer dollars that don't exist.

Anyone wishing to learn more about this fascinating political philosopher should visit Hillsdale College, which houses the personal library and works of Ludwig Von Mises in Hillsdale, Michigan or the Mises Institute located in Auburn, Alabama. The world's top professional philosophers, economists, students and political scientists attend annual conferences to debate and discuss these ideas; true outcasts in a society haunted by the idea of large coercive regulation and antiquated tax codes on the world's population. 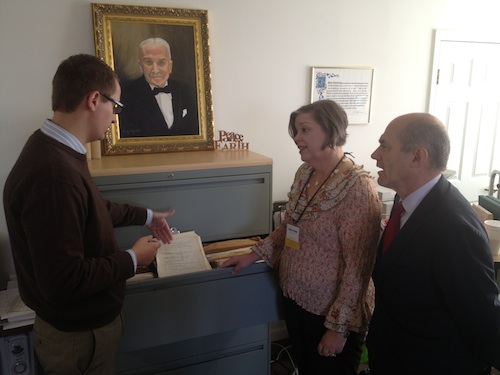 The author in the archives of the Mises Institute.