MADISON -- Wisconsin turned the national political calculation upside down Tuesday night by voting 57-43 for Bernie Sanders and 48-35 for Ted Cruz over Donald Trump. It is the first time the state have backed underdogs in the presidential primary since 1988. 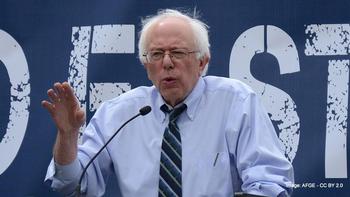 Exit polls show three-quarters of Democratic primary voters in were worried about the direction of the economy. More than half of voters in the Republican contest said trade with other countries cost the U.S. jobs.

David Obey, who represented Central Wisconsin in Congress for 41 years, explained why voters are worried. "Wisconsin manufacturing has been decimated by trade," Obey told the Center for Media and Democracy. Obey was a leader in the fight against Bill Clinton's NAFTA and World Trade Organization agreements in the 1990s. These pacts led to the loss of 68,000 manufacturing jobs in the state, and Wisconsin continues to bleed manufacturing jobs due to the U.S. trade deficit with China.

Central Wisconsin talk show host John "Sly" Sylvester agrees that trade is a central issue. Combined with more recent attacks by Governor Scott Walker on unionized workers, the result is that, "Wisconsin is in an economic death spiral when it comes to the middle class," says Sylvester. A 2015 PEW study showed that Wisconsin had the a 30-year high.

Successful candidates on both side of the aisle spoke directly to voters anxious about the economy.

Ted Cruz, who just a few months ago urged Iowa voters to "strap on the armor of God," abandoned his extreme rhetoric for ads that had him sitting at a kitchen table with a cup of coffee telling folks he was running for president "to restore opportunity, raise wages, and bring jobs back to America."

Oddly, the ad Donald Trump put on the heaviest rotation featured San Bernardino shootings and border security. He also bashed Scott Walker who is still popular with the GOP base at his first stops in Wisconsin. Walker later said it was like Trump came to Lambeau and "taking a whack" at Aaron Rogers or Brett Farve.

Although we don't quite buy the Packers analogy, these were significant missteps for a business executive who has been a consistent critic of free trade deals for many decades. Trump may have lost the majority of delegates in Wisconsin's unusual "winner takes most" system to Cruz or perhaps Sanders, but he did win 44 of the state's 72 counties, pretty much everything outside the reach of Wisconsin's right-wing talk radio.

On the Democratic side, Sander's ads touted him as the "only candidate for president who has consistently fought trade deals that have shipped our jobs overseas... Sanders opposed the disastrous NAFTA, opposed special trade status for China, and now he is opposing the Trans-Pacific trade deal."

Hillary Clinton's main ad, on the other hand, talked about education, with a smart smackdown of Governor Scott Walker's $800 million in cuts to public education.

But Does the Record Track the Rhetoric?

WKOW's Greg Neumann asked Ted Cruz to gives some specifics on how would restore manufacturing jobs to the state and the answer was baffling.

"It's a great question and the central question of this election," Cruz responded. "I will repeal every word of Obamacare, will pass a simple flat tax, and abolish the IRS. We will rein in the EPA and the federal regulators that are killing small business and we will stop amnesty and end Sanctuary Cities and the effect of all of that will be to bring millions of high-paying jobs back to America...from China, from Mexico," explained Cruz.

"You can do all those things and do a lot of damage, but not one of them is going to reverse the job loss created by trade agreements that promote offshoring or the flood of unfair imports that have slammed American workers over the last decades," said Wallach.

Until Cruz contemplated running for president, and he recognized he needed to be where the American people are on trade, he "systematically supported every element of the job-killing trade status quo," said Wallach.

Further, Cruz is against raising the minimum wage, an extreme position that puts him at odds with nearly 80 percent of U.S. CEOs from mid-to-large sized companies who support raising the wage in a poll recently uncovered by CMD.

Getting Specific on Trade and Investment

Sanders, on the other hand, has systematically opposed every major trade deal going back to the 1994 NAFTA, when he served in the U.S. House. He is actively working to defeat the Trans-Pacific Partnership (TPP) calling it "a disastrous trade agreement to protect the interests of the largest multinational companies in the world" and he is actively campaigning for the #Fightfor15.

Sander's gets specific calling for old trade agreements to be renegotiated and for a complete overhaul in the way that Congress handles trade agreements under the outdated "Fast Track" procedure. He has offered a plan for $1 trillion in infrastructure investment, which sounds big but falls a bit short of what experts predict we need just to keep up with failing bridges and dams.

She backed the Panama Free Trade agreement as Secretary of State.

Clinton didn't talk a lot about trade in Wisconsin, and she may have paid a price for it, says Sylvester.

"Sanders promised not to sign the TPP and Clinton has been far more vague. She has not made a promise not to sign it," said Sylvester. "She voted against CAFTA while she was a Senator under a Republican president, but for Sanders who the president is doesn't matter. For many, this is a matter of trust." Trust was also a big issue in the exit polls, with 89 percent of Democrats saying they trusted Sanders.

But fair trade "is only part of the problem for workers in Wisconsin," said David Obey. "We need labor laws reformed so that workers have the ability to bargain for wages and working conditions, then we need the education so everyone can go to college."

This is  an agenda Clinton can relate to. At the CNN debate in Milwaukee, she bashed Governor Walker, who crushed public sector unions in 2011 and private sector unions in 2015, for "ripping out the heart of the middle class." Later she said "to union members and friends of organized labor in Wisconsin, help is on the way," and Clinton will soon unveil a $20 billion proposal to bolster jobs in manufacturing.

But some worry that a focus on domestic manufacturing alone is not enough. "We can't balance our budget or move our economy forward with a $500 billion dollar trade deficit hanging over our heads. You have to open closed markets, balance our accounts, and renegotiate our old trade agreements," said Ohio U.S. Representative Kaptur, who, like Sanders, has campaigned against the trade agreements that have wreaked havoc on the Upper Mid-West.

Can Cruz Leverage His Victory in Wisconsin?

Will Cruz be able to translate his nice guy image and success here in the Badger State into a national victory? Unlikely.

Cruz was backed by a battle hardened right-wing establishment here in the Badger State that was not so much a fan of the Texas Senator as it was firmly in the #NeverTrump camp. Key to stopping Trump is denying him enough delegates to win the nomination outright.

Governor Walker held out his endorsement of Cruz until the last possible minute when Cruz was already ahead in some polls. Walker's big money friends at Club for Growth came in with a $1 million rotation of ads insisting that voters ditch Kasich and vote for Cruz as a means of stopping Trump. Influential right-wing radio talk show hosts gave Cruz a big boost by savaging Trump on a daily basis.

Trump started the race down in the polls here compared to other states and his performance nationally, and finished it with only 35 percent of the vote and 6 delegates.

Whether Cruz's newfound friends in Wisconsin will stick with him has yet to be seen. There is increasing evidence that the WIGOP and their big money allies are waiting for Paul Ryan to save the day at a contested GOP convention. Kasich-supporter, former Congressman Scott Klug said as much on MSNBC this weekend and now Charles Koch has weighed in suggesting that Ryan can win a contested GOP convention this summer.

As the campaign heads to a key primaries in Pennsylvania and New York, there is no doubt that candidates' views on manufacturing and the economy will take center stage. Already Wisconsin "nice" has been set aside in Pennsylvania. Clinton is questioning Sander's preparedness and Sanders is pushing back suggesting that Clinton may not be qualified to be president and citing, among other things, her support for free trade.