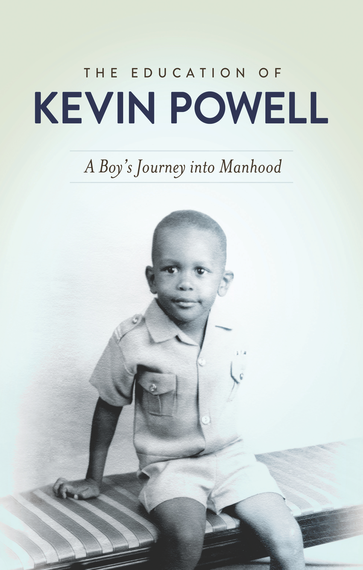 This post is an excerpt from the forthcoming book, The Education of Kevin Powell: A Boy's Journey into Manhood (Atria Books/Simon & Schuster) in which Kevin, writer and activist, vividly recounts the horrific poverty of his youth, his struggles to overcome a legacy of anger, violence, and self-hatred, and his journey to be a man and a voice for others. Available for pre-order now on Amazon.com


"The Education of Kevin Powell is a raw, deeply painful accounting of a life born of poverty, racism, abandonment, abuse, and complicated love. It is a memoir as much about a mother as it is about her son, a memoir born out of stunning writing and surprising vulnerability. A memoir of rage and insight, heartbreak and hunger. Powerful, brave, and unforgettable."
--EVE ENSLER, author of The Vagina Monologues

Intro
Fists pounded my face from every angle. I am so stupid for coming out into this hallway, I thought. I should've known they'd be out here waiting for me. I wanted to scream, but I resolved to take the beating as punishment for my life. As the blows torpedoed my nose, my eye sockets, my temples, and my ears, my mind staggered toward the possibility that I could die, and I imagined the damage: the deviated septum, the detached retina and the loss of vision, the loudness of sudden deafness, garbled speech. I saw my body days later--swollen, with lumpy clots around the gashes--being found in a park, decomposed and fed upon by bloated, fanged street rats. My mother would come to the hospital to identify me and scream--the kind of cry every ghetto mother saves for the day when it is her son who has died prematurely. I could hear my mother's anguished voice: "Lawd, I knew he would end up this way. He was always walkin' the wrong path."

Dang, what a way to go out! Beat down by some pissed-off Black men. I wasn't with that. I squirmed and ducked enough head blows to fold my bony frame into a ball the way they'd taught us in that Jersey City P.A.L. karate class--but the kicks and punches blasted through anyway. Blood--thick, bitter clumps of it--oozed between my teeth and gums. My eyes had swollen into puffy balloons, so I couldn't make out the faces through the slits, but the voices sounded familiar:

"We should kill this kid for that ISH!"

I wanted to say to those voices, "Yo, brothers! Don't y'all know who I am? I'm that kid from around the way. . . ." But they could not have cared less. I was just another Black boy who had played the wrong game and needed a good butt-kicking--

Once the men had planted me solidly on the tiled floor, I faked like I was out cold, hoping to get some mercy. "Get up, boy, you ain't dead yet!" Sturdy, leathery hands yanked me by my feet, and I was dragged down the hallway stairs, out of the building, into the parking lot next door. An electric-like current jolted my body, and I could feel my flesh frying atop the friction and heat of the pavement. Does anyone see any of this? I thought as heavy shoes and work boots pummeled my chest and rib cage.

For the first time I bawled loud and long--like an abandoned baby. Aaaah! These dudes are going to kill me! Flat on my back, I cupped the night's pitch-blackness in my outstretched hands and prayed silently--and I wondered if I were going to heaven or hell. The Lord is my shepherd; I shall not want . . . My mother told me to say that whenever I was in deep trouble. Maybe I had used up too many prayers. But the men, reeking of alcohol and now exhausted, hurled their legs and arms into me a few more times, then floated backwards to admire their work. As they turned away, I could hear them smacking palms and each other's backs, muttering, "Dang, we beat that kid down. . . ."

Available for pre-order now on www.kevinpowell.net

Author of ’The Education of Kevin Powell: A Boy’s Journey into Manhood'