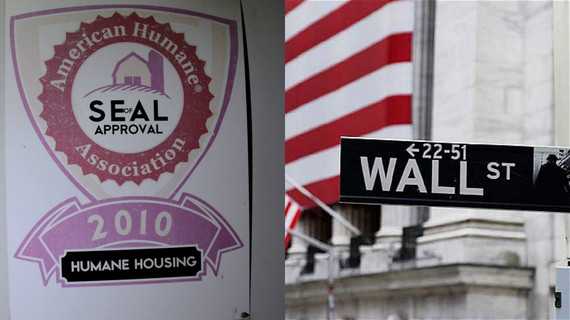 Could America's animal welfare regime be on the verge of a historic collapse?

On Thursday, the animal rights network Direct Action Everywhere (DxE) published an investigatory report and video exposé of a major egg supplier to Safeway and Trader Joe's showing hens crammed in filthy conditions, diseased, and dying by the hundreds. The disturbing footage was shot in California, where voters in 2008 resoundingly approved Proposition 2 (which barred intensive confinement of hens), and at a farm that was certified as humane by the American Humane Association.

The wide gap between appearance and reality, however, is completely unsurprising to those of us who are close observers of animal agriculture. Prior investigations by DxE have uncovered hens languishing in manure pits at a "certified humane, cage-free" egg farm. Another DxE investigation discovered that "free range" turkeys were actually being raised indoors in filthy industrial sheds. Freedom of Information Act Requests by the Animal Welfare Institute show that the United States Department of Agriculture (USDA), whose mission is to "promote agriculture production," has approved 80% of animal welfare labels without any supporting evidence to verify their accuracy. This is why Senators Diane Feinstein and Cory Booker recently wrote, "We lack confidence that [the USDA] can ensure that claims like 'humanely raised' are accurate and not misleading."

One cannot help but compare modern regulation of animal welfare to another failed attempt at reform that I have professional experience in: financial regulation. There, too, corporate giants have powerful incentives to deceive consumers about their business. There, too, the revolving door between industry and regulator undermines attempts to hold bad actors accountable. The result of such arrangements is predictable: consumer confusion, fraud, and even corruption.

The failure of reform in both industries demonstrates the need for fundamental, rather than token, legal changes. While Elizabeth Warren challenged the banking industry's stranglehold on our financial system by creating an independent consumer-centered financial regulator, true scrutiny of animal welfare is just beginning. DxE's investigations, which reveal the horrifying truth behind even the highest standards in animal welfare, show that a truly effective framework for animal protection must (like Warren's Consumer Financial Protection Bureau) see things from a different perspective - a victim-centered perspective.

Independent agencies must be created, not beholden to animal agriculture, to ensure that watchdogs have the incentive to prevent rather than promote misconduct. (Indeed, President Obama himself recently made a similar proposal to take food safety out of the USDA's hands.) New legal concepts, such as legal standing for animals, must be enacted to empower these agencies to aggressively defend animals as not just commodities but individual victims of abuse.

Animal industry, of course, is pushing us in a dramatically different direction. Seven states have passed so-called "ag-gag" laws that criminalize the publication of investigations such as the ones undertaken by DxE. These laws are brazen attempts to suppress consumer awareness about an inherently violent system. Instead of condemning abuse, they criminalize exposure.

This is not just unconstitutional but a breach of our nation's most basic ethical values. Americans care about animals, and we do not want to see them suffer. But the only way for us to truly achieve a humane future for animals is to look unflinchingly at the truth behind killing animals for food. And while what we see might very well disturb us, it may also generate the momentum needed to create a truly humane future for animals, one where we don't use or kill animals at all.