Late last week, Syria News Wire reported on the efforts of the Syrian Arab Red Crescent in sending aid to Gaza. The humanitarian group, which is a member of the International Committee of the Red Cross, has been successful in sending 11 lorries of 230 tons of medical products and food to Gaza.

According to Syria News Wire:

The Red Cresent is sending the trucks, after volunteers collected donations from people across Syria. They are carrying medical supplies and food.

They will leave Syria and enter Jordan, on their way to Gaza at 10am on Saturday. If you want to follow their progress, or donate, you can read their live Twitter feed here.

Anas Qtiesh, a translator for GV Arabic and a long-time volunteer with the Red Crescent, is working on the organization's web 2.0 efforts, providing Twitter updates on their successes, as well as letting followers know how they can support the efforts: 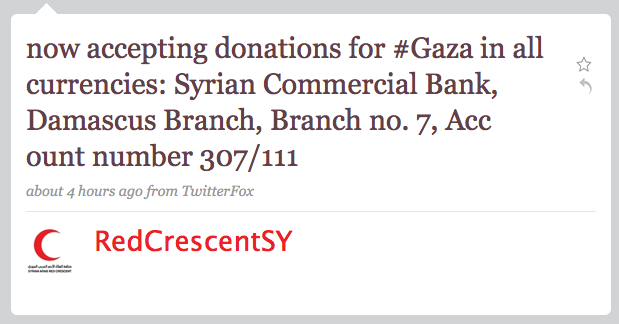 *Note: Due to U.S. sanctions, those living in the United States may not be able to donate to the Syrian Arab Red Crescent. A good organization to which U.S. residents can donate is the Middle East Children's Alliance.

Photographs of the convoys making their way to Gaza have been posted on Flickr:

The Red Crescent has also set up a YouTube channel where they will soon be posting videos of their work, and a Facebook group for spreading the word.