If philanthropists are truly interested in efficiency, value for money, and sustainability, I have a disruptive technology to offer that could save billions of dollars: the ego removal machine.

Most people involved in international development would agree that all too often, organizational and personal ego gets in the way of sound decision making. Concerns about the size of a logo, whose name is first on an invitation, and who gets credit for an idea can often trump matters of programmatic importance. The question of which organization's idea is adopted can be defended with more zeal than defense of the idea itself. Egos are messy, inefficient, and expensive. Most importantly, they take away resources from and reduce impact for the very people such egos purport to be helping: the intended beneficiaries.

As someone who has been the cause of ego-infused poor decision-making, I am familiar with the subject. In 2001, I launched a condom brand called fiesta as part of an HIV prevention program. The advertising agency provided us with several packaging designs and I had my heart set on a red bubble font (large sausage-shaped letters) for the brand name. However, almost everyone else preferred a logo that was multi-colored and included three smooth rings. But with my ego on the line, I dug in and maintained the bubble font logo choice because it was my product and my vision. Finally, we tested the logos with potential customers. They all preferred the colorful logo with the rings and I finally capitulated. We have subsequently sold millions of fiesta condoms and I believe that the packaging has much to do with it. The research results were undeniable- not even my ego could disagree.

A colleague of mine was once on the receiving end of an overly ambitious ego. His boss, the head of a prominent family planning organization, was co-hosting an event with the US government. Invitations had been designed with the government representative's name at the top. Late in the game, his boss decided he wanted to change the layout so that his name would be listed first. My colleague spent time, energy, and personal capital navigating political waters to see if an accommodation could be made. This was time not spent furthering the organizational mission.

My new machine would have solved these problems. While the engineering designs remain classified pending patent approval, I am at liberty to share the basic functions and applications of this remarkable device. The contraption is lightweight, portable, and able to run off both a 110 and 220-volt electric charge, making it perfect for office settings as well as far-away gatherings.

Once plugged in, the technology is intuitive and simple to use. The Suction Pump is simply held up to the participant's ear, a button is pressed on the Regulator, and the ego is seamlessly removed. An anti-bacteria filter helps prevent contamination while the ego is transferred painlessly to an easy-to-seal, air-tight container. Each Ego Jar™ is then labeled and secured.

With egos suppressed, wonderful decisions can be made about how to allocate and use philanthropic funds. With the best interests of their beneficiaries in mind, decision makers will focus on what really makes a difference and ensure this is done in the most efficient way, regardless of who gets the credit. Appropriations of resources, delegation of responsibilities, and related strategic decisions would all be determined by where they would have the greatest impact and not by which organization or individual is most published or praised. This would reduce wastage, increase effectiveness, and drive impact.

Once all such decisions have been made, the Ego Removal Machine can be quickly re-started and re-insertion procedures initiated. Easy-to-follow guidelines (translated into multiple languages) ensure that egos are not misplaced or re-inserted into the wrong participant. Of course, there would be some who, with egos back in place, might grumble about the decisions they made. But such individuals would be faced with the ineluctable fact that clear-minded decisions based on logic translate into better use of precious donor resources and improved lives for the beneficiaries at hand.

The Ego Removal Machine would save billions of dollars and provide other practical benefits as well. It would reduce the need for the many meetings and workshops that exist to feed organizational egos, streamline communications across organizations (because highfalutin CEOs would not be insulted when contacted by a low level factotum), and prevent countless territorial squabbles.

Just as so many new technologies and digital platforms have upended the established norms for doing things, the Ego Removal Machine could be a real game-changer. Patent pending. 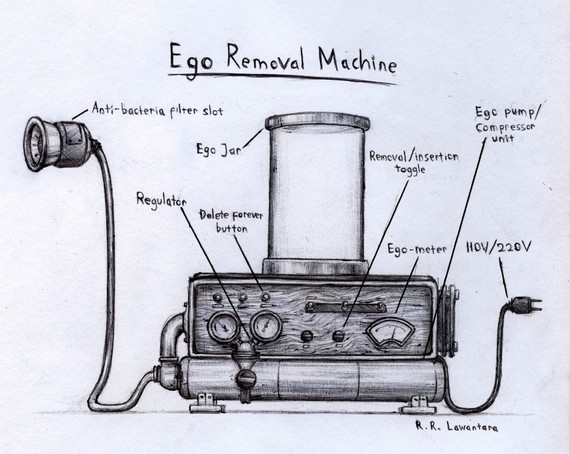 Christopher Purdy is the president and CEO of DKT International. From 1996 to 2011, he served as country director of DKT programs in Turkey, Ethiopia, and Indonesia, where he managed the largest private social marketing family planning program in the world. He served as executive vice president from 2011-2013. His professional interests center on advancing the cause of social marketing for improved health, and socially responsible capitalism.