America is the richest country in all of history. We have the largest economy and the largest number of millionaires and billionaires. At the same time, however, we lead the developed world in economic inequality. In 1965, CEOs received $20 for every dollar earned by the average worker. Today the gap is $354 to $1. 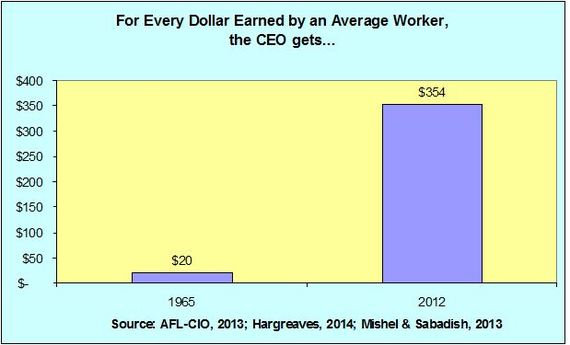 These are more than cold statistics. They also tell the story of a nation in serious trouble. Runaway equality is lacerating the fabric of our society. Here are a few of the festering wounds:

1. We are among the leaders in child poverty:
In the 1960s, Lyndon Johnson declared a war on poverty. We lost the war. Today, of all the developed nations in the world, America is near the top when it comes to the percentage of our children living in poverty. 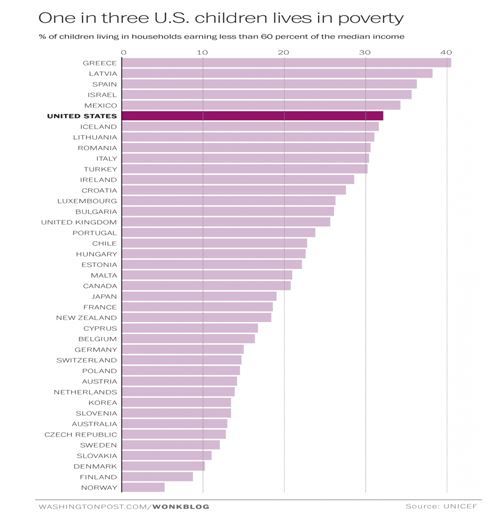 2. We lead the developed world in homelessness:
One of the most crushing outcomes of runaway inequality is homelessness. According to the National Coalition for the Homeless, homelessness has multiple causes including foreclosures, poverty, decline of work opportunities, reductions in public assistance, lack of affordable health care, mental illness, addiction and domestic violence. Many of these causes are directly related to and exacerbated by rising inequality.

As the wealthy deploy tax shelters both here and abroad, the money for affordable housing, urban shelters and public assistance has declined. Gentrification of urban areas has further driven up housing costs and pushed low-income residents from single room hotels, boarding houses and shelters. The housing crash, brought to us by Wall Street, dislocated many more from their individual homes and low-income rental apartments. As inequality continues to rise, we can expect runaway homelessness as well. 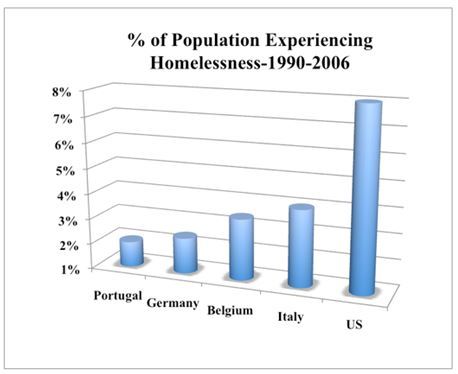 3. We lead the world in student debt:
We can find data that compares our country to others when it comes to student debt. That's because in most countries higher education is free. In fact, higher education once was virtually free here as well. After WWII, the GI Bill of Rights paid for more than 3 million veterans to return to school, tuition free. The bill also provided stipends for living costs as well. California and then New York also developed tuition-free state wide university systems. However, as runaway inequality set in, state and federal support for higher education did not keep up with tuition costs. The breach was filled by Wall Street, which profits mightily from the trillion dollar student debt market.

Our vision is so crippled by rising inequality that we consider student debt as a normal part of life. While Germany removes the few remaining tuition fees from its universities, our debate is limited to the level of student loan interest rates and caps that limit repayment to a certain percentage of future student incomes. Free higher education at public institutions is considered off the charts, outside the bounds of reasonable discussion, something raised only by unrealistic radicals. Even Elizabeth Warren won't go there. Meanwhile student debt continues to pile up with no end in sight. 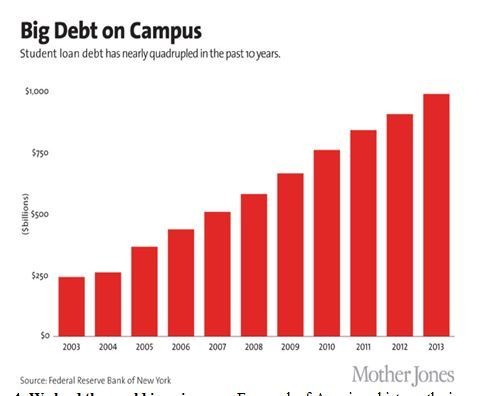 4. We lead the world in prisoners:
For much of American history, the incarceration rate was relatively low and steady, even during the turbulent 1960s. But as rising inequality took hold around 1980, so did the rise of our prison population.

Runaway inequality and the downward pressure on wages, especially for those at the bottom, create ideal conditions for a vast underground economy. Stiff sentencing laws and the War on Drugs colluded to fill our prison's and jails. For-profit private prison companies with Wall Street financing have pressed to keep the jails full and to expand them. 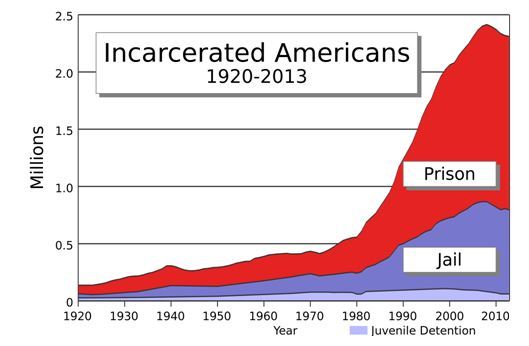 Historically, large prison populations have always been associated with totalitarian countries. But now the land of the free and the home of brave has the world's highest incarceration rate. What does that say about American freedom? 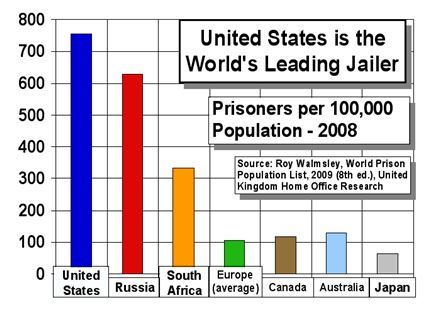 5. We lead the world in police brutality:
As inequality rises so does police violence. The deaths of unarmed black and Hispanic urban residents is deeply connected to the combination of overt discrimination and the difficulties in finding decent paying work in depressed communities. When it comes to police killings, we're second to none. (Chart based on police statistics since 2012 compiled by Business Insider.) 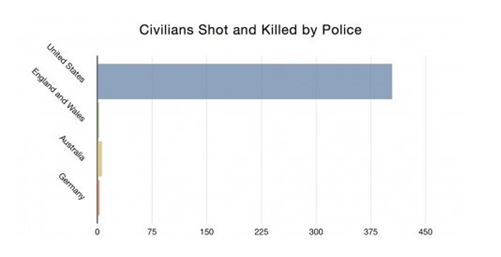 6. We lead the world in tax evasion:
No one enjoys paying taxes. But, we truly loathe paying taxes when corporations and wealthy individuals can buy a small army of lawyers and accountants to game the system.

For a generation we talked of corporate flight to low wage areas abroad. The next phase well underway is shifting corporate money and official residence to low tax areas so that the biggest American corporations pay little or no taxes at all. 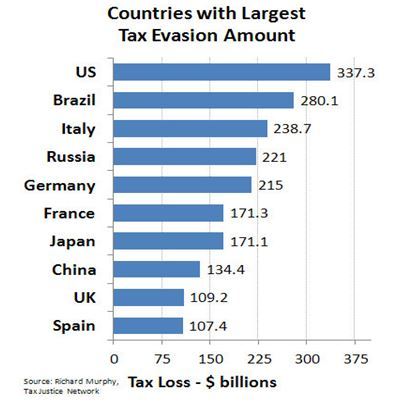 7. We have the world's most outrageous tax break for super-rich:
Runaway inequality gives the richest of the rich the nerve to deploy tax loopholes to reduce their taxes. They also have the power to subvert democracy by preventing politicians from eliminating these enormous giveaways. The most egregious example, the "carried interest" loophole, allows billionaire hedge funds and private equity managers to avoid billions in taxes that the rest of us, of course, have to make up. By allowing these billionaires to declare ordinary income as capital gains, this loophole drops their top rate drops from 39.6%, to 20%. We're talking big money.

Here's how it plays out. The top 25 hedge fund managers in 2013 collectively took in $24.3 billion dollars. For starters, that gives them an average income of $467,000 an hour. They make as much in one hour as the typical American makes in 9 years!

Their carried interest loophole reduces their taxes about $4.8 billion a year. How much is that in human terms? It's enough to hire 175,000 pre-school teachers a year or 76,000 registered nurses. Instead, it goes into the pockets of just 25 billionaires for no reason at all, except one -- they want it.

Both Democrats and Republicans refuse to touch the loophole. But they welcome with open arms the fat donations that come from the billionaires they are protecting.

8. We lead the world in declining Public Services:
A society scarred by runaway inequality will divide in to two very unequal sectors.

For the super-rich, the world of for-hire private services will cater to their every need. They live on patrolled estates, commute by helicopter, travel by private jet, educate their children in elite private schools, receive high quality private health care, and be treated differentially by politicians as well as the criminal justice system. They are hermetically sealed from homelessness and crime. Student debt is a non-issue except as a financial market to exploit. Poverty and fair taxes are far, far away from their day to day realities.

When your are the richest of the rich, America looks damn good. Your employees and servants fawn over your. Politicians and the media flock to be in your presence. You have the keys to the economic castle. You are the economic castle. You are the creator of wealth, the maker of jobs, the winner of the toughest competition on Earth. You feel you are only getting what you richly deserve.

Meanwhile the rest of us need and rely on our public spaces, our public services, and our public facilities. We use the schools and the roads. We need a vibrant public sector, but that too is slipping away. In fact, the more inequality rises, the more difficult it becomes to support a public sector, as the super rich and wealthy corporations do all they can to avoid paying their fair share.

We can see this most clearly by the decline of public sector employment. This job loss makes the delivery of every public service more difficult. It means longer lines, larger class size and fewer infrastructure repairs. This is especially pronounced since the Wall Street-created crash. 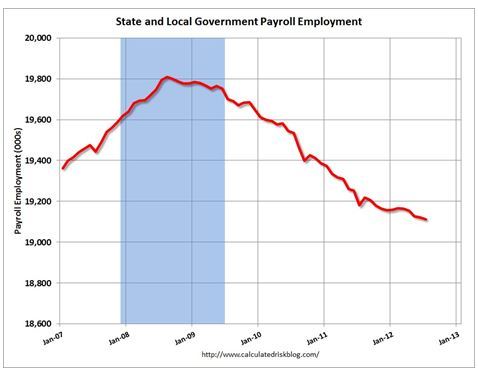 You can't bribe financial elites:
Liberal economists like Joseph Stieglitz, Robert Reich and Paul Krugman argue that rising inequality harms economic growth. If the economy had a less extreme distribution of income and wealth, there would more money in the hands of consumers, and therefore more profits for the corporations and the well-to-do. So even the rich would be better off if the rest of us had more.

But that wish is more like a bribe. In reality, the wealthy are running away with more and more of the nation's wealth. This is no incentive large enough to entice the captains of industry to reduce runaway inequality. It's working wonderfully... for them.

The powerful will never be persuaded by intellectual arguments from even the very best economists. Instead, history shows it will take countervailing power and a virtual uprising by the rest of us. For a short time, Occupy Wall Street focused the national debate on economic inequality. It will take a massive new movement for economic justice with staying power to remove the ugly scars of runaway inequality.

In this new year, let's hope we gain the courage to build it.

___________________
Les Leopold is the Executive Director of the Labor Institute in New York. He most recent book is How to Make a Million Dollars an Hour: Why Hedge Funds get away with Siphoning off America's Wealth (Wiley, 2013). He's currently working on a book on why the richest country on Earth is so poor.