Birdhouses hang everywhere in the dying Delta town of Elaine, Arkansas -- a distraction from the blight, neglect and century-old history of a county where hundreds of black men were lynched in 1919.

On Lee Street, a diner has "Open" and "For Sale" signs in a window, but no one is there.

The Elaine Fire Department is also empty, and the Elaine Public Library is closed. There are ruins of historic buildings - shells of brick and wood with empty window frames - on the town's main street.

Despite the decay, someone is trying to enliven the town. Birdhouses  with different shapes and designs hang from some of Elaine's most dilapidated structures bringing attention to neglect. They are evidence that someone cares about Elaine. Former teacher Pat Kienzle is trying to save it one birdhouse at a time. 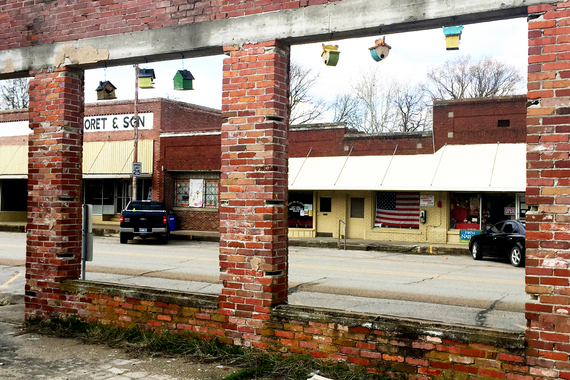 The retired Fayetteville school counselor was awarded a $23,000 Krista McAuliffe Fellowship named after the astronaut/teacher who died in the Space Shuttle Challenger Explosion in 1986. She used the money to create an educational program and reach out to Arkansas schools in under-performing districts. One was the Elaine School District five hours away.

Kienzle had never been to the Arkansas Delta before visiting Elaine. Today, she drives there at least twice a month to help operate the community center, a nonprofit organization that helps combat poverty.

"I would guess that there are some people who are just worn out from watching things go down," she said, seated inside the community center with birdhouses scattered around her. "For quite a few years, I would come and do activities with the kids. But then they lost their school about eight years ago. When I first started coming, you could tell that this community was kind of left behind, but since 1998, it's continued to just decline." 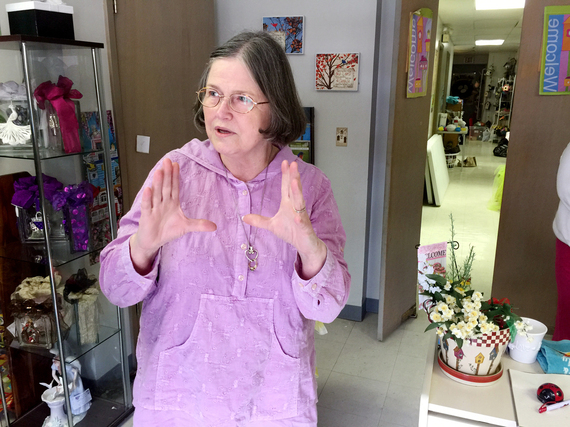 In the last nine months, Elaine's last grocery store and restaurant closed. School children are now bused to Marvell 30 minutes north. If Elaine residents need something, they must drive to Helena, 30 minutes away - past silver metal silos with angled tops, modest one-story houses, John Deere tractors and the Lake View community, where a number of trailers and motor homes are parked along Old Town Lake, and hundreds of leafless trees stand in the water like monsters rising from the deep.

Signs entering Elaine in both directions announce the population - 636 - a community smaller than some neighborhoods or blocks in metropolitan areas.

There is stillness and silence at Elaine High School, home of the Panthers. You can see posters through the windows on the walls, and a black dedication plaque says the school was established in 1984, but the doors of the building are locked with a thick chain.

Homes in Elaine range from shacks to middle class, and Elaine has two low-income apartment complexes.

Many buildings constructed in the early 1900s to 1950s are weathered, and rain has stripped away the paint.

Others are abandoned with broken windows. And the Elaine water tower, a white rusting landmark featuring the name of the town, can be seen from every direction.

Ora Scaife, 31, an administrative assistant with the Lee Street Community Center, greets people with a hug instead of a handshake. Scaife, who is African American, said the town remains racially segregated. That was demonstrated at the annual Easter egg hunt, predominantly attended by whites.

"Elaine used to be the place to be," she said. "Every Saturday, we would come to town. We would do our grocery shopping. Then, we would get our little household items and get some corn dogs from down at Wade's Grocery. As I got older, businesses started closing down. It kind of went up in smoke."

Scaife graduated from Elaine High School in 2001 and moved to Baton Rouge before returning to Helena.

"When the schools closed, Elaine took a hard hit," she said. "We had three restaurants that were open at one point, but . . Elaine has slowly started to decline. We still face racial issues like a lot of other places down in the Delta. . . We have what we call the white side of town and the black side of town. And to me, as a young adult, that is something I wish wouldn't be there. But I can honestly say, as the years have progressed, we have gotten along better."

Kienzle said she had been coming to Elaine for five years before learning about the tragic history of the town.

"There was a race riot here, and it possibly is the worst one we've ever had in our country," she said. "Because it's so isolated, they were able to keep it quiet." 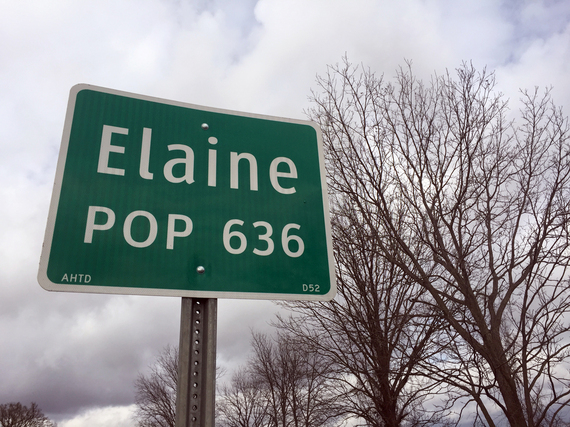 Today, one year after the turmoil in Ferguson, Missouri, race riots sparked by alleged profiling, discrimination and police militarization are still making headlines in America. But in 1919, Elaine, Arkansas, was the center of the country's deadliest race riot.

That year, a group of African American sharecroppers and their families gathered in a church just outside of Elaine. Their goal was to seek fair wages from white landowners for their labor. Someone opened fire outside the building crowded with men, women and children, killing some of the people inside, including a white deputy. Others fled, and several days of killings followed.

Whites stalked blacks like a hunting expedition, chasing them into fields where they were slaughtered. Many were able to escape by taking their families to the swamps where they hid several days before the Arkansas governor ordered the National Guard to come and restore order in Elaine.

In February of this year, The New York Times published an article that used data compiled by the Montgomery-based Equal Justice Initiative to visualize the number of lynchings that occurred in the South. The EJI Lynchings in America report found that more people (245) were lynched in Phillips County, Arkansas, than any other place in the nation  --  a shocking number compared to other locations that recorded 54 lynchings at most.

In all, 77 black citizens -- and no whites -- were tried and sentenced for their alleged role in the riot. Twelve men sentenced to death received legal assistance and were eventually released from prison.

A history board in town tells the story of Elaine, including the events of 1919, but Kienzle said there has never been public acknowledgment that the riot occurred. It's another thing she hopes to change.

"When we started this birdhouse project, we were not thinking about the historical part, but we wondered if in 2019, there would be some national attention," she said. "So one of our goals is that, if there is national attention, we need to acknowledge the awful things that happened here. But that none of us had anything to do with that. . . If the city doesn't do anything, we will at least have our own acknowledgment that simply says: 'Regrets for the past. Hope for the future. 1919-2019.'" 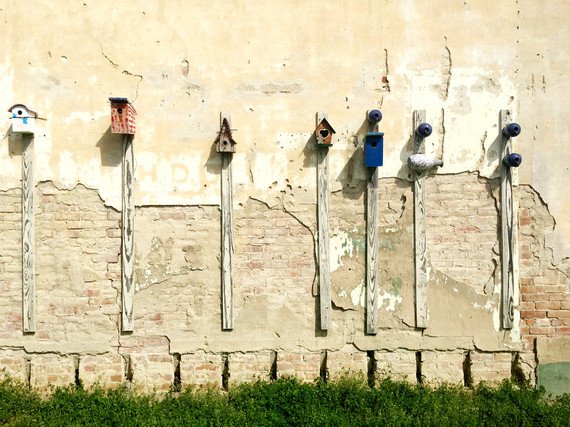 Kienzle believes America must find a new way to minister to poverty. One of her goals is to transform Elaine into a town that's known for more than poverty and systemic racism. The community center has a role. A few years ago, after seeing a flock of birds outside the center, Kienzle introduced the idea of crafting and painting birdhouses to children at the center.

She has purchased many birdhouses with her own money that are everywhere inside the center. Some are shaped like frogs, flamingos, dogs, covered wagons, motorcycles, outhouses, log cabins, purses, and other images of Americana.

A sign on the front door reads: "Birdhouses for a brighter future." Kienzle saves them all hoping Elaine will someday become the "birdhouse capital of the world."

Historic boards in a parking area outside of Elaine tell the town's history. One board features a photo of the Arkansas governor standing in front of the Elaine Mercantile Co. addressing a crowd after the Elaine massacre, and it reads that 1919 was known as the Red Summer because of a series of race riots in 30 states.

The historic board differs from a colorful modern mural on a brick building near Elaine's entrance.

The mural's final scene features farmland and a group of little girls -- both black and white -- playing beside an old gas station in front of a barn with the Elaine water tower in the background. 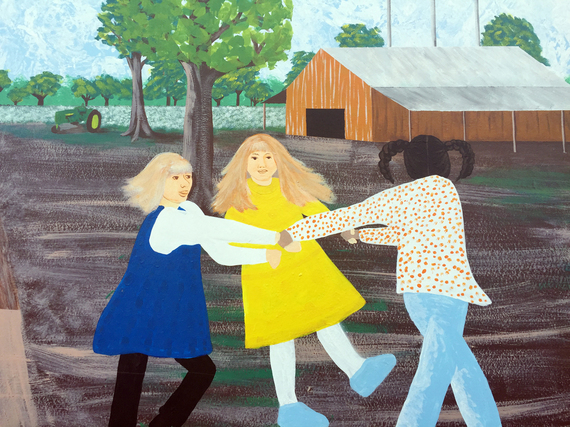