If every cell in my body had a face, it would resemble that of Edvard Munch's "The Scream", with each of the mouths getting wider and wider until November 4th is over with. 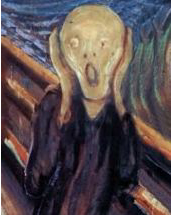 As an artist, I have, like the rest of my species, huge antennas and right now I find it simply impossible to make or write or think about art and not think about the election.

Watching history being made in every regard is to see reality afresh; when a few elements are tweaked, whether the first African American or the first woman vice president. Although let's be real about the latter--McCain's injection of Sarah Palin into his campaign was less history and more like an over-dosing Uma Thurman getting a shot directly in the heart a la "Pulp Fiction". I attribute the genuine history making moments to Obama and Clinton. And thanks to them I do not think as a country that we will ever see four white guys lined up on those debate stages again. 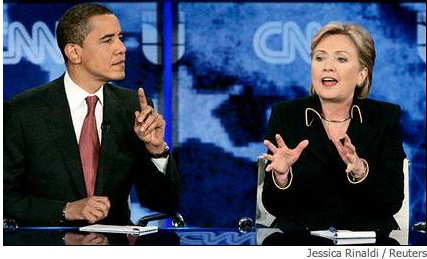 This is not to say that we've reached the very end of white-male dominated patriarchy and that we can now all hold hands in a circle under the moonlight and embrace our inner pagan witch/goddesses just yet. But it does signify an historic reality tweak, and hopefully, one that will lead us to some new post gender, post racial, post carbon age that transcends anything we've known before.

I recently interviewed two artists, Shay Kun and Larissa Bates, who made me think of the election. (Everything makes me think of the election). Shay Kun's show "Nails and Features" is currently at the Buia Gallery in New York and Larissa Bates' just had a much acclaimed show at the Monya Rowe Gallery, also in New York. Both artists have masterfully taken familiar and tweaked it in such a way that we see it anew. 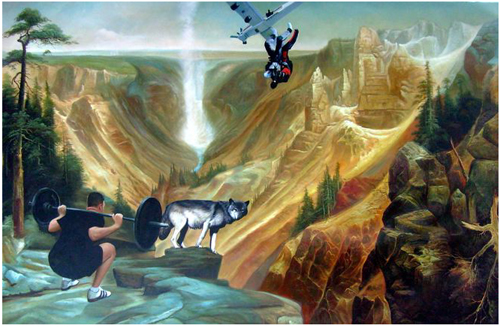 Drawing on landscape backgrounds inspired by the artists of the Hudson River School (the great mid-19th century American art movement that redefined Romantic landscape paintings of nature and westward expansion), painter Shay Kun projects viewers into an unstable and unfixed natural surrounding. Here Kun tossles and jars the untouched environments that painters such as Thomas Cole and Frederic Church perfected by adding disjointing products of conspicuous consumption and human activity into the pristine landscape paintings. 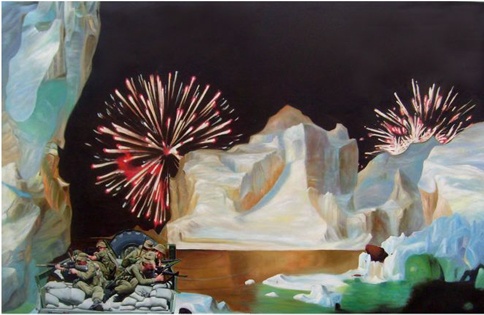 The result is refreshingly disturbing. We question human impact on nature in terms of degradation--not just of mining our natural resources, but of the footprint we leave as environmental tourists and adventure seekers in national parks. As fireworks explode and army soldiers stake out a dugout amidst the glaciers in "Premonitions," the premonition Kun leaves us recalls our wars in Iraq and Afganistan and the celebration to its end that we have not yet obtained. Glaciers serve as a stand-in for human impact on the earth, and the soldiers create a dramatic juxtaposition that pits humans against nature.

Kimberly Brooks: Tell us about "Nails and Feathers", we can start with the title. Shay Kun: These works are an infusion, a hybrid of absurdities. Drawing on the style and subject matter of the Hudson River School, particularly Thomas Cole's reverent paeans to nature and Albert Bierstadt's awestruck visions of the sublime in the American West, these works captures the grandeur of nature. Despite acquiring a newly cultured look, these landscapes that were made with all the sincerity and attention, are transformed into a juxtaposition of nature and its human invaders, who appear in the guise of tourists or adventure seekers. The contrast between these contemporary characters and their stylized environment is abrupt and, despite their small scale, they're an almost offensively inadequate substitute for the deities or characters of noble bearing that filled their place in painting of the past centuries. 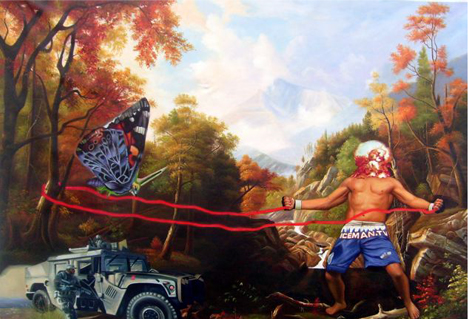 Shay Kun, "Nails & Feathers", 96x72 inches, acrylic and Oil Paint on canvas 2008, Courtesy of the artist and the BUIA gallery, New York. Kimberly Brooks: What experience led you to create this body work?

Shay Kun: I remember myself in my childhood seating down at my moms' studio -- a commercial landscape artist, asking myself if these welcoming 'greeting card' paintings are in my genes...at that time I could only produce a pastiche of Freudian Van Gogh type of work and this affliction of sublime testimony seemed too simple and sincere to justify. In retrospect I know today that both of my parents work shaped my style, those untouchable materials in my youth and through my education became the only motive that put a chock hold on me and did not let go. My exploration is not a tongue in cheek one, a one liner of an Israeli artist flipping the European/ American sublime but an emotional exploration of the point of departure and how I can add to that my own small voice liquefying this 'unfinished symphony'.

Kimberly: Your metaphor is beautiful and believe me, were you flipping off the American/European sublime you unfortunately wouldn't be alone.

In Larissa Bates', "Hustle and Bustle", she sets hyper-masculinized wrestlers or cupids in lederhosen and other unusual elements in romantic landscapes in a series of gouaches reminiscent of Persian Miniatures of the 15th and 16th Century. The extreme macho within a feminized nature cannot help but remind me of the Bush Administration's attempts to exert itself and its mores onto the world.   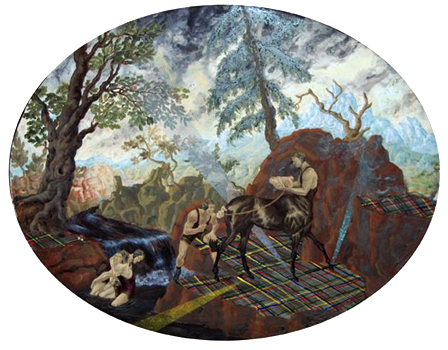 Kimberly Brooks: What were your intentions behind "Just Hustle and Muscle"? Larissa Bates: My newest body of work focuses on my continued interest in cultural constructions of masculinity. I am fascinated by the kinds of cultural pressures that are placed on men to behave within certain codes and rituals. A lot of people freak out when guys don't follow their prescribed gender role--I think the role is just as limiting and binary as traditional roles for women. For example, my husband took my last name when got married and it ruffled a lot of feathers--even in our very liberal social circles. 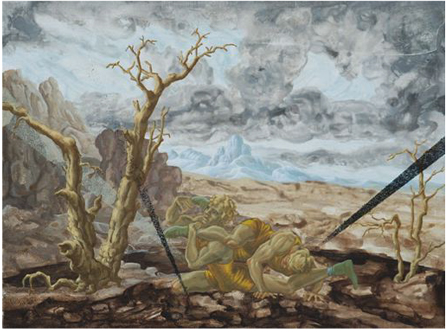 MotherMen Wrestling in Washington Allston's Desert Landscape, 2008 acryla gouache on canvas 12 by 9 inches. Courtesy Monya Rowe Gallery Larissa Bates: There are wonderful parts of our Western construction of masculinity, but the stereotyped characteristics are not necessarily a good fit for a lot of people, men included, and many of these behaviors can actually put the people who try to embody the characteristics at risk. The psychologists Williams and Best summarize these characteristics as strong, independent, tough and self-reliant--the Western influenced cowboy model. Other sociologists have studied the variations in ideas about masculinity across cultures, and found that there are great variations when comparing places like Thailand to the United States. Will Courtenay, a medical social scientist, argues that, when men (I would not limit this to men--but his study looks specifically at men) chose to socially embody these hyper masculine characteristics to increase their social status, they can result in a shorter life expectancy rate. The same behaviors that endanger men's health, like out drinking each other, having to fight when challenged, not wearing a bike helmet or seatbelt, for example, are the same behaviors that signify masculinity and connote power in our culture. The social structure is set up so that not going to the doctor is seen as "self-reliant." 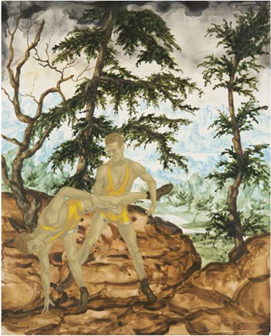 "Single Leg Take Down in Landscape after Joachim de Patinier", 2008 Acryla gouache on canvas 10 x 8 inches. Courtesy Monya Rowe Gallery On a bigger scale, I would propose it's the reason a country can't just step back and put its hands up when confronted by another; it's the Bush cowboy mentality that ends up strutting to war. There is an interesting documentary by the Media Education Foundation called, "Touch Guise" that gets into the social conditioning of boys. I watched it in college and it touched on my personal experience of being raised by a single Dad from age zero to six. My Dad struggled to both embody this cowboy idea of masculinity while having to play variations of maternal and paternal roles in my life. He did this in a culture that offered him a gender script for masculinity that was highly inflexible. Continuing to think of gender as a binary role system limits the authenticity of people--from living in a way that is true to them. My work reflects my deep desire to see a more dynamic and flexible gender world--one that is more varied, complex, and fluid. I think we have to address the rigidity in the roles that continue to be prescribed for men. I should mention that this mainstream rigidity seems to be more of an American phenomenon, because at my show in Denmark last spring, a male critic was offended that this would even be an issue. Kimberly Brooks: Indeed, America has a lot to learn in this regard but I think (fingers crossed) we're headed in the right direction.

-- First Person Artist is an column by artist Kimberly Brooks in which she provides commentary on the creative process and showcases artists' work from around the world.