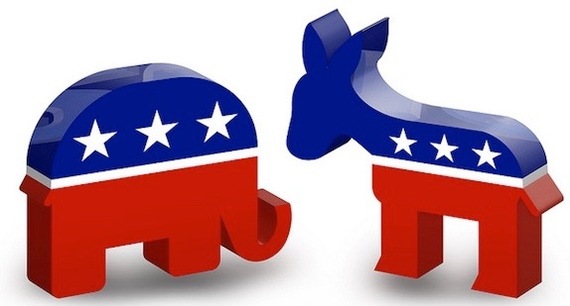 You are sitting at the restaurant. You remember the importance of eye contact. You are on a first date and want to make a strong impression. Suddenly, you cannot help but stare into her blue eyes. They are remarkable. So too is the bright, long red ties the waitstaff are wearing.

Between her blue eyes and these red ties, you find yourself stuck deep in thought. Blue and red. Red and blue. For years, you have avoided political discussions in the workplace. You have hid your views from clients, patients or coworkers. Yet, somewhere between her blue eyes and the long red tie of the waitress reciting the evening specials, how can you avoid discussing this presidential election?

If it were taboo in the past to discuss politics on a first date, what about now? Is there something wrong with you if you have no opinion about Donald Trump or Hillary Clinton? These are polarizing times--the elections of past years were perhaps less about the dramatic and more about where you stood politically. This election, so my clients tell me, is an organic conversation, even on the first date, even as an ice breaker.

So perhaps we should throw old taboos out the window. 'How 'bout them Yankees' could easily be replaced with 'how 'bout this election?'

You may be shocked by what you hear from the woman with the blue eyes. She's an avid Trump supporter and you are not. She has a distrust of Hillary, carries the second amendment in her wallet, and wants America great again. Whatever she says, I think it has to be said. To avoid conversation about this election is akin to avoiding the electricity you feel when staring deep into her eyes.

One presidential campaign has never consumed the public quite like this one--at least in the age of the internet, social media and the sound bite. To ignore it and any discussion of it would seem impossible.

So knowing now that it is near impossible to avoid discussing this election, what are the ground rules? What type of opinion do we give on a first date that will allow you to stare yet again into those deep blue eyes?

Maybe instead of avoiding the topic on a first date, perhaps your unique perspective on the campaign will be viewed as it should be -- that you are worldly, that you have an opinion, or, in the case of this campaign, you have a pulse.

Too often clients tell me they learn too little about the person on the first date. Maybe that draws people to want a second date. However, I have found the opposite to be true when it comes to this election.

Just as unheralded and surprising as this campaign season has been, I have learned my clients find it almost distasteful, removed, and provincial of a date not to have some opinion on the election.

Am I encouraging clients to pledge allegiance to the red or the blue? No. However, maybe it's important to have a healthy, measured discussion about the election so you can stare at those blue eyes again on a second date.

More:
RelationshipsGPS For The SoulmatchmakingPoliticsLove and Relationships
Newsletter Sign Up
An essential daily guide to achieving the good life
Subscribe to our lifestyle email.
Successfully Subscribed!
Realness delivered to your inbox

Founder of Wise Matchmaking (wisematchmaking.com). Brooke is a professional matchmaker in the modern dating world, wife, mother and Wharton graduate.