Bouba Ndjida National Park in Cameroon is the site of one of the most brutal elephant massacres in recent years. In roughly three months time, 650 elephants were slaughtered by poachers. The first and only NGO to enter the park during the killing spree was the International Fund for Animal Welfare (IFAW). Céline Sissler-Bienvenu, France and Francophone Africa's Director for IFAW, led the mission. I talked with Sissler-Bienvenu at the anniversary of the massacre, to discuss some of the final understandings of what happened in Bouba Ndjida National Park -- including the possibility that poachers may have "practiced" their killing on elephant calves -- and if the poachers might soon return.

We are now at the one-year anniversary of the slaughter of elephants in Cameroon.

When was the beginning of the massacre?

It began at the beginning of January 2012.

When do you suspect the poaching stopped?

At beginning of April 2012. The Cameroon soldiers [which were ultimately deployed to the park by the government] were on site at Bouba Ndjida until the end of April. So, we assume the poachers left in mid-April at the latest.

How many poachers were complicit in the slaughter?

The estimate is based on what local communities have told us. It was roughly between 50 and one hundred poachers. But they were pulling off into smaller groups of five or ten poachers.

Please tell me about the first clue you had that there was impending crisis in the park?

The first information came in early January 2012; the news then was that poachers were headed to Cameroon. But also, we had heard rumors at the end of December that they were in Chad.
At the time, I was in Congo. By February, my contact on the ground in Bouba Ndjida said that he was hearing many shotguns and that elephants were being slaughtered [he ultimately counted 200 carcasses at that time]. He also said he had contacted the authorities to let them know what was happening but there was no reaction by the authorities. That's why he contacted me; he asked me if IFAW could do something.

These poachers were all on horseback.

It has been widely reported that the Janjaweed did this -- but in fact, you believe it was a different group?

It is Sudanese and Chadian poachers who slaughtered those elephants. Their clothes and Arab language were part of the evidence. Many assumed it was the Janjaweed who did the poaching as in the previous years, but the tribal clan of Rizeigat, an affiliated group to the Janjaweed, is actually more likely to have been the poachers.

What kinds of weapons were used to kill the elephants?

Military grade weapons such as AK47s. Also they had had Rocket Propelled Grenades (RPG) and a lot of ammunition. Bags of ammunition.

What was the final number of elephants dead?

We didn't total the number by ourselves, but by talking with local communities that were in contact with poachers, it appeared the poachers were conducting a kind of census on the number of elephants they had killed. By mid March, the number was 650. 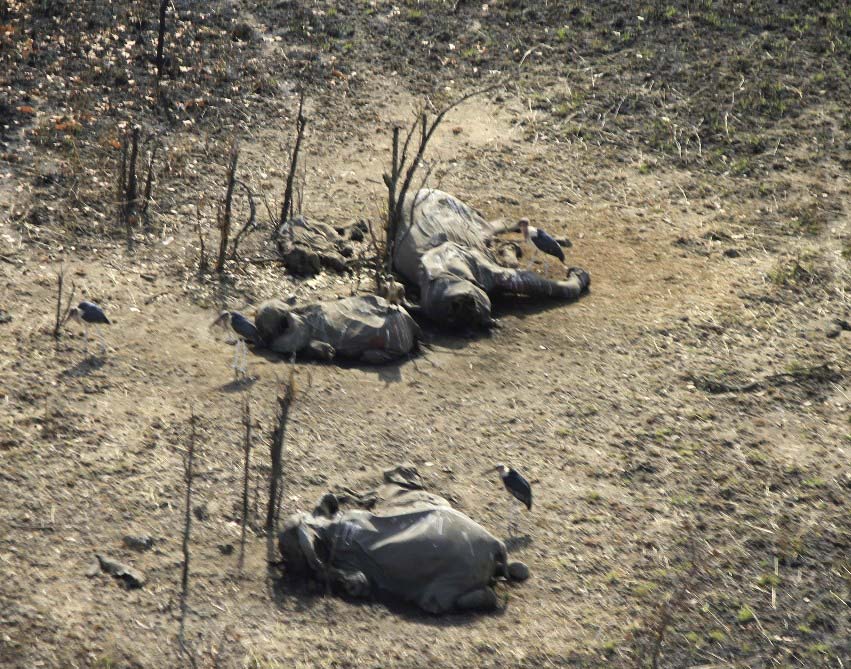 To be sure, the poachers were absolutely indiscriminate?

Yes. They killed all the members of the herd. They were following herds and killing all of them. Including the babies.

One thing you found as you surveyed the elephant slaughter, was that parts of their ears were cut off?

Yes. We noticed that on each of the elephants, except for the calves, they had a part of their ears cut in a circle form. We were informed this was a habit of the Sudanese mainly. That it was not a Cameroonian habit. It is like a trophy that the poachers wanted to get for them for each elephant killed.

According to IFAW, many -- if not most -- of the elephants were alive when their tusks were hacked off?

Yes. And they were also using some kind of dagger because we saw some lacerations where the vital organs were. We think they were often finishing off the animal with a knife or dagger. We also noticed that those kinds of lacerations were on some calves, which was surprising. We think, in fact, it was a kind of training -- a way for a poacher to be trained on killing elephants. Or we also think it may have been a tactic: To torture the younger elephants to get the adults to come around. So they can kill them all.

Had you seen anything as brutal as this?

No. Not at that scale. Because the poaching has really changed. The face of poaching has changed because before it was more subsistence poaching -- except in the '80s. But it was not to feed the Asian market and not done that way. So now we clearly see a very organized way of poaching and it comes with a very strong determination. It is very, very well organized -- and it does not give a chance to the animals to survive.

What was the Cameroon's government's response to IFAW's factual expedition into Bouba Ndjida?

To be honest, the government was not really happy that we informed the media globally of what was happening in Bouba Ndjida and that we went on site to document this slaughter and their late reaction.

Did the Cameroon government ever arrest anyone for the poaching?

No. No one has been arrested. Beyond that, I question myself every day to know where is that ivory?

Can you clarify one point: Do poachers enter Bouba Ndjida every year?
Not in particular, but every year in the dry season poachers would follow the Sudanese Axe - a "trail" that goes from Sudan to North Central Africa Republic (CAR), South Chad and to now Cameroon to kill the elephants. And those gangs of poachers are the ones who killed the elephants in Zakouma National Park in Chad in the early 2000s. But now Zakouma is more secure and Chad has taken the lead in central Africa to protect elephants, In fact, it is probably why the poachers decided to head to Cameroon. And we know that today there is a rumor that poachers are around again - they came back around in November (2012). They were in CAR in January -maybe a group of 150 or 200 - and they were heading to Chad. And now also from Chad there are rumors they are in Cameroon -- and back to Bouba Ndjida. But this year, the park has hundreds of soldiers on the ground, so we hope this will deter poachers from entering and killing the elephants.

But the other problem is most of the elephants who lived in Bouba Ndjida have left the park because of the poaching pressure. They went to Chad in an area where it is not protected. We hope the poachers won't find them.

This interview was originally published in Mongabay. You can read the full interview and see more photographs by clicking here.