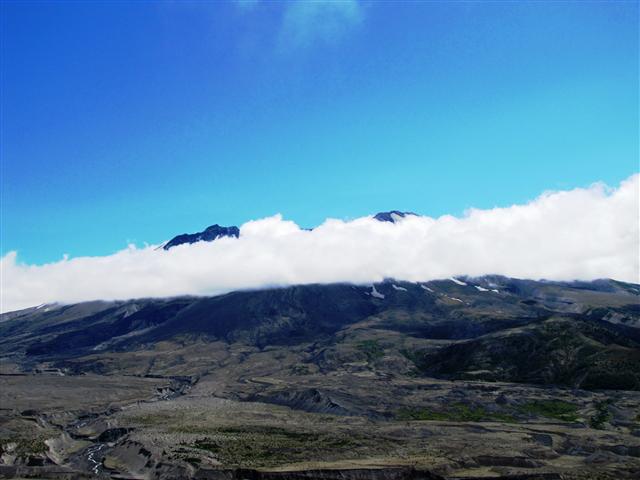 One of the first lessons learned in travel is that things don't always happen the way that you plan.

Planes are missed. Or pictures are lost. Or a bank of clouds plants itself in front of the volcano that you drove several hours to see and refuses. To. Move.

A 25-minute IMAX documentary currently playing at Seattle's Pacific Science Center served as a good primer on the history of the May 18, 1980 eruption and the effect that it had on the Pacific Northwest.

Thirty years ago, I was a pre-teen in suburban Minneapolis and while I remember seeing the eruption news on TV, it didn't hit home as much from that Midwestern vantage point. The ash clouds that settled over Yakima and other areas in Oregon and Washington looked truly epic and 57 people died from the blast.

Before the eruption, snow-capped Mount St. Helens had been one of the prettiest mountains in the Cascades, earning comparisons to Mt. Fuji in Japan. It turns out that scientists in the area knew that something fishy was going on the mountain, notoriously more volatile than others in the Pacific Northwest, for several months before the volcano erupted.

A 5.1 earthquake had taken place in March 1980, and pressure underneath the surface had caused a bulge to form, pushing the mountain out by several feet each night. A second earthquake eventually knocked the bulge off the mountain, triggering the lava and steam explosion.

The scope of what happened became clear as I drove toward Johnston Observatory, named for vulcanologist David Johnston of the U.S. Geological Survey who died in the blast. Johnston's famous last words, heard crackling over the radio, were "Vancouver! Vancouver! This is it!," making him the first one to report the eruption. 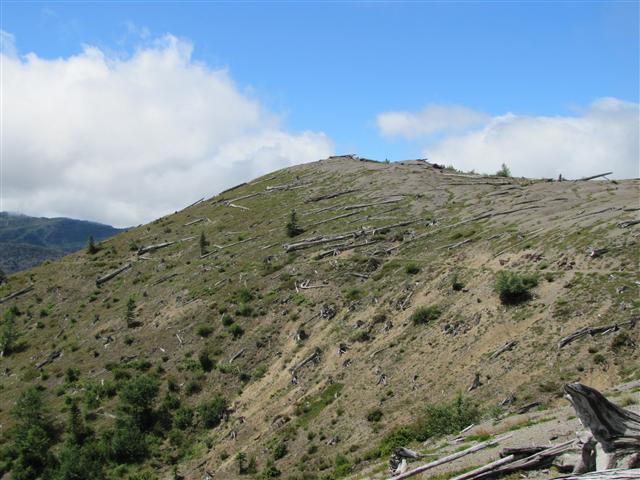 As you get closer to the mountain, the landscape becomes more barren; the U.S. government has chosen not to replant the areas damaged by volcano, instead using them as a research area for natural regrowth.

I pulled over at Loowit Lookout ,which offers great views of the mountain - at least on a sunny day. I could see the top and bottom peeking out from the cloud, but not much else. 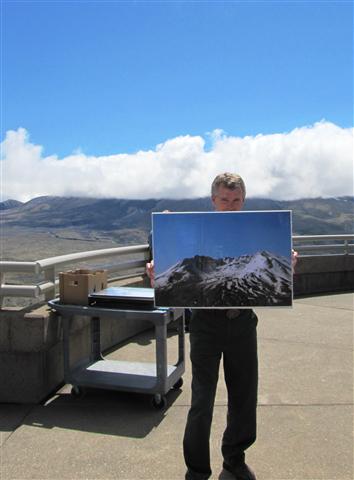 I arrived at Johnston Observatory just in time to hear a ranger talk about the geological forces that led to the 1980 eruption. Realizing that we were all frustrated by the cloud obscuring the crater and lava dome, Todd showed us a picture of what we'd be seeing if the weather cleared up.

And when might that be, I asked. Todd thought for a moment: "Usually it's clear now," he said. "But it is getting toward fall. July is a better bet."

(Fall! Let the record show that I visited Mount St. Helens over the second week of August. Thus are the peculiarities of the Pacific Northwest summer).

I had to force myself to remember that traveling is unpredictable, particularly in the Northwest where even the alleged sunny summer doesn't always live up to its billing. All you can do is embrace the adventure for what it is, and hope for better luck next time.