Let's face it. The subject of taxes intimidates a lot of people, and it can be an understandably touchy subject. So we won't inundate you with charts, graphs, and tables to tell you why the rich are getting away with murder on tax day. We've got something better for you on this Tax Day, just 24 hours after Republicans rejected the Buffett rule (a proposal which was sensible, if far too easy on the rich).

Instead of bogging you down with data, we offer you: The Elvis Index.

As we've noted before, Elvis had a manager named Col. Tom Parker -- who, in the true huckster/promoter spirit, was neither a "Colonel" nor "Tom Parker." (He was a Dutch immigrant.) Col. Parker famously said back in the 1950s that "I consider it my patriotic duty to keep Elvis up in the 90 percent tax bracket."

That's right. Back in the 1950s -- when we were that country that Rick Perry and other conservatives wax nostalgic about -- Dwight Eisenhower was President, the nation was enjoying its postwar economic boom, and the top tax rate for ultra-high-earners was 90 percent. (It was either 91 percent or 92 percent throughout the Eisenhower Presidency.)

Today the official top tax rate for ultra-high earners is 35 percent -- and between capital gains tax cuts and other accounting tricks, very few of them pay even that much. Here's a snapshot:

What has this succession of tax breaks for the wealthy done for -- or to -- the rest of us? Let's consult the Elvis Index: 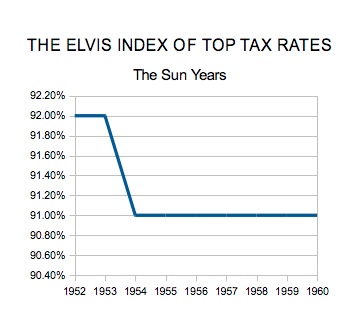 Elvis Presley's rise to stardom took place during the Eisenhower Presidency. These were the years when he went from the kid who cut an acetate of "That's Where Your Heartaches Begin" at a county fair for his Mom, to the 19-year-old truck driver who changed pop music in Sam Phillips' Sun Records studio in Memphis, and on to the RCA Records superstar who stunned the world as he sang the songs of Otis Blackwell and Lieber & Stoller.

With a top tax rate of 92 and 91 percent, President Eisenhower was able to build the national highway system -- which, like other parts of our infrastructure, is now crumbling into decay. 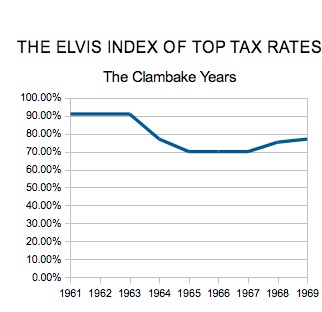 A patriotic and optimistic nation of fans stood with Elvis during his years in the Army. But as the tax rate gradually dropped into the 70 percent range, Elvis went into a decline too. Under Col. Parker's direction he did all those out-of-touch movies (Remember "Do the Clam" from Clambake?) even as the British Invasion led to the USA's first musical deficit.

But with a top marginal tax rate still in the '70s, Presidents Kennedy and Johnson were still able to rack up an impressive list of accomplishments: Creating Medicare. Initiating our first widespread antipoverty programs in a generation. Manned space flight. And all that with a war going on...

These years ended on an up note for everyone: Astronauts walked on the moon, and Elvis had that awesome comeback special on TV. 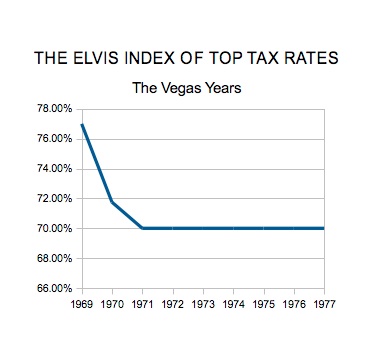 Then came Dick Nixon -- and the years when Elvis turned into a bloated self-parody in the greed-driven neon hellscape of Los Angeles. As the war dragged on, Elvis did karate moves onstage in a cape. And after Nixon's resignation and the start of runaway inflation, Elvis died tragically and farcically. The Reagan Presidency was foreshadowed by the hit that followed his death, a turgid tribute from an Elvis impersonator called "The King is Gone." 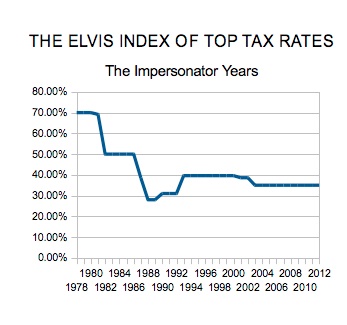 You know the rest: The Elvis Impersonators took over Las Vegas, and the impersonators of leaders past took control of the nation's capital. They were able to disguise the devastating impact of their tax cuts on the Federal budget for years, thanks to one economic bubble after another. But the bill finally came due and their house of cards came crashing down in 2008.

Today social mobility is at an all-time low in this country. There won't be many more Elvises rising to wealth from the dirt-packed streets of Tupelo Mississippi. The top 1 percent in this country own 42 percent of its wealth, while the top 5 percent own 70 percent of it. 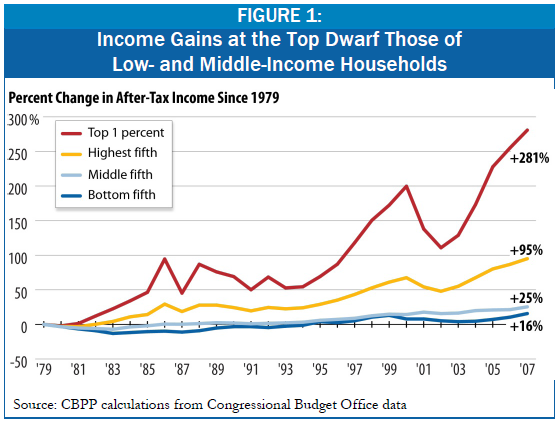 The inequity in our national wealth is worse than Iran's, or India's, or China's,or most other countries you can name. We're still better than Zimbabwe and Nigeria, though. In your face, Zimbabwe!

Too many of our leaders in Washington want to tell us that the only solution is for us to accept less and less -- less infrastructure, less education, less financial security -- while the rich continue to enjoy these low rates or even lower ones yet to come.

They need to pay their fair share -- and then say "thankuverymuch" to the nation that made their success possible.

Richard (RJ) Eskow, a consultant and writer (and former insurance/finance executive), is a Senior Fellow with the Campaign for America's Future and the host of The Breakdown, broadcast Saturdays nights from 7-9 pm on WeAct Radio, AM 1480 in Washington DC.