The Emergence of a Digital Democracy.

AT 12:01pm EST on January 20th, there was a change in the way the US Government thinks about the digital world that may have gotten lost in all the pomp and circumstance.

Whitehouse.gov, a formerly moribund, flat website was retired. In its place, Change.gov was re-named Whitehouse.gov. Today - Whitehouse.gov is a glimpse into just how the Obama Administration views the digital world. And while there hasn't been a lot of press releases or noise - take a look because it's significant for anyone in digital media, publishing, advertising or tech.

First, the Obama Administration doesn't look at tech as a 'gimmick' or a side-show, but rather central to the way they envison organizations (government or not) to function and flourish.

You can see the spirit and thinking of Google, Facebook, Twitter, Photobucket, and more of the groundbreaking Web 2.0 technology companies replacing one-way walls and faceless bureaucracy with interactive solutions, community-based knowledge, and self-help and shared-help resources. Simply put - Web in the 2.0 world is about shared knowledge, fast moving data, and pop-up communities that can self-organize and self-govern.

One year ago - Scott Heiferman, the founder of Meetup.com was presenting his view of grassroots community activism at TED in Monterey. While some of us remember MeetUp in its early days as political organizing tool, Meetup has grown into something best described as post-political. Essentially, Meetup provides a platform for people anywhere to set up a meeting, and organize others with similar interests. Chess Players, Working Mothers, Computer Geeks and Book Clubs all use the Meetup platform to gather, share, and accomplish things that can only be done in groups.

Meetup isn't the only software solution doing this - in fact - it's happening more places than you might notice. The change, from centralized organization (government) to distributed organization is fast moving and significant. Etsy makes it possible for crafts people to use the web to sell far and wide, turning cottage industries into nodes of creativity and crafts that are viable businesses.

Despite the various attempts at creating the phenomenon known as citizen journalism, Facebook has quietly created unique communities of information that are quirky, personal, and certainly newsworthy to those that subscribe to them. What seems so clear to those of us who've been deep in the trenches of the digital age is that CHANGE is what a broadband-enabled world is all about. It pushing power away from the center and to the edges of the network. It puts the tools of production in the hands of everyday folks. And it connects us in surprising asymmetrical ways that lead to wonderful human interactions.

While it's temping to call this change 'high tech' - it is strangely low-tech. For example, Twitter is a paradigm shifting micro-blogging platform that is less than two years old. But it is ingenious in its simplicity. It allows anyone to post anything - and anyone to subscribe to (or unsubscribe to) any feed. The result is that micro-networks pop up at events like this weeks Inaugural in Washington, where Twitter saw a staggering 5,000 posts (known as Tweets) per second during the President's acceptance speech. That's 5,000 individuals publishing their thoughts - and some uncounted number of followers reading them in real time. If you search Twitter (summize.com) and search the 'tag' #Inaug09 you'll read a remarkable stream of comments, points of view, and observations. Some silly. Others quite poignant. Still others critical or cynical. Increasingly big events like these are seen through a lenses of thousands of individual eyes and voices. At the same time, community published pictures from places like Flickr are giving people a shared visual view of shared public events. Check out www.Inaug09.magnify.net for both videos and photos gathered from across the web.

So President Obama is right - Change is coming to America. For those of us building a bridge to the emerging digital democracy - Change has been part of our daily lives for some time. It's great to see an administration that welcomes the future, sees its promise, and promises to leverage the power of digital change to make a real difference in peoples lives. That is, after all, why we've been connecting people and ideas since the advent of the internet.

Next stop - the future, when the power and transformative nature of the web touches the daily lives of all Americans. 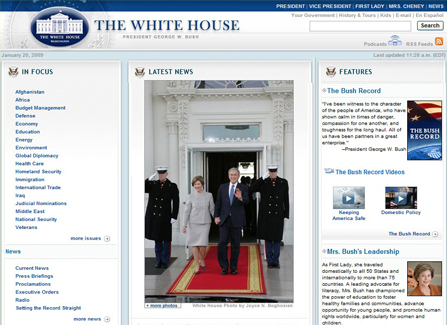 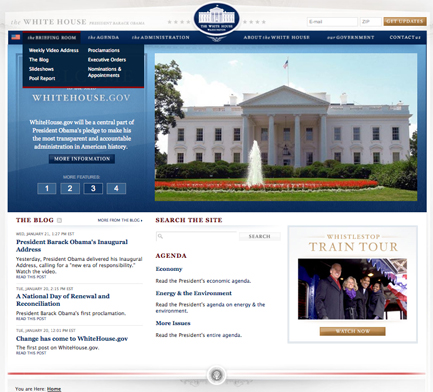