In some parts of the emerging world, housing markets have grown well ahead of income in recent years according to the IMF Global Housing Watch. As U.S. interest rates are about to rise, international capital will likely revert back to the U.S. seeking higher and safer yields. Resulting outflows from emerging market countries may very well bring about an earthquake in housing markets in emerging economies at the periphery of the global financial system.

Since the 2008-09 global financial crisis, which saw a steep and highly synchronized decline in valuations, housing markets around the world have cruised at different speeds. While in most advanced economies, housing prices contracted for a prolonged period both during and after the crisis, in emerging markets, housing prices suffered brief declines, recovered quickly and have kept rising since.

According to the IMF Global Housing Watch, home prices (and credit) in Brazil, China, and Turkey are still running well ahead of inflation, even though income growth has long slowed in these economies. In both Brazil and Turkey, in addition to high inflation, their respective current account deficits are large as a share of national income, which signals these economies are overheating and relaying on foreign borrowing to spend beyond their means. In contrast, housing prices in India and Russia have already fallen as domestic political problems have contributed to cooling their respective housing markets. 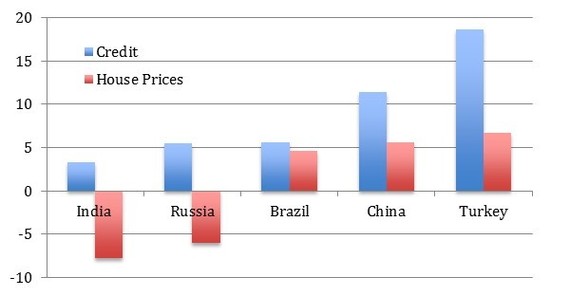 In China, struggles to sustain a high rate of GDP growth, occasional hiccups in the banking system and erratic policy responses from the People's Bank of China (PBOC) are a reminder that the ongoing transformation of the Chinese economy is challenging and far from complete. Liberalizing the Chinese financial system while rebalancing economic growth toward consumption in the presence of high debt and an overvalued housing market is difficult at best as it could potentially become a systemic threat to financial stability if the easy credit that supports demand runs out of hands. In fact, the PBOC recently freed up more than $100 billion for its banks to lend by cutting its reserve requirement for the first time in two years.

The Fed is signalling it intends to raise interest rates as early as June, doing so would adjust the federal funds target rate for the first time since December 2008 when it cut the federal funds rate to zero to fight the global financial crisis. The U.S. economy is now approaching full employment with real wages finally beginning to rise while headline inflation remains subdued thanks to falling energy prices. The S&P 500 continues to reach new all-time highs as credit growth has also picked up, which are both healthy signs of a rehabilitated economy capable of standing on its feet.

Some economists, including the St. Louis Fed's James Bullard, are worried that the Fed may be repeating the same mistakes of 2002-2004 when the Fed kept rates low for too long, according to some economists including Stanford's John B. Taylor, contributing to the build-up of credit expansion and housing market vulnerabilities that lead to the crisis.

Historically, when the Fed tightens and begins to raise interest rates, capital reverts back to the U.S. causing earthquakes at the periphery of the global financial system. For example, the ignominious Tequila crisis, which saw a substantial decline in the Mexican peso, was preceded by a sequence of U.S. interest rate increases in 1994. During the event, Mexico was caught off guard trying to protect the value of its declining peso. After an ill-conceived attempt to defend the exchange rate earlier in the year, on December 20, Mexico capitulated under a speculative attack and devalued its currency in the midst of its deepest recession since the 1982 Mexican debt crisis. The Mexican banking system went under a wave of mortgage defaults triggered by the sudden increases in interest rates and unemployment.

The Tequila crisis marked the end of a 10-year long house price boom in emerging markets comparable to the one enjoyed by advanced economies in the 2000s. Indeed, the housing market was a lesser known driver of the financial crises in emerging Asia and Eastern Europe in the late 1990s and the early 2000s. While housing markets in advanced economies have cooled down in the early 1990s, housing prices in emerging markets roared ahead until mid-1990s propelled by loose monetary conditions at the center and easy access to international credit. When they eventually crashed, it took more than 10 years for housing prices to recover.

A new Bank of England working paper shows that house prices in emerging markets are much more responsive to international financial conditions than those in advanced economies. A fall in cross-border credit of one percent of world GDP (a little bit less than 10 percent of total cross border credit outstanding) makes prices drop by less than one percent in advanced economies, but more than three percent in emerging markets. 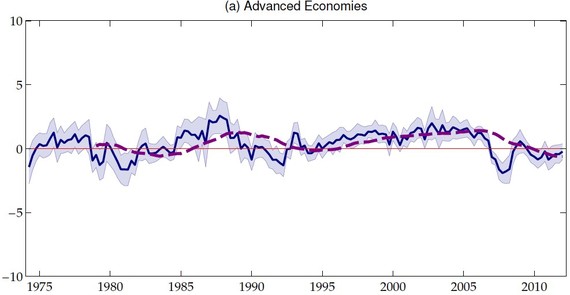 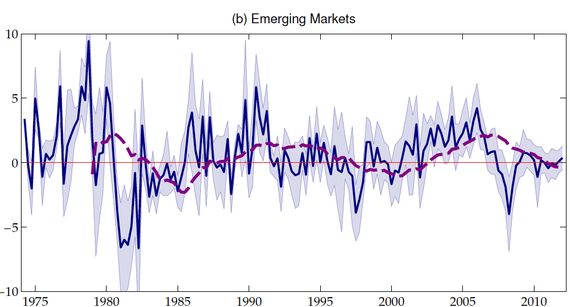 Notes: The solid lines are cross-country averages of the quarter-on-quarter growth rate of real house prices. The shaded areas represent the cross-country 25/75 interquartile range. The dashed lines are rolling 1-year moving averages.
Sources: Authors calculations based on data from Cesa-Bianchi, Cespedes, and Rebucci (2015), Bank of England Working Paper No. 522.

As a matter of economic principles, when capital flows out of an economy, housing prices tumble, the current account balance suddenly swings into surplus, and consumption has to adjust dramatically. Loosening domestic monetary conditions and a depreciating exchange rate can help cushion the blow as several emerging market central banks have accordingly moved preemptively. If borrowing is in foreign currency, however, there is only so much that can be done other than a painful financial dislocation like in the case of Mexico in 1994.

With a limited scope for trying to rescue an economy after a crash, the best course of policy action is to try to engineer an orderly housing correction before it is too late. Tightening the regulatory parameters of the financial system in a precautionary manner -- so-called macro-prudential policies -- is one approach. This would not only cool off housing and credit markets, but would also put them on more solid footing to face the financial earthquake that is about to come.