What has been the takeaway from the abundance of Sarah Palin coverage over the past few weeks? This week's New Yorker boils it down. See below:

GIBSON: What insight into Russian actions, particularly in the last couple of weeks, does the proximity of the state give you?

PALIN: They're our next door neighbors and you can actually see Russia from land here in Alaska, from an island in Alaska.

COURIC: You've cited Alaska's proximity to Russia as part of your foreign policy experience. What did you mean by that?

PALIN: That Alaska has a very narrow maritime border between a foreign country, Russia, and on our other side, the land-- boundary that we have with-- Canada. It-- it's funny that a comment like that was-- kind of made to-- cari-- I don't know, you know? Reporters--

COURIC: Explain to me why that enhances your foreign policy credentials.

PALIN: Well, it certainly does because our-- our next door neighbors are foreign countries. They're in the state that I am the executive of. And there in Russia--

COURIC: Have you ever been involved with any negotiations, for example, with the Russians?

PALIN: We have trade missions back and forth. We-- we do-- it's very important when you consider even national security issues with Russia as Putin rears his head and comes into the air space of the United States of America, where-- where do they go? It's Alaska. It's just right over the border. It is-- from Alaska that we send those out to make sure that an eye is being kept on this very powerful nation, Russia, because they are right there. They are right next to-- to our state.

AMY POEHLER AS HILLARY CLINTON: I believe that diplomacy should be the cornerstone of any foreign policy.

TINA FEY AS PALIN: And I can see Russia from my house!

From Barry Blitt on the cover of this week's New Yorker, a distillation: 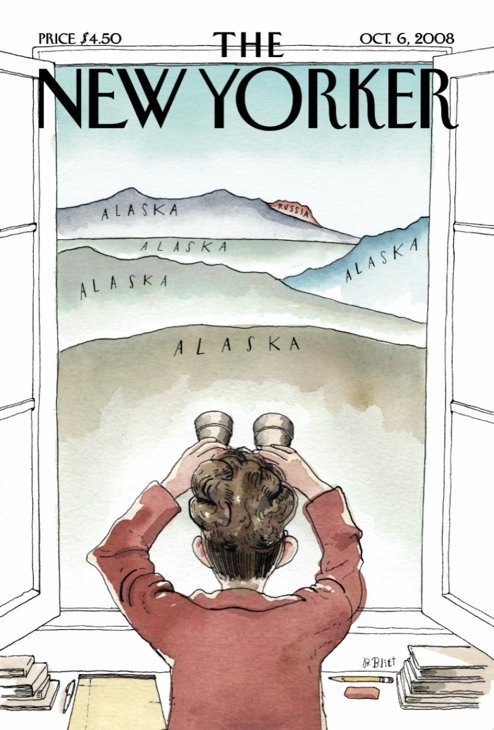 NB: This cover is done in homage to the famous Saul Steinberg view from New York.

Also NB: I'm sure this cover gave David Remnick an extra savage jolt of joy, because he actually really does know about Russia.

NB redux: Once again Barry Blitt taps into the zeitgeist. I'll just leave it at that.

mediaEat The Press
Go To Homepage