Last Thursday, something unusual happened in America. In a country uncomfortable with both political discussions and art which is not decorative, we heatedly discussed a statue. You know the one I'm referencing - the nude statue of presidential hopeful Donald Trump - depicting him as a pompous dictator with no clothes and no testicles and a very, very small penis. 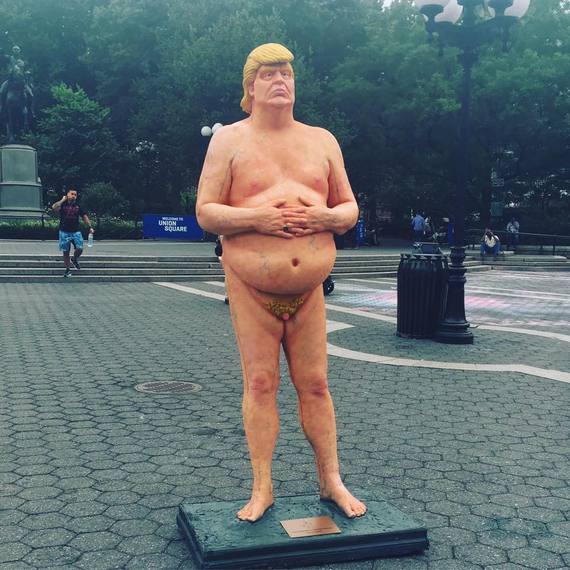 Commissioned by the anarchist art collective, INDECLINE, statues of a salmon pink Trump simultaneously were erected (its hard to find another word) in public spaces in New York City, San Francisco, Los Angeles, Cleveland, and Seattle. Named "The Emperor Has No Balls," New York City's Parks Department removed the statue. A spokesman said they removed it because the statue was unaccompanied and had been installed without a permit. A Parks employee quipped, "NYC Parks stands firmly against any unpermitted erection in city parks, no matter how small," to the delight of many. I have to admit I thought the quip was pretty funny.

Others, however, were not laughing. They said the statue was an example of body shaming.

Mark Sandlin, a Presbyterian minister and highly regarded progressive Christian blogger, acknowledges the important role that art plays in society. He believes we need to be careful about "limiting and controlling the artist's expression". Yet, he feels INDECLINE crossed the line into body shaming for its own sake. He told me,

We also need to guard against people who want to hide behind the claim of "art" when all they are really doing is belittling, bullying, or embarrassing someone. While I appreciate the "emperor's new clothes" angle of the Trump statues, I'm finding it very difficult to see them as much more than a case of body shaming, and that's never OK with me. If they had been statues of a naked Hillary [Clinton], I feel certain we would have been incensed by them.

Nothing is being said by the piece that is difficult for one in the current political climate to say - that Trump is a joke, or that fat people must be shamed, or that male bodies that don't conform to masculine notions of genitalia deserve scorn. Indeed, the real naked emperors seem to be the installation's smug audience instead, parading around in seeming robes of progressive politics, which actually, upon closer inspection, are their own naked delusions of open minded, non-oppressive grandeur.

I, too, can see how the statues may reinforce Americans' regrettable habits of body shaming and transphobia or anxieties around anyone who is not cisgender or any man who does not have testicles or or who does have a very small penis. These are problems in American culture and work to harm more people than many of us realize. It is a problem when we associate genitalia with maturity or bravery or intelligence. I agree with Sandlin and Sridhar as far as that goes.

In fact, INDECLINE told Priscilla Frank for The Huffington Post that is what they were doing -- appropriating the association of testicles with being a man in American culture and using that against Trump. But they were doing something more. "We decided to depict Trump without his balls because we refuse to acknowledge that he is a man," they said. "He is a small arrogant child and thus, has nothing in the way of testicles." 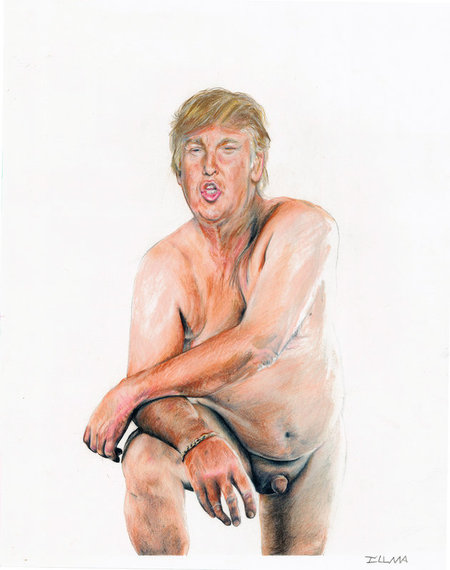 Her painting was modeled after a real life, middle aged friend. As far as I can tell, no one seemed to take exception to the slight pot belly and sagging skin of her painting. Other than commentary of the small penis, the painting is a fairly straightforward depiction of a naked man.

Yet, Make America Great Again has provoked hysterical responses. Gore has been anonymously threatened with lawsuits if she sells the painting, has been punched in the face by a Trump supporter in her own Los Angeles neighborhood, and has received thousands of death threats.

She notes that her painting has been understood and well received "everywhere apart from America". This has to raise the question, "What about this painting has triggered the anxieties of Americans in particular?"

The brouhaha over the INDECLINE statues is reminiscent of the controversy over Maurice Sendak's children's book, In The Night Kitchen, published in 1970. 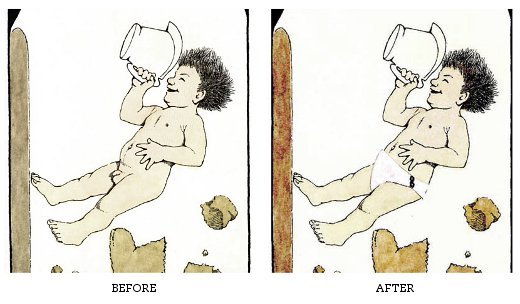 From In The Night Kitchen, by Maurice Sendak

The "before" picture here was how Sendak originally drew a 3 year old little boy who dreams, falls out of his pajamas and into the Night Kitchen where he bakes cakes. The "after" pictures show the diaper which was painted on him by librarians who fancied themselves the custodians of American morality and felt independently authorized to censor Sendak. The book remains on any list of the most analyzed, controversial, and banned books in America.

Americans have legitimate concerns about body shaming and transphobia. But Americans also are anxious about seeing penises in library books, on paintings, and on statues.

This aspect of body exaggeration is what other commentators about the INDECLINE statues were interested in. They were not worried about body shaming or transphobia. They saw the exaggeratedly small penises as essential to legitimate commentary about this particular politician.

Journalist David Person is on the board of contributors for USA Today. INDECLINE is suggesting, he says, "that despite Trump's bravado and bluster, he essentially is the emperor who has no clothes. Worse, he lacks the strength to provide true leadership. That is what the emasculated statue is about. They also seem to be suggesting that Trump's allegiance is not to this nation but that he has a secret agenda -- hence the Masonic ring on his finger."

Los Angeles area filmmaker and artist Robin Rosenthal places the statue "in a long tradition among artists, notably Spain's Francisco de Goya, of political cartoons." INDECLINE's statue is "pure political commentary," insists Rosenthal. "It's a political cartoon in the form of a sculpture. If it is body shaming, artists and cartoonists have license to body shame."

Goya's cartoons were hard hitting political commentaries. His Los Caprichos [Whims] published in 1799 and his Los Desastres de la guerra [The Disasters of War] produced in the 1810s are sharp observations of his era. Goya skewered groups of people, such as the Catholic clergy, he believed to be largely responsible for many of the ills of Spanish society. A precursor to today's political cartoonists, Goya excelled in an informal style, exaggerations, and pointed attacks on contemporary prejudices and superstitions. It also is worth noting that he withdrew his Caprichos in 1803, after having sold only 27 copies of the set. His reason: concerns about the repressions of the Spanish Inquisition. 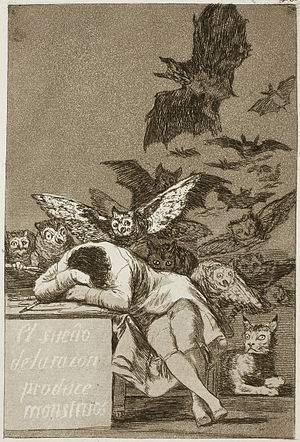 "The Sleep of Reason Produces Monsters," from Los Caprichos, by Goya, 1799 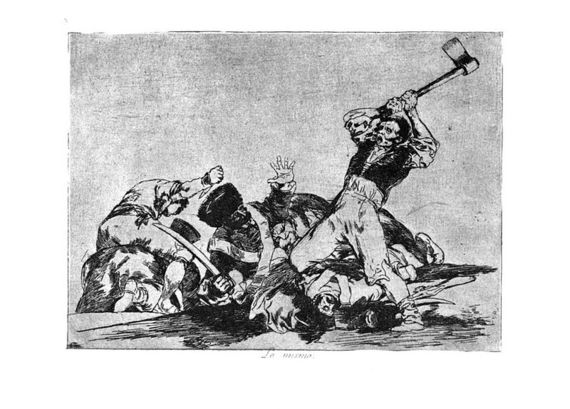 If I were Trump and someone painted me with an exaggeratedly small penis for political reasons, I'd be offended. No doubt about that. 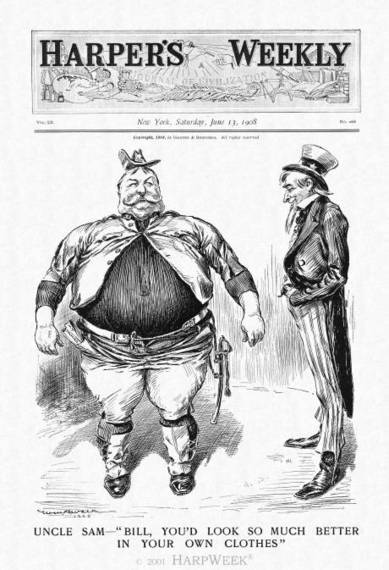 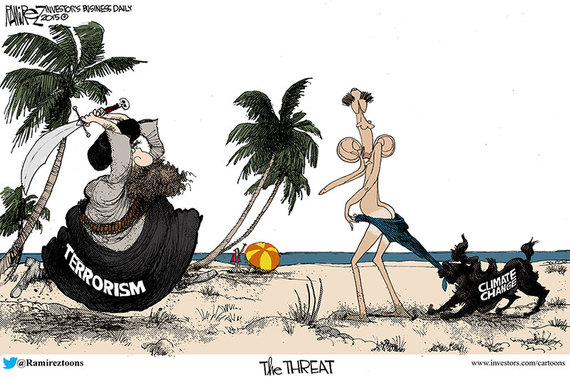 Lincoln as long and thin as a string bean. William Howard Taft, said to have weighed in at 300 pounds, busting out of his impossibly ill-fitting clothes, that tiny hat tottering on his head. Barack Obama with his inevitable big ears and, in this cartoon by Michael Ramirez, exposed bottom.

Body shaming? Sure it is. Is it intentional? Without doubt.

I'm under no illusion, however, that with these political cartoons of American presidents, I am looking at anywhere near accurate representations of their bodies. Obama is an extraordinarily good looking man whose ears do not proceed from his shoulders. Of that I am certain.

And with INDECLINE's Trump statue, it does not occur to me that I am looking at an actual representation of Trump's body. He is not, after all, salmon pink, nor is he fat. I assume he is not old enough to have the varicose veins given to him (although I could be wrong). I assume he has testicles. I have no way of knowing the size of his penis. Nor do I care to.

What I do care about is Trump's relationship to every petty demagogue who ever lived with their swagger and self importance and their erecting of expensive, grotesque statues of themselves in public squares. I care about Trump's misogyny. I care about how he reflects and has tapped into a disturbing aspect of American culture -- that horrid delight in making fun of anybody who is vulnerable, different from us, or presents any sort of real or imagined existential threat. And, yes, I get that is what the INDECLINE artists were doing -- delighting in giving Trump a taste of his own medicine. That, too, disturbs me. But only a little bit.

Mostly, I think, "Well done, INDECLINE!" With your guerrilla tactics and guerrilla art, you provoked a conversation among us about politics, art, and about our own culture. And for that, I thank you.

Ellin Jimmerson's Ph. D. is in 20th century US cultural and intellectual history.