Once upon a time, in a country wide and beautiful, there was a very audacious and flamboyant financier who liked to wear very nice clothes. (Here he is in his gold tie and pinstripe finery.) 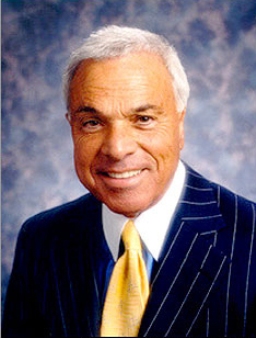 One day, this very daring man saw a need in the housing market, and lo, with a skill for salesmanship and the help of the best money lenders he could find, he concocted a scheme by which many, many, MANY people were able to purchase a home for the unheard of price of... nothing down.

At the time, the scheme came with the catchy industry title, "affordability products." With the help of many, many, MANY others, they called this brilliant scheme... "subprime lending."

Well the people of the wide and beautiful country thought this was wonderful. "Now we can have the home of our dreams without worry," shouted Jane and Joe Doe.

And lo, the man with the scheme was able to buy more and better finery. He was even able to afford his own in-home spray-tan salon which he availed himself of, frequently.

Such was the genius of this very bold man that citizens far and wide in this country would come and avail themselves of the scheme until lo, the man's company became "a mortgage lending behemoth with $11.4 billion in revenue at its peak in 2006," according to The New York Times (Oct. 16).

Over an eight year period, this very extraordinary man became an Emperor in this new land of mortgage lending, and befitting his position, was richly rewarded to the tune of "$521.5 million, according to Equilar, a compensation research firm."

One day, however, the stylishly tailored Emperor was called to Congress to answer some very serious questions about how and why this scheme came about and the great burden it now placed on ALL the people in the country wide and beautiful. (Here he is testifying before Congress in his red silk tie and suit.) 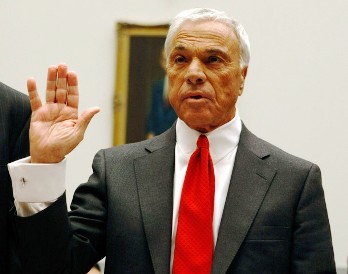 Finally, in 2009, a great and powerful overseer called The Securities and Exchange Commission sued the Emperor and his colleagues, accusing them of "hiding growing risks from investors." (This, despite the fact, that the SEC chose not to look more closely until the scheme was well underway and many, many, MANY people were affected by the bad loans.)

And what did the great and powerful SEC have in its possession as evidence of this risk hiding?

A series of e-mails written by the Emperor himself showed that even he did not have much faith in the scheme. "In all my years in the business, I have never seen a more toxic product." And, "[I have] personally observed a serious lack of compliance within our origination system as it relates to documentation in the quality of loans originated."

Well, with evidence like that, what could the Emperor do?

And so it happened that four days before the Emperor and his colleagues were to appear before a jury in a federal court, the Emperor with the help of many, many, MANY attorneys settled fraud charges for $67.5 million. It was determined that the Emperor "would pay $22.5 million in penalties and $45 million in 'disgorgement,'" of stocks returned to the company's shareholders, according to The Wall Street Journal (Oct. 16).

However, in agreeing to the settlement, the Emperor "and his colleagues neither admitted nor denied the government's charges," so we can only conclude that the Emperor offered the money as a one-time donation to promote the good work of the great and powerful overseer.

And what of the people who had subprime loans and the citizens of the country wide and beautiful who continue to carry the burden brought about by the scheme?

Well, they got screwed.

Well, he can never, ever, EVER serve on a public company again. BUT he does get to keep all his real nice clothes as well as a lifetime of security.

Jim Lichtman writes and speaks on ethics. His commentaries can be found at EthicsStupid.com.