According to the Bureau of Labor Statistics, 0.3 percent of those who lost their jobs in 2010 were let go because of "government regulations/intervention." By comparison, 25 percent were laid off because of a drop in business demand. 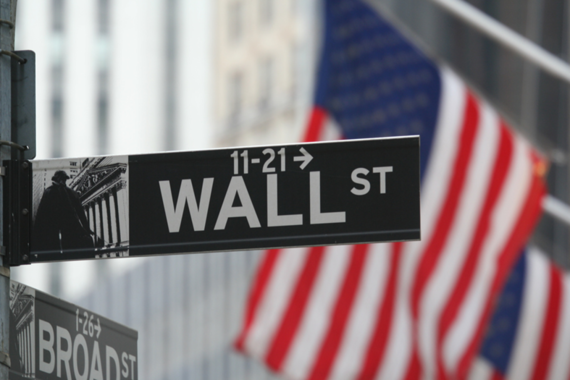 It has now been five years since the official end of the Great Recession. Unfortunately, the US labor market is far from recovery. Despite encouraging news, over 9.5 million people are still jobless and there are about 3 million long-term unemployed. There are likely millions more long-term jobless that are not being counted. Earlier this year, many of these people lost their long-term unemployment benefits. Many others were generally not eligible to collect any form of unemployment benefits (see Ghayad, 2013).

Policymakers are currently invoking two very different explanations for why firms don't want to hire the long-term unemployed. The more convincing reasoning is that the demand for goods and services is depressed because of the long-lasting effects of the financial crisis that has led to both a deleveraging of households and a cratering of the construction sector.

There is a competing story which claims that hiring has been held back by uncertainty over financial regulations that have been put in action since the end of the Great Recession. The logic behind this "uncertainty" argument is that employment growth has been sluggish because firms have been turning down profitable opportunities because they fear existing and new regulations will not allow these sales opportunities to remain as profitable in the future and they fear making the longer-term commitment of hiring permanent workers. The source of this threat, according to some people, is the Dodd-Frank Act -- the 2010 measure designed to end abusive financial services practices and to promote the financial stability of the United States by improving accountability and transparency in the financial system.

One of the main goals of the Dodd-Frank act was to keep financial institutions from becoming "too big to fail." But the question of how big is too big remains unanswered, and whether Dodd-Frank's heightened regulatory scrutiny will safeguard the financial system can only be conjectured. The U.S. largest banks have grown only bigger since the financial crisis -- by as much as a third, according to some estimates. But their business has also become less complex, which may be more important. Bank of America, Citigroup, JPMorgan Chase and Goldman Sachs, among other big firms, have all cut back their trading or shed "noncore" assets in recognition that in the post-Dodd-Frank world, simpler is better.

The bottom line is an old story: regulation has raised costs and made business opportunities to sell goods and services insufficiently profitable. The new twist is that these fears are suppressing current investments and hiring, and are thus a major cause of our long-term unemployment problem.

How credible is the "uncertainty" story?

The graph below depicts the trend in mass layoff by reason using data from the BLS that go back to 1995, when the data series starts . The top curve ("Total Initial Claimants") shows the BLS measure for the total number of workers laid off each quarter in what the BLS calls "mass layoff events," expressed as a share of total private-sector employment. For most of the period since 1995, mass layoffs were never more than 0.4 percent of total private-sector workers. At the peak of the recession in 2009, mass layoffs spiked at over 0.7 percent of private-sector workers per quarter, before falling back down closer to historical levels. What is most interesting about the graph is that the middle curve -which tracks layoffs due to declines in business demand -- is driving almost all of the overall level of mass layoffs. The thick, almost flat line at the bottom tracks the portion of mass layoffs caused by government regulation. Government regulation had essentially no impact on layoffs and therefore cannot explain any of the increase in layoffs in the last several years. 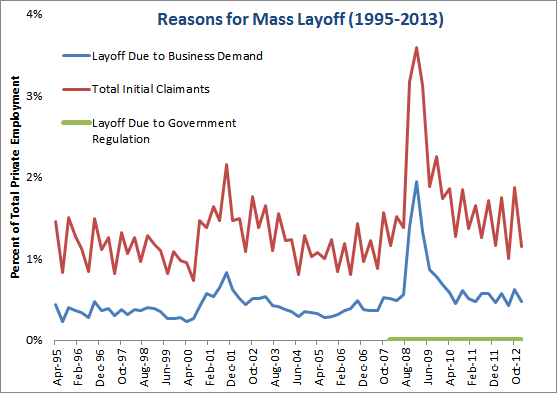 Data from the Bureau of Labor Statistics suggest that tighter regulations had little if any impact on layoffs. In fact, only three tenths of 1 percent of people who lost their jobs were let go principally because of government regulations/intervention. By comparison, 25 percent were laid off because of a drop in business demand. These numbers tracked "mass layoffs", defined as layoffs of 50 or more workers for a duration of 31 days or more. In each case in which such a mass layoff is identified, state authorities interviewed the employers involved, asking them (among other things) the reason for the layoffs. While some may argue that the BLS figures are incomplete -as many layoffs affect fewer than 50 workers at a time - these statistics are good proxies for the real-world causes of layoffs and can therefore capture the kind of problems the "uncertainty" camp have in mind.

There is another set of data which also calls into question the "regulatory uncertainty" argument. If firms were nervous about hiring new employees but had immediate profitable sales opportunities (say, before new regulations are established), then they could readily increase the weekly work hours of current employees to produce more goods and services.

The graph below reveals that weekly work hours for private-sector workers averaged 34.6 in 2007 but had fallen to 33.7 by June 2009 (the start of the recovery). Since then, weekly hours have recovered about half that loss and were at 34.2 in August. It is hard to believe that regulatory uncertainty is what is preventing employers from adding work hours to current employees to fulfill current profitable opportunities to sell goods or services. Something else must be going on: Customers and sales opportunities are simply not there. 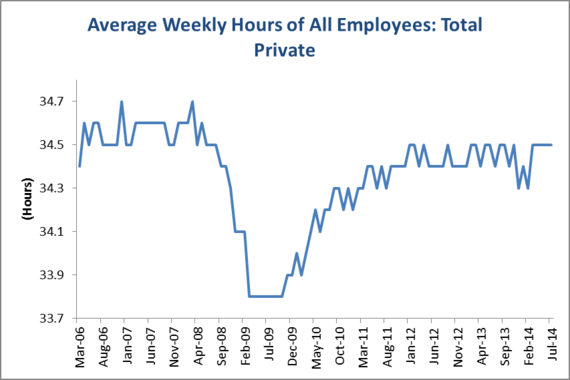 There is no strong support for the claim that financial regulations, primarily the Dodd-Frank Act, were a primary factor holding back employment. Instead of uncertainty about regulations, there is hard evidence that the absence of job creation reflects the continued unwinding of the financial collapse and the corresponding lack of demand. The graph below shows that the first quarter of this year was only the second with negative growth in the 15 quarters since Dodd-Frank was signed into law, four years ago. 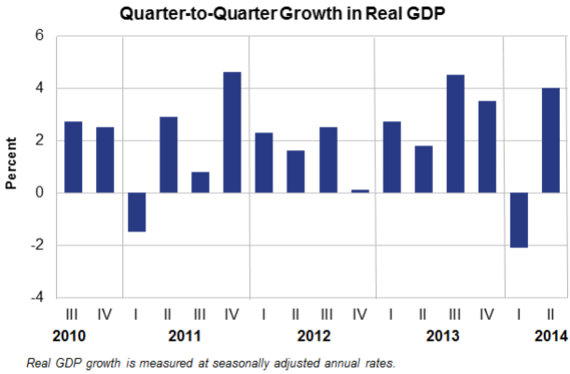 Firm investments and hiring are lower because companies have ample capacity to produce the goods and services they are selling to a shrunken market, while firms are deleveraging at the same time. The optimal response to sluggish increase in demand when interest rates are as low as they can go and households and firms are still not spending is for government to step in to augment demand. The Federal Reserve's power to make up the shortfall seems to have reached its limit, at least politically. One neglected avenue remains, however: keeping the long-term unemployed attached to the labor force in a time when we've deprived them from their unemployment benefits.

Dr. Ghayad is currently an associate at The Brattle Group in Cambridge, MA. Prior to joining The Brattle Group, he was a visiting scholar at the Federal Reserve Bank of Boston and a research advisor to the Institute for Career Transitions at M.I.T. Ghayad is the author of "The Jobless Trap". The views and opinions expressed herein are those of the author and do not necessarily reflect the views of The Brattle Group.