So, the news from Iraq today isn't good.

Iraqi forces clashed with Shiite militiamen Tuesday in the southern oil port of Basra and gunmen patrolled several Baghdad neighborhoods as followers of Shiite cleric Muqtada al-Sadr ordered a nationwide civil disobedience campaign to demand an end to the crackdown on their movement.

The potential impact is huge and this could be the beginning of the end of the decrease in violence that we've seen over the past few months.

No knows for sure what is going on yet but this seems to be an internal Iraqi fight. This is Shi'a on Shi'a violence. It is a power struggle between some combination of the various Shi'a factions in Iraq including: the Badr Brigades (loyal to the Islamic Supreme Council of Iraq), Mehdi Army (loyal to the Sadrists), and the Iraqi Security Forces (Which include elements of a number of factions).

The Bush administration may try to blame this all on Iran and confuse the issue. Iran will likely get involved in any intra-Shi'a struggle because it has so many ties into Southern Iraq. But at the end of the day, this is about the still simmering civil war in the South and the fact that we still haven't figured out how to address it or facilitate a political agreement inside of Iraq.

The million dollar question is: what is "a nationwide civil disobedience campaign?" If it is strikes and protests that's one thing. But if it is the beginning of the end of the ceasefire that is something very different. We have to wait and see. The other central question is whether or not this is in fact a decision made by Sadr and the political leadership, or if it is rogue elements of his militia who are causing the fighting.

The issue is very serious. In fact it's huge. The drop in violence in Iraq has generally been attributed to four elements 1) More American forces and the change in tactics to counterinsurgency; 2) The Awakening movement; 3) The Sadr ceasefire; and 4) The ethnic cleansing and physical separation of the various sides.

It's hard to say for sure, which of these factors was the most important. The Bush administration will tell you it's all about the troop levels. I've tended to believe it's more of a mix and was most inclined towards the Anbar Awakening and the sectarian cleansing as the important factors. But when you look at the data it really seems to indicate that the Sadr ceasefire may have been the key.

If you look at the graph that the military has been using on civilian casualties it looks to tell a pretty clear story. The first major drop in violence came in early 2007 before the troop surge. It looks like it was mostly based on the fact that the worst of the sectarian cleansing in Baghdad had been completed (I outlined this argument more thoroughly a few months back). 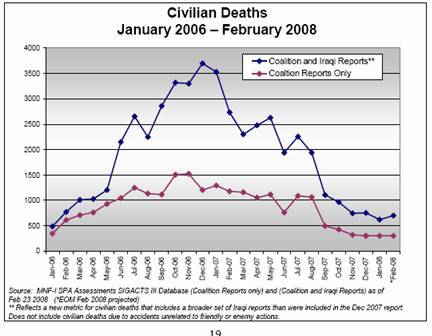 The second drop in violence came in September. By that time the full surge had already been in effect for 2-3 months and the Awakening had been going on for a year. The Sadr ceasefire occured on August 28 and suddenly boom a big drop in violence. That could be a coincidence and it could be that all four factors came together. But the data seems to point to the fact that the Sadr Ceasefire more then anything else is what caused the drop in violence in the early fall.

If that is in fact the case, we really have to hope that this is only a temporary spat and that the ceasefire holds. If not, the situation could deteriorate very quickly.