As the primary process moves toward a welcome conclusion, the fault lines within the democratic party are now registering on the Richter scale. The party leadership which has leaned decisively in the direction of the Clinton campaign finds itself exacerbating the situation and Sanders supporters are feeling increasingly disenfranchised by a process which is, depending on the rules for any given state, uneven and not sufficiently inclusive especially in terms of the large numbers of independent, young and first time voters energized by the Sanders campaign. The critical challenge facing Hillary Clinton and the Democratic party is how to best bring Sanders political revolutionaries into the party going forward.

A great deal of this appeal is driven by Sanders outright rejection of traditional appeasement politics. Hillary Clinton continues to play both sides on major issues; calling for "transitional" continued use of carbon energy including fracking, tar sands, and deep sea exploration, while using tired rhetoric promising to prioritize action to address climate change by continuing policies which the UNFCCC and scientists have declared insufficient to prevent a greater than 2 degree rise this century and the serious adverse impacts from a warming climate which will thereby ensue. Senator Sanders is unequivocally opposed to fracking, tar sands and carbon subsidies. Secretary Clinton has campaigned on a policy to expand the Affordable Care Act (ObamaCare) whereas Sanders would institute a single-payer universal system like every other developed nation. Secretary Clinton would continue the "war" on terrorism as prosecuted by the Obama administration and maintain or expand U.S. military intervention across the globe, international trade agreements, and so on. Senator Sanders has proven to be more restrained in his support for the projection of U.S. military
force and highly critical of international trade agreements which have resulted in job loss and disinvestment domestically. Sanders has also been completely transparent and released all of the transcripts of his paid speeches to Wall Street firms (zero). The Clinton campaign has yet to formulate an adequate strategy for addressing these issues to the satisfaction of Sanders and his base. 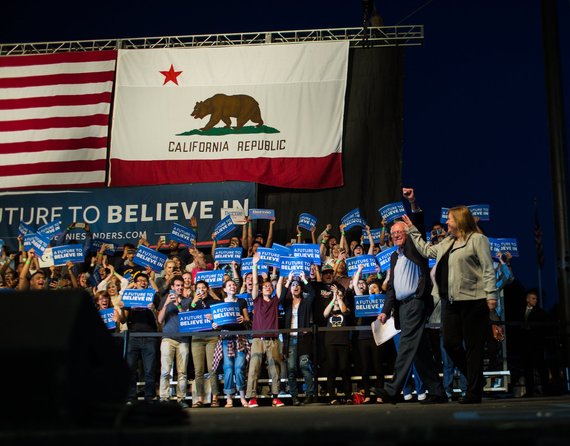 Bernie Sanders has proven to be a game changer and taken firm uncompromising positions on these and other major issues of critical importance and in so doing created a sense of optimism and enthusiastic support for real world lasting solutions to these daunting challenges. He has done this rejecting big money politics and by taking a stand that is fundamentally based on a firm sense of morality - without consideration for funding donors or corporate interests. In other words, a much needed breath of fresh air. The Sanders campaign has engaged millions of passionate Americans in the political process and expanded the liberal base substantially. If Hillary Clinton does eventually become the Democratic nominee as is likely, she will need the support of Bernie Sanders supporters to defeat Donald Trump. It is imperative that the Democratic Party now move towards a truly neutral position as the primary process is completed or risk further alienating Senator Sanders base and consequently increasing the possibility of a Trump Presidency, surely the worst of all possible outcomes.