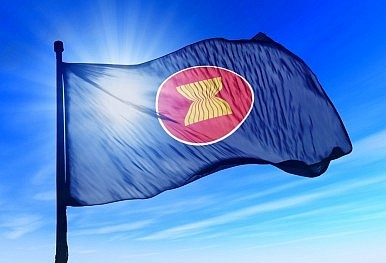 "All I need is a sheet of paper and something to write with, and then I can turn the world upside down," Friedrich Nietzsche once claimed. Words do matter -- and in international diplomacy, they can sometimes spell the difference between neglectful chaos and principled order.

After securing a landmark legal victory against China in the South China Sea, the Philippines is struggling to amass regional support. As far as Southeast Asian countries' official pronouncements are concerned, the verdict -- which aligns maritime claims, particularly by China, with modern international law -- never happened.

Though the ruling is binding under the United Nations Convention on the Law of the Sea, its enforcement is largely dependent on the international community's commitment to ensuring compliance among concerned parties.

The recently concluded Foreign Ministers' Meeting of the Association of South-east Asian Nations (Asean) revealed divisions rather than unity on the issue. After days of tense discussions among member countries, the regional body failed to come up with any meaningful statement on the Philippines' arbitration case against China.

At best, Asean managed to come out with a communique, which essentially reiterated past diplomatic cliches on the necessity of negotiating a legally binding Code of Conduct and echoed key elements of the US-Asean Sunnylands summit earlier this year.

While this is not the first time that the regional body has struggled to assert any semblance of geopolitical heft, there is growing concern that Asean is fast fading into oblivion in key East Asian affairs. The regional body has failed to leave any meaningful imprint on one of the most urgent and potentially disastrous conflicts in modern history.

Where is the love?

For four decades, the Association of Southeast Asian Nations (ASEAN) commendably established the foundations of a nascent security community in Southeast Asia, where the threat of war among neighboring states has teetered on the verge of impossibility. In the past two decades, the regional body has tirelessly sought to create a broadly peaceful, rule-based and inclusive regional security architecture.

Yet, the rise of China and its growing assertiveness isn't only disturbing the regional security architecture, but also undermining the ASEAN's internal cohesion and quest for centrality in East Asian affairs.

If ASEAN continues to fail to rise to the occasion, the South China Sea disputes will precariously descend into a full-fledged Sino-American great power rivalry and/or highly lopsided bilateral deals between Beijing and its far weaker South-east Asian neighbours.

Lacking regional backing, the Philippines is struggling to translate its de jure victory into de facto gains on the ground in accordance with international law. There seems to be a growing feeling in China that the diplomatic tide has turned, rendering the Philippines arbitration case as inconsequential as possible.

As far as regional integration is concerned, dynamism is a hallmark of survival and internal coherence. Asean's shortcomings lie in its institutional design. The decades-long "Asean way" of consensus-based decision making has handed de facto veto power to each member country.

Proposals for adopting an "Asean Minus X" or Qualified Majority voting modality on sensitive politico-security issues are yet to gain enough traction, but have become more urgent than ever.

In principle, this should not be a source of concern, provided member states are committed to agreed-upon principles and are willing as well as capable of transcending parochial interest to empower collective bargaining power.

In reality, however, the Asean unanimity-based decision-making tradition has created institutional paralysis, preventing the regional body from achieving any modicum of unity on sensitive geopolitical issues such as the South China Sea.

Since 2012, Asean has suffered repeated diplomatic setbacks, mainly due to certain member countries' unwillingness to stand up to China, which has, in turn, stepped up its efforts to win loyalty among poor and dependent South-east Asian countries by offering large-scale loans.

The regional body's role as the engine of broader integration in the Asia-Pacific theatre has also come under question. Last year, even the Asean Defence Ministers' Meeting-Plus failed to issue a final statement, thanks to the unwillingness of certain regional states to place maritime disputes on the table.

Earlier this year, Asean set a new (low) precedent when it withdrew a joint statement right after a special meeting in Kunming, Yunnan, between Chinese Foreign Minister Wang Yi and his South-east Asian counterparts. Instead of convincing China to scale back its assertiveness in adjacent waters, the regional body found itself staring into an abyss of diplomatic impertinence.

Once again, Asean fell into disarray because it could not secure unanimity on the South China Sea issue. Shortly after, Cambodian Prime Minister Hun Sen went so far as lambasting other Asean countries for making his country walk a diplomatic tightrope, while dismissing the Philippines' arbitration case against China as a "political conspiracy".

One cannot also ignore the palpable impact of China's intimidation tactics, with no less than Chinese President Xi Jinping warning that the "Chinese people don't fear trouble" when it comes to securing territorial integrity in adjacent waters. After conducting a week-long naval exercise in disputed waters ahead of the arbitral award on July 12, China deployed a nuclear-capable H-6K bomber over the contested Scarborough Shoal, which lies just above 100 nautical miles off the Philippine coast.

It did not take long before the Southern Theatre Command of the People's Liberation Army also unveiled its latest military hardware, including its much-touted "carrier-killer" anti-ship ballistic missiles. In response, America as well as major Asean members collectively called for patience and calm rather than compliance with the arbitration ruling.

Against this troubled backdrop, the latest meeting among Asean foreign ministers fell short of producing any meaningful diplomatic outcome. There was neither a mention of the Philippines' historic arbitration case nor any breakthrough in negotiating a legally binding Code of Conduct in the South China Sea.

Member states also could not agree on implementing provisional and urgent measures, such as an immediate freeze on reclamation activities and other forms of provocative behaviour, which violate the spirit and letter of the 1976 Treaty of Amity and Cooperation, the 2002 Declaration on the Conduct of Parties in the South China Sea, as well as the Six Point Principles on the maritime disputes.

For now, it seems that not only has China managed to tame the response of the international community, but Asean itself also has missed a historic opportunity to reassert any semblance of relevance in the South China Sea.

Failing to embrace wholesale institutional innovation, the only way forward is 'ASEAN minilateralism', where likeminded and influential countries in the region coordinate their diplomatic and strategic calculations vis-à-vis the South China Sea disputes.

Key ASEAN countries like the Philippines, Vietnam, Singapore, Malaysia, and Indonesia can, on a bilateral basis and on individual basis, release statements that communicate their disappointment with China's activities in the area and communicate their willingness to step up their 'minilateral' cooperation if China doesn't relent and respect the spirit, if not the letter, of the verdict.

An earlier version of this piece appeared on The Straits Times.