In January of 2014, after a long, 19-year career as a Seventh-day Adventist pastor, three theological degrees, and the slow liberalization of my belief system, I began a personal exploration of atheism that I called, Year Without God. I set out to understand the world without my "god glasses" on. In short, I wondered, how does a naturalistic worldview hold up to scrutiny?

Very quickly I grew weary of the God question. In a March 10, 2014 post entitled, "Deconstructing (a)theism," I wrote,

From the first weeks of my exploration of atheism the closest thing I've come to a 'conclusion' so far is that the question of the existence or nonexistence of the Jewish/Christian/Muslim god is not the best or most important question, though I admit it is a very interesting one and one that won't ultimately leave us alone.

I wrote a few things in this blog post that now, over a year and a half later, I disagree with, but in principle, I have felt since very early, that the atheism v. theism debate will ultimately get us nowhere. A few sentences later I wrote, "I for one hope this debate has nearly run out of gas, but I am being naive, I'm sure." 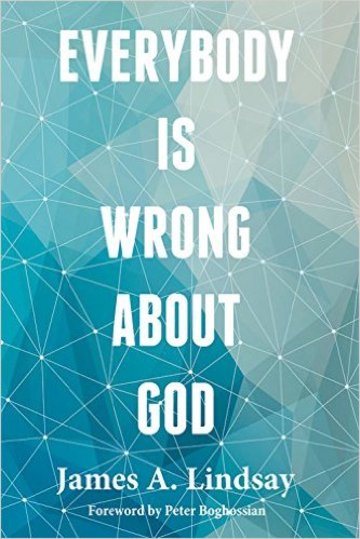 To my delight, James Lindsay has stepped into this particular conversation with a new book entitled, Everybody Is Wrong About God (Pitchstone Press 2015). Lindsay holds a Ph.D. in Mathematics and is the author of two previous books, God Doesn't; We Do: Only Humans Can Solve Human Challenges and Dot, Dot, Dot: Infinity Plus God Equals Folly.

From the very first page, he throws down the gauntlet with a series of bold statements that he then proceeds to unpack in the book:

Second, "people who do not believe in God have it more or less right, and in fact, that at the level of ideas, their view has already rightfully won."

Thirdly, he claims that understanding the difference between "God" and God is essential to putting God behind us and moving on with our lives in productive ways.1

This book will rightly upset people on all sides of this debate. Hence the title, Everybody Is Wrong About God. Those who are still on the side of theism will no doubt find Lindsay's declaration that "theism has lost the war of ideas," hubristic. Many on the atheist side will protest that naming and claiming "atheism" is essential in the struggle against religious hegemony in the United States in particular.

In the latter camp, no one is more vocal than David Silverman, President of American Atheists, who earlier this year on a CNN special entitled "Atheists: Inside the World of Non-Believers" argued that humanists and freethinkers who don't want to use the word "atheist" are lying.2 The assumption here is that people don't use the word atheist because they're afraid to, or because of stigma. While this may be true for some people, others, like Lindsay, find the word profoundly unhelpful and even counterproductive.

Lindsay's tone alternates between aggressive and compassionate, even sometimes within the same sentence. Like a physician delivering difficult but important information about your serious health condition, he writes with sharp clarity.

Theism is a term that still enjoys the pretense of being technical and interesting in the lexicon of philosophers. The central contention of this book is that theism, being a kind of mythology, isn't technical or interesting; it's the wrong model for making sense of the myriad ideas caught up in the word "God," which is the only reason it's discussed at all.3

The distinction between God, as the word is meant by theists--whether it is a supernatural, interventionist being that is ritually engaged by believers, or an "unconditioned" beyond-being--and "God," (in scarequotes) as a signifier of complex human psychosocial needs, is the key to understanding Lindsay's argument.

In short, he claims that atheism and theism exist in a kind of symbiosis, one enabling the existence of the other. Atheism is a not-thing; a negation. It exists as a counterpoint to theism and can only continue to be a distinct idea if the notion of theism is still a credible set of ideas. Escaping from this vortex is essential if we are to move to the important issues facing humanity and the planet. We do this, Lindsay argues, by calling the question on theism, pronouncing it dead, and then moving on to a post-theistic conversation about life itself--the actual psychological and social issues that are the very real issues keeping the idea of "God" alive.

This book will likely not be convincing to most theists given that the author does not spend time trying to prove his claim that theism is dead. He and countless others have done this repeatedly in other books, articles, debates and personal conversations, ad nauseum. Having just returned from the American Academy of Religion where I listened to scholars of history and theology discuss "God after the death of God," I have a clearer sense than ever before that theism is on life support. Theology has reached the point of being a circular, nonsensical exercise in missing the point. What we need is a conversation about "God" (the psychosocial needs that are real and important and that get lost in conversations about God) and how we can move on with our lives.

The last third of the book is dedicated to making concrete, though very general, suggestions about strategies for moving to post-theism, rather than atheism. I sincerely hope this portion of the book is used like a white paper in secular and humanist organizations. My own recent efforts in founding Life After God, working one-on-one with individuals who are leaving God behind and exploring post-theism for the first time, reflect the direction that James Lindsay is going, which is why his book resonates so deeply for me. From the days of my Year Without God I suspected that atheism was a dead end. I tired almost immediately of the circular conversations about theology.

Everybody Is Wrong About God is a manifesto; a call to abandon the battle over God, which has already been won and which some are still far too invested in fighting, and move on to the main front in the struggle for the future of all sentient beings. Not everyone will agree with Lindsay's conclusions, but everyone who cares about secularism and humanism should read this book and discuss it vigorously.

*This review is based upon a pre-publication draft sent to me by the author. Exact pagination was not available at the time of writing.
1 From the Preface
2 See also, "Why Humanists Are Still Misunderstood: CNN's Documentary on Atheists in America" at TheHumanist.com, http://thehumanist.com/arts_entertainment/culture/why-humanists-are-still-misunderstood-cnns-documentary-on-atheists-in-america (accessed Nov 25, 2015)
3 From Chapter 1