For decades, the world has been debating whether China's rise will be peaceful or threatening, or perhaps a combination of both. This is a relevant discourse, precisely because China's rise is perhaps the question of the century. "It's not possible to pretend that [China] is just another big player," Singapore's legendary leader Lee Kuan Yew argued in the early years of the post-Cold War period. "This is the biggest player in the history of man."

In the economic realm, China has arguably been a net-positive force for Asia and the global economy, reinforcing the 'peaceful rise' narrative forwarded by Beijing and its sympathizers. Much of the world has accepted the fact that China, poised to become the largest economy in the near future and already the world's largest trading nation, is the new center of gravity in economic terms. This proud civilization can once again credibly claim to be the Middle Kingdom.

The Philippines' 11th hour decision to join the China-led Asian Infrastructure Investment Bank (AIIB) is a poignant reminder of how even Beijing's most alienated neighbors can't ignore its economic pull. Despite vigorous American lobbying against the fruition of the AIIB, all of its major allies, with the exception of Japan, have joined the China-led multilateral institution.

But the 'peaceful rise' narrative is severely under question when one looks at China's behavior in the geopolitical realm, particularly with respect to its weaker neighbors. In an effort to augment its sovereignty claims over what it considers as its national "blue soil," China has inadvertently encouraged a growing number of nations to coalesce against it. One could argue that China has overplayed its hand, unleashing a dangerous strategic dynamic that threatens the whole region.

Throughout the early years of this decade, China rapidly and inexorably altered the maritime status quo in East Asia, wresting control of Philippine-claimed Scarborough Shoal and deploying a giant oil rig into Vietnamese-claimed waters in the South China Sea. In possession of cutting-edge technology, and confidently overseeing decades of relentless military modernization as well as paramilitary mobilization, China has transformed a whole host of contested low-tide elevations (LTEs), atolls, shoals and rocks into full-fledged islands. Within twenty months, it has reclaimed seventeen times more land than the other claimants combined over the past four decades.

While such a massive geoengineering project has strengthened its hand on the ground, allowing Beijing to project power from these features across the South China Sea, it has angered regional and external powers and gradually unleashed a robust countercurrent to its plans of local domination. Beijing's whiplash approach to regional territorial disputes is undermining its own interests as well as that of the whole region, which desperately relies on stability in Sea Lines of Communications (SLOCs) for uninterrupted and safe commerce.

Beijing is now locked between the rock of domestic hawks, who are vigorously pushing for greater Chinese strategic grip on adjacent waters, and the hard place of growing international backlash, which is undermining China's soft power--and its claim to regional leadership. 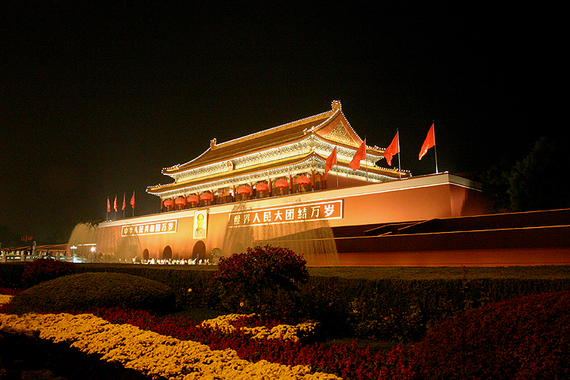 Back in the mid-1990s, the Canadian political scientist Gerald Segal introduced the concept of "constrainment," an arguably more reasonable alternative to Cold War-style "containment strategy," which provided diminishing utility vis-à-vis post-ideological and highly economically integrated rising powers such as China. As Segal and other regional experts correctly assessed, China is not a monolithic expansionist power, and is in fact too large and consequential to be contained. It was a timely strategic doctrine that was not far from what George Kennan--who would come to lament the misappropriation of his concept of containment--had in mind throughout the Cold War.

In an influential article for the journal International Security, Segal underscored China's strategic opportunism. He argued that "China's [foreign] policy will remain softer only if pressure is maintained," so a constrainment strategy is "intended to tell [China] that the outside world has interests that will be defended by means of incentives for good behavior, deterrence of bad behavior, and punishment when deterrence fails." Segal made it clear that a constrainment strategy can work if "its neighbors and powers further afield. . . appreciate that they must act in a concerted fashion both to punish and to reward China." For him, an optimal strategy "must use elements from a strategy of engagement as well as the balance of power."

Today, we are beginning to see the emergence of a "constrainment" strategy against China. Smaller powers like the Philippines have resorted to lawfare (legal warfare) in order to leverage relevant provisions of United Nations Convention on the Law of the Sea (UNCLOS) against China's blatant disregard for the very convention it has signed up to (see my analysis of the arbitration case here).

For the Philippines, China's assertive maritime posturing--regarding its deployment of military and paramilitary patrols to contested features, coercive occupation of contested features like the Scarborough Shoal and Mischief reef, harassment of Filipino fisherfolk, massive construction and reclamation activities across the Spratly chain of islands and destruction of the area's ecology--are in clear contravention of regional principles such as the 2002 Declaration on the Conduct of Parties in the South China Sea (DOC) and the UNCLOS.

More crucially, the Philippines is asking an arbitration panel (formed under Art. 287, Annex VII of UNCLOS) at the Permanent Court of Arbitration (PCA) at The Hague to also nullify China's sweeping territorial claims, namely the notorious "nine-dashed line," based on dubious claims of "historical rights." This way, the Philippines hopes to use the moral force of international law to embarrass China into better compliance with modern international law.

While it is easy to dismiss the Philippines's legal maneuver as naïve and inconsequential, especially since arbitration bodies under UNCLOS lack compliance-enforcement mechanisms, it would be shortsighted to overlook the strategic consequence of Manila's bold move to take Beijing to court.

Non-claimant states such as Singapore, which has welcomed permanent American naval presence on its soil as a hedge against China, have repeatedly called for the resolution of the South China Sea disputes in accordance with international law. This could be interpreted as an implicit statement of support for the Philippines's arbitration case against China. Even the Association of Southeast Asian Nations (ASEAN), which has grappled with internal divisions and institutional atrophy, has emphasized the necessity for the rule-based resolution of the disputes.

With the Philippines successfully overcoming the jurisdiction and admissibility hurdle, other regional states are in a position to also threaten China with a similar suit. While Vietnam has been dangling such option for quite some time, and is now carefully preparing its case, even non-claimant states such as Indonesia, which are fearful of China's maritime assertiveness and welcomed greater military cooperation with America, have threatened to take China to court.

In effect, the Philippines has unleashed a "legal multiplier," which presents China with the prospect of multiple arbitration showdowns. If anything, since other regional states can now more credibly threaten China with a similar legal action, they are in a position to, at the very least, extract certain concessions in exchange for not filing a case per se.

While China obviously has the option of rejecting any unfavorable arbitration verdict, the prospect of multiple legal suits will seriously undermine the Middle Kingdom's claim to regional leadership and peaceful rise. Thanks to the Philippines's lawfare, China could soon be branded as an international outlaw by a third-party arbitration body composed of one of the world's leading legal experts. During the latest ASEAN and APEC (Asia-Pacific Economic Cooperation) summits, China was desperate to torpedo any serious discussion of maritime disputes and was clearly isolated, especially as a whole host of regional countries and external powers ramped up their criticism of Chinese reclamation activities in the South China Sea.

China's assertiveness in the South China Sea--embodied by its notorious "cabbage strategy" and various forms of "salami-slicing tactics" against smaller claimant states--entered an intensified phase throughout the early years of the Obama administration. But for long, President Barack Obama held back, relying instead on diplomacy and bilateral engagement with China.

Back in 2013, he held an intimate meeting at the Sunnylands retreat center in California with his Chinese counterpart, President Xi Jinping, in order to develop an element of great-power rapport. Framing Sino-American relations as "the most important bilateral relationship in the world," the Obama administration always emphasized engagement rather than deterrence.

To be fair, Xi tried to assuage fears of impending great power conflict by claiming, "The vast Pacific Ocean has enough space for two large countries like the United States and China." But, quite controversially, he ended up calling for a "new model of great power relations," which many interpreted as a demand for American recognition of Chinese core interests such as the Beijing's sovereignty claims in the South China Sea.

The Obama administration tried to double down on the engagement track when the two leaders met in the White House earlier this year, paving the way for the expansion of much-needed confidence-building measures between the two powers' armed forces, especially in light of growing incidents of Chinese harassment against American aircrafts and vessels roaming the Western Pacific.

Almost half a decade into the "Pivot to Asia," the Obama administration has gradually--but with delays and seeming reluctance--stepped up its efforts to directly challenge Chinese expansionism in East Asia. After much hesitation, the United States finally cleared the deployment of destroyers well into the twelve-nautical-mile radius of Chinese-claimed features in the Spratly chain of islands. Whether intended or not, however, the Obama administration ended up mismanaging the PR campaign around its more robust Freedom of Navigation (FON) operations against China. By invoking the right for "innocent passage" as a legal justification for its FON operations, the Obama administration inadvertently lent credence to China's (implicit) sovereignty claims over LTEs like Subi Reef, which have been artificially augmented in contravention of UNCLOS (see Article 60).

A more accurate understanding of UNCLOS would suggest that the principle of innocent passage presupposes the existence of a territorial sea, which could not be the case when one talks about land features that are, in their natural state, invisible during high tide. Even if the United States chose to suspend the offensive military capabilities of the USS Lassen, for instance, shutting down its fire control radar and not flying any helicopters in the area, the right for innocent passage precludes activities (see Art. 18, Sec. 3, Part II of UNCLOS), which are "prejudicial to the peace, good order or security of the coastal State," including "collecting information to the prejudice of the defense or security of the coastal State." China also didn't occupy any nearby naturally formed islands in order to use Subi Reef as its baseline to project a bumped-out territorial sea; Thitu Island is occupied by the Philippines.

But one can't deny that a storm is gathering against China's revanchist maneuvers in the South China Sea. The Royal Australian Air Force (RAAF) has joined maritime patrols in the area, and the Japanese Maritime Self Defense Forces (JMSDF) could soon join the fray. The United States Navy is poised to conduct its second quarterly FON operations against China in the coming month, most likely targeting the Mischief Reef, which, similar to the Fiery Cross and Subi reefs, has been artificially augmented into an island with advanced military facilities and airstrips.

Like never before, the Xi administration is grappling not only with growing diplomatic pressure and legal backlash, but it is also confronting an American-led maritime coalition of the willing, with little interest in Chinese domination of one of the world's most important SLOCs.

An earlier version of this piece was published on The National Interest.