I am full up to my ears with old men dreaming of wars for young men to die in. ~ George McGovern

The artist and designer Maya Lin credits much of her prodigious inspiration of the winning Veteran War Memorial (1982), submitted when still just a Yale undergraduate, to her daily passage through The Memorial Rotunda of that University's heavily pedestrian trafficked Woolsey Hall. 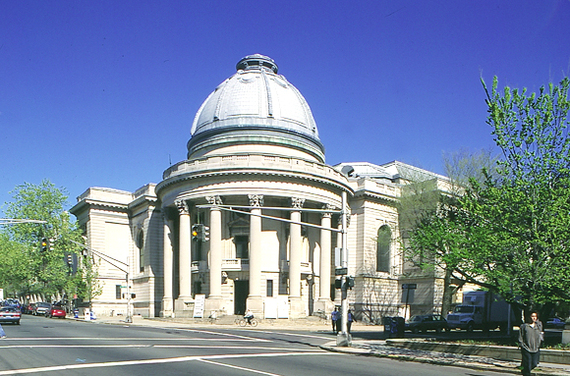 This great Beaux-Arts pile constructed for Yale's bicentennial celebration in 1901 by the firm of Carrère & Hastings (best known for their lion-bedecked New York Public Library) sits at a hinge point in the overall campus plan. It was always meant in part as a war memorial but it wasn't until 1909 that a patriotic band of alumni made it official with the hire of sculptor Henry Hering to frame the narrowest corridor with a tribute to the University's casualties from the Civil War. What made it path breaking was its intermingling of the names of Union and Confederate fallen heretofore denied wherever such a tribute had been built: Above or below the Mason-Dixon. 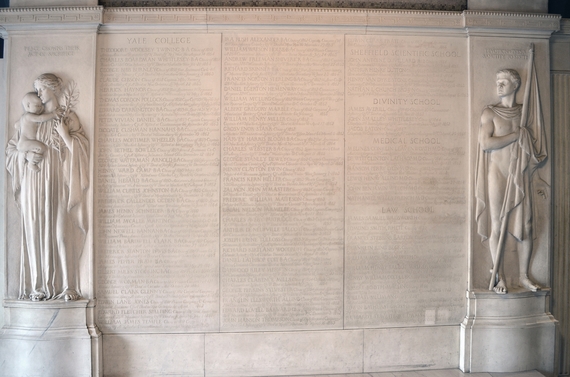 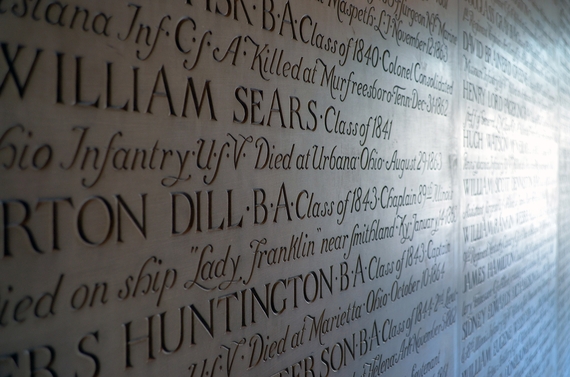 Atop the honor roll incised (as are the names) with the timeless dignity of Requiem typeface, there is even the emphatic embrace of such a reconciliatory gesture: "Love and tears for the Blue/Tears and Love for the Gray." The divisive savagery of slavery, like that of the war, is washed clean at the service of a binding national future.

The tradition continued soon thereafter with a retroactive nod to the the known Yale dead from the War of Independence, 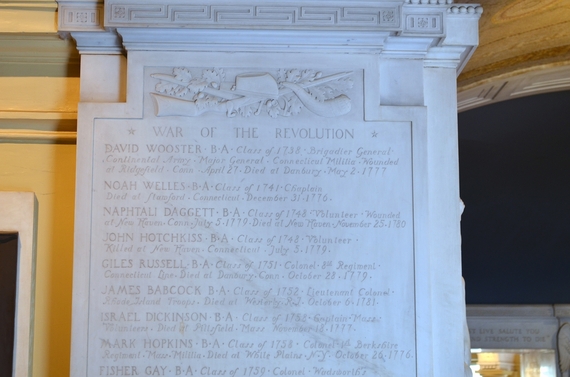 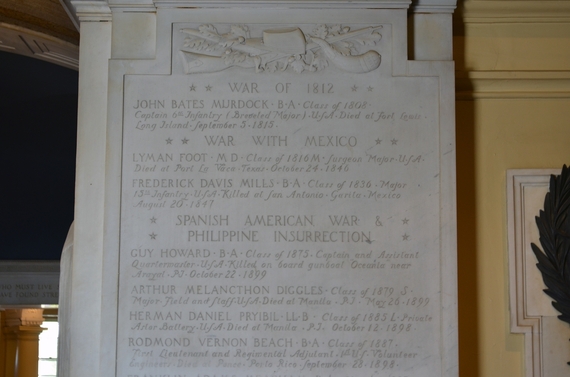 those few fallen from the brief Spanish-American War, and even missionaries caught up in China's Boxer Rebellion. Then it was followed balefully and all too suddenly by the tragic outbreak of the first World War. 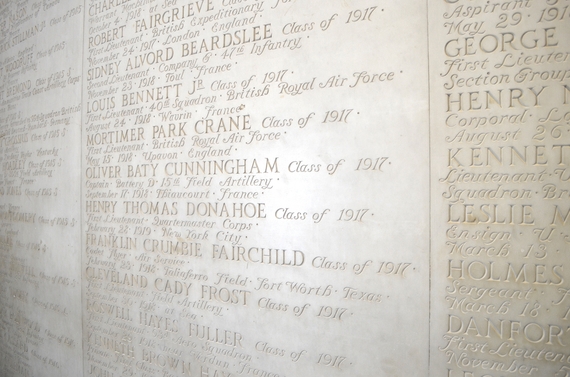 Ultimately there are 225 casualties engraved here: Name, class, degree program, date, and place of death. Yale students even became the first Americans to enter the War in 1916, the year prior to Wilson's call to Congress for a formal American declaration, with creation of the little known Millionaires' Squadron, which was a " privately-funded air militia that became the founding squadron of the U.S. Naval Air Reserve." 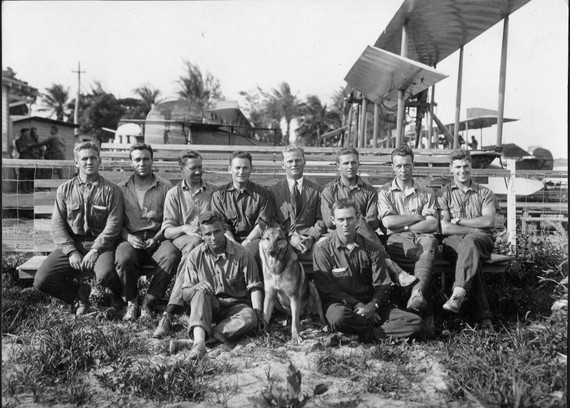 This surely was volunteering at a new zenith: to invent and bankroll an army in which in turn to enroll. Such honor of service and shared sacrifice were by then a hallmark of civic obligation to a nation that had fostered such personal privilege in the first place. The elite of Yale led the charge in more ways than one. They understood the call of duty in the cause of freedom and the need for a just resolution. 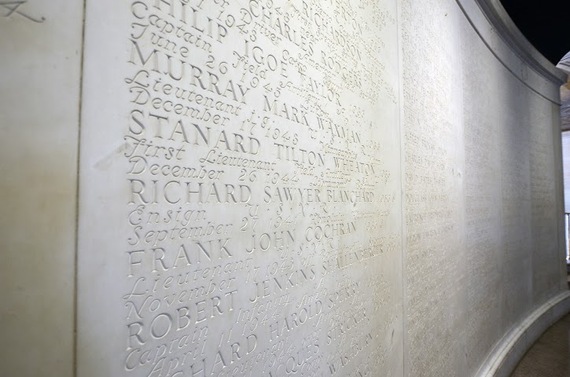 Yale's first casualty in WWII, who died at Pearl Harbor

with those killed in Korea 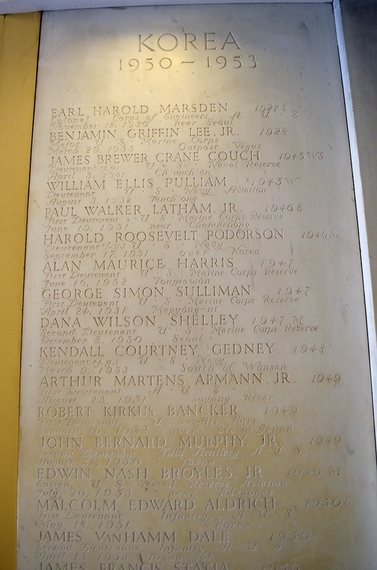 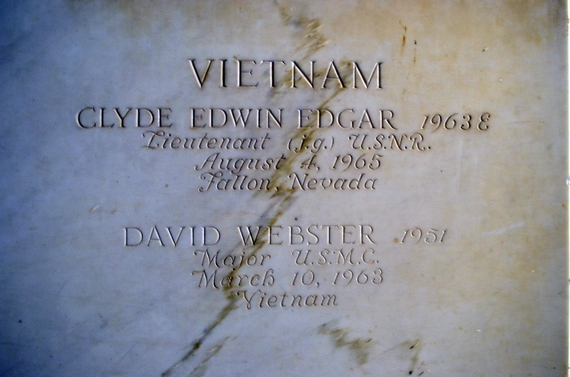 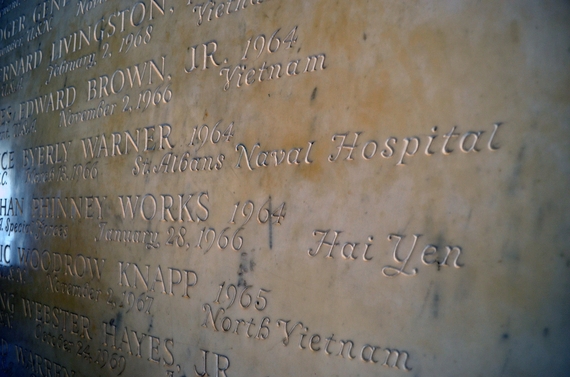 The carving of those last victims was being done behind plastic barriers during Ms. Lin's college years in the early 1980s, when she paid close attention to the this act of memory unfolding name by name of tragic if unknowable stories. Most however passed through with never stopping to contemplate either the present work or the continuum of sacrifice it was measuring.

And there in New Haven at least, this particular metaphor for a shared universal American call to duty comes to a halt. While joyous news for one privileged community, it is nonetheless news that ignores the contextualizing social contract on which such privilege relies and helps to maintain.

There is no inscription there now or planned for our two most recent wars, both launched by presidents of one family of Yale graduates.

The fortuitous reason is simple: there were no casualties. In fact, other than its two commanders in chief, it is not clear how many students, graduates, or associated others served in the chain of command or as public policy advocates promoting these incursions abroad.

McGovern's "old men" in these instances were decorated WWII veteran George H. W. Bush, recipient of the Distinguished Flying Cross medal for battle in the Pacific, 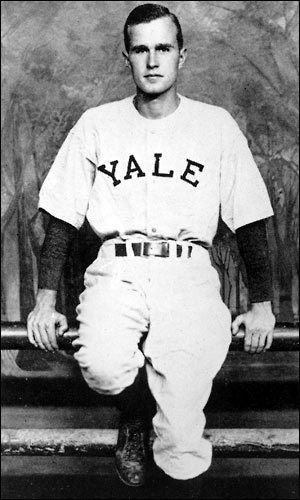 and his son, President George W. Bush, who avoided the bloodied jungles of Vietnam by enlisting in the Texas Air National Guard. 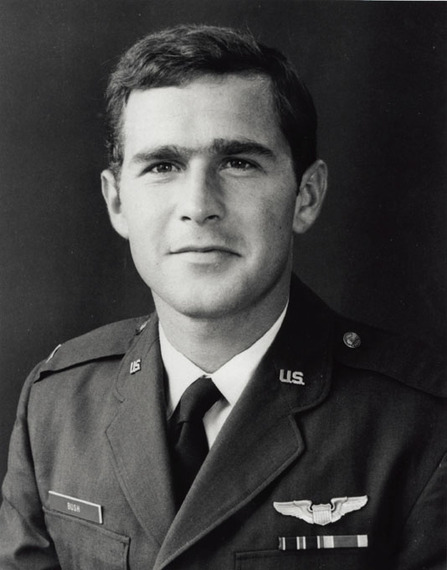 He dodged the war in gentlemanly manner if not the draft per se.

And had there been the sons and daughters sprung primarily from America's elite who had fallen, they still would not have appeared under the word "war." Today we fight "Operations": Desert Storm (Kuwait and Iraq, 1991); Enduring Freedom (Afghanistan 2002 -2014); and Iraqi Freedom (Iraq 2003-2011). While the mission went unaccomplished, the collapse of the entire Middle East order was, achieved by an unleashing of historic forces that our leadership overlooked to the extent they understood it in the first place. This new Orwellian label of "operation" disconnects and denies us the poetry of loss.

Except from their immediate families, today's volunteer and professional armed services are so compartmentalized and segregated from the rest of society (apart, perhaps, from the now and frankly patronizing labels of "returning heroes" or "wounded warriors") that the campaigns they serve in have no direct impact on most Americans' daily lives. In fact, at the outbreak of Operations Enduring and Iraqi Freedom-- except for those sent on numerous successive frontline tours -- the rest of us had to make do with a tax cut. That fact seems to define the opposite of sacrifice. We are not even asked to help pay for their efforts but pass its cost along to our children and theirs.

Indeed there are no more casualties and no more wars carved in Memorial Hall. For the last two generations as well as the foreseeable future, the requiem of Woolsey Hall is complete. Its noble classical architecture and decoration are now set in landmark amber. Cast as memory today are both the names themselves as well as the whole notion of such a sacrifice, whether by choice or conscription fairly enforced. 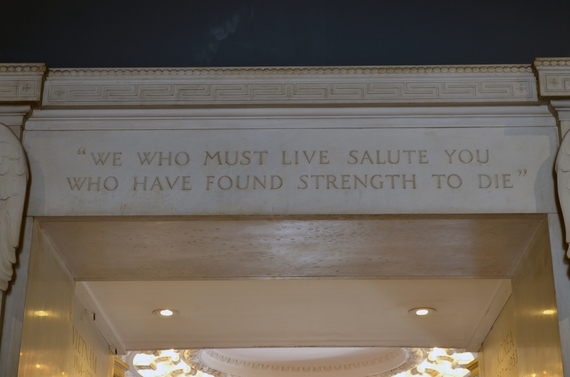 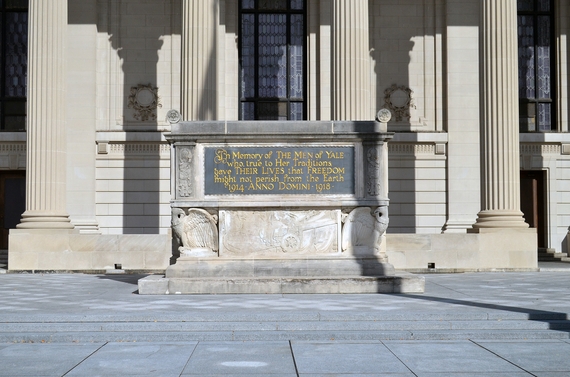 On Veteran's Day this year, marking as it does one hundred years since the outbreak of the "War to End All Wars," it behooves Americans not only to pause and consider its war dead even if just doing so by pondering the anonymous tale of a single lapidary name, but also to think about a contemporary society where the whole concept of such binding sacrifice is equally dead.