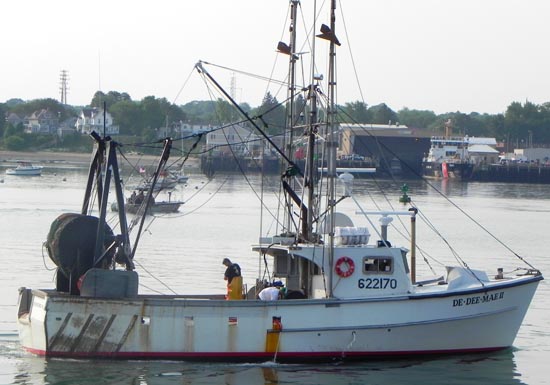 Last week marked a historic turning point for many fishing communities when the New England Fishery Management Council approved deep cuts to the cod quota that are expected to put many fishermen out of business. "That's it. I'm all done. The boat's going up for sale," said Gloucester fisherman Paul Vitale in response to the news. Fishery managers had little choice but to cut the quota- there just isn't enough cod. But will the decline of cod spell the end of the New England fisherman?

New England was built on cod. They even named a cape after it. From Portland to Boston, Gloucester to New Bedford, the abundant fish populations swimming in the North Atlantic helped establish thriving port towns. For centuries, fish has been the cultural and economic backbone of the region. But in the early days, there was no such thing as fishing regulations, and as technology developed we put increasing pressure on a seemingly endless fish supply. It wasn't until the 1980's, when faced with a near collapse of the fishery, that we wised up to the real impact of human greed. Strict fishery management began, and New England finally adopted a catch share management program in 2010. For the past few years, fishermen have been working hard to build a sustainable fishery, but they were helpless in the face of a larger culprit: climate change. In the past year, water temperatures in the North Atlantic have reached record highs - 2 to 3.5 degrees above average - and cod swam north toward colder seas.

The situation in New England is a grave reminder that we can no longer afford to ignore the impact of human decisions on our natural world. But as New England faces a grim reality, it's important that we stick by our fishermen. As fish eaters, we can make choices that will make or break the future of traditional fishing communities. Now is the time to get acquainted with cod's close cousins, abundant haddock and pollock, and create a market for the species that these fishermen are still able to catch. We also need to adopt a seasonal approach to eating fish. Groundfish in New England are most plentiful in late fall and winter. Just as eating seasonal produce helps small farmers, learning to enjoy fish at the time of year when fishermen catch it keeps demand in line with supply and in turn stabilizes prices for fishermen.

The fishery science and low catch rates make it clear that major cuts to the cod quota are needed to meet legal mandates, but this is difficult medicine for fishermen to swallow. "It will be tough for the next few years," said fish house owner Michael Castigliego of Somerset, MA. "But we'll get through it. It should be better three or four years from now. At least, that's what we hope." If we want our traditional working waterfronts to endure, let's remember on the long road ahead that our independent fishermen are a vital part of our food system.