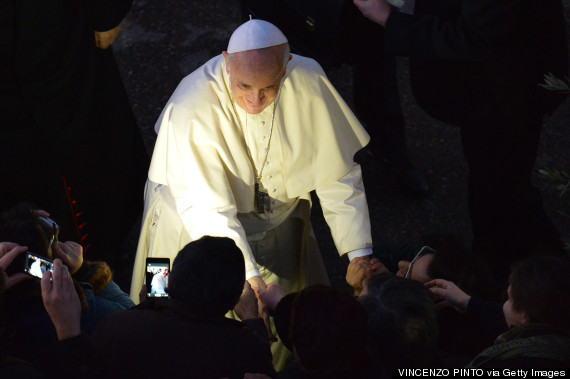 The Papacy is a monarchy. It is recognized as such at international law. Like monarchies of all places and times, the papacy has depended on mystification to keep its reign intact. Monarchies require distance between ruler and ruled. They demand an elaborate etiquette, pomp, circumstance, ritual and respect. The person of the monarch stands apart from and over his subjects. The papal liturgy is about reverence for the Eucharist, of course, but its rich and lavish formality says at least as much about the Holy See's headship and authority as it does the reception of the body and blood of the Lord.

These statements certainly describe the traditional trappings of the papal monarchy, the oldest monarchy in Europe. Historically, you can plausibly contend that the popes were exercising civil authority by the later sixth century, when Pope Gregory the Great (590-604) was forced, thanks to the vacuum of power in Rome, to rally the City's civil forces. The papal monarchy was placed on a more permanent footing in the year 756, when the Frankish King Pepin the Short, in gratitude for Pope Zachary's complicity in overthrowing the Merovingian dynasty, made a formal gift to the Pope of lands he had conquered in central Italy.

Henceforth, until the late nineteenth century, the popes exercised full civil jurisdiction over a substantial swath of territory, extending north and east from Rome, across the heart of the Italian peninsula, all the way to the Adriatic. This expanse of land was known as the Papal State. Popes were fully responsible for the administration of secular laws. They enforced the criminal law, they commanded armies, they resolved disputes among local landowners. They ruled, in other words, in the same way, and by the code, as any European monarch.

And this pattern persisted all the way into the latter nineteenth century. Pope Pius IX, the famous Pio Nono (1846-1878) commanded an army of 15,000 men. He commissioned a navy (the marina pontificia), complete with steamships, schooners and a well-armed corvette, the Immacolata Concezione. Pius supervised prisons and even permitted executions to go forward. He was, after all, a secular monarch in addition to being the spiritual head of a world-wide Church.

And there evolved, at the at the court of this central Italian monarch, an elaborate court ritual. The popes were carried in the sedia gestatoria -- essentially an elevated chair -- as they processed to St. Peter's Basilica or to St. John Lateran. They wore as their crown the triple tiara -- a crown of jewels and gold layered together in intricate, overlapping patterns symbolizing their temporal and spiritual powers. And there was also a highly elaborate form of speech and address. The Pope, of course, was "His Holiness." A cardinal is "His Eminence," and so forth. Ceremonies featured elaborate modes of dress that bore all of the ornaments and adornments of the renaissance courts to whose world the papal monarchy still very much belonged.

The logic of these elaborate pretensions was dealt a heavy blow in 1870, when the papal army was routed in the Siege of Rome and Garibaldi's troops entered the Eternal City in triumph. Italy was now united politically for the first time since the Roman Emperors, and the popes retreated to the Vatican, where they still exercise secular as well as spiritual power over the precincts of that tiny (110 acre) city-state.

Pope Leo XIII (1878-1903) realized that the papacy would never recapture its secular splendor and sought to carve out for the Holy See a new place in the world -- as a universally -- recognized voice of conscience. And that is the role the popes have sought to fulfill, more or less successfully, ever since Leo's day.

As the logic of the papal monarchy diminished, some of the embellishments were dispensed with. Popes no longer ride the sedia gestatoria. They no longer wear the triple tiara. But other aspects of the monarchy remained firmly in place until the auspicious year 2013.

It was Pope Benedict XVI, not Pope Francis, who put the earth-shattering changes in motion. In what must be counted as the greatest, noblest gesture of his pontificate, he announced in February, 2013, that he would abdicate. This was unheard of. One does not renounce the weight of divine office. He was Pope by the judgment of God. And now he would surrender that title. Dante had poetically consigned Pope Celestine V (1294) to Hell for resigning the papacy. Benedict did not fear to take the same step. To his great, great credit.

And then came the circumstances of Pope Francis' election. He appeared before the crowds of St. Peter's Square dressed in a simple white cassock. As he robed for his appearance on the balcony, the master of ceremonies offered him the elaborate mozzetta that Benedict was so very fond of wearing. Francis politely declined, although the urban legend that sprang from the incident -- which has the newly-elected Pope informing the startled master of ceremonies that "the carnival is over" -- can at least be seen as a foreshadowing of future events.

And then he repeatedly referred to himself simply as the Bishop of Rome. The cardinals whom he received at his papal installation mass did not kneel before him to do him homage. He met with them standing, as equals. He proclaimed that he wished a "poor church, for the poor."

And since those early days, on matters of style as well as substance, Pope Francis has acted to curtail the papacy's monarchical aspects. He skipped the grand musical event of the summer -- a June Beethoven concert -- to spend more time getting to know papal nuncios from around the world. He traveled to Brazil and walked among the slums. And on his return flight, he conducted a free-wheeling interview on the papal plane. And did he ever make news!

In the quiet month of August, Pope Francis cold-called a young man named Stefano Cabizza . Stefano had asked the Pope to pray for him, and now Francis wished to tell him that he had. And he had more to say to Stefano. He asked the nineteen-year-old to call him "tu" -- an informal form of address, signifying not hierarchy, but equality between the speakers. Francis explained that Peter was not called "Your Excellency" by the Apostles or by the other followers of Jesus, and that Stefano should enjoy the same freedom in addressing Peter's successor.

These practices have only intensified in recent months. Pope Francis, it seems, has developed a friendship with the atheist editor of La Repubblica, Eugenio Scalfari. He received homeless men at his residence and had them dine with him on his birthday. Who knows what happens next?

The logic of the papal monarchy died in Garibaldi's cannonades back in 1870. Ever since, the papacy has been transitioning to something quite different. And Pope Francis is accelerating that transition, making it complete. On his watch the papacy is rapidly becoming what it should be -- a great voice and witness for world Christianity in the spirit of the Gospels. We can only wish him well in this difficult undertaking.