My son and I are supposed to be in Mobile, Alabama, right now at the Southern Closed tennis tournament. We were supposed to leave yesterday for what was going to be his last junior tournament. He and I both had done all the pre-tournament prep. You know what I mean. He strung and re-gripped his racquets and did his laundry. I stocked up on snacks and drinks.

He went to hit. I went to yoga. We were ready to pack our suitcases, load up the car, and drive the 5+ hours from Atlanta to South Alabama. I was already thinking about how I was going to structure my post to share this final junior tourney experience.

About 2/3 of the way through my yoga class, I looked in the mirror and saw my son's reflection as he motioned for me to come talk to him. I had a moment of panic. Any time your teenage son shows up at yoga unannounced, you can't help but go to the worst-case scenario. The expression on his face didn't help my nerves. Something was up.

Now, please understand that I had been trying to talk my son out of playing both our state qualifier and the sectional closed ever since he first mentioned signing up for them. He has committed to college. His junior ranking is irrelevant at this point. His Tennis Recruiting Star Rating is irrelevant. The only thing that matters now is continuing to improve and develop his game for college. My feeling was that he could better accomplish that by playing some Intercollegiate Tennis Association and Men's Open events. But, he insisted that he wanted to finish out his junior "career" with these last two tournaments. Much as I tried, there was nothing I could say to change his mind.

When I walked out of yoga, he said, "I need to talk to you about Mobile." We were scheduled to head down there in about two hours.

My son has had some lingering back pain over the past few weeks. He had been treating it with visits to a chiropractor, maximum doses of Ibuprofen, and lengthy icing sessions after playing. All of that seemed to help a little, but, still, the pain was there. What he really needed was several days of rest, but his tournament schedule was such that that wasn't an option.

While he was warming up yesterday morning, the pain was pretty bad which made him start reconsidering his decision to play a 160-draw junior tournament a couple of weeks before he was heading out to SoCal for some intensive training and tournament play. After he hit he called my dad, an orthopedic surgeon, to talk to him about his pain level and whether playing in this event would interfere with the healing process. My dad told him the most important thing at this point was to be pain-free and healthy for his time in California, both this summer and once his college career began. My son asked, "If I were your patient, what would you tell me to do? Play in the tournament or pull out?" My dad answered, "Withdraw from the tournament."

Thankfully, my son took his grandfather's advice and then came to my yoga class to let me know that we would not be driving down to Mobile. He was clearly distraught, still not convinced he had made the right decision no matter how many times I confirmed that he had. I hugged him, and he told me with a sad smile that I should go back and finish yoga and that he would see me at home.

While I was in Legs Up The Wall and Shavasana, my son was at home taking care of business. He called then emailed the tournament director to let him know he was withdrawing (luckily, he caught the TD before the draws were posted so an alternate player could take his spot). He called his doubles partner to let him know so he could find another guy to play with. And he started plotting out his rest/training schedule for the next couple of weeks until he leaves for Los Angeles.

He actually apologized to me, saying that he felt bad we weren't going to formally have our Last Junior Tournament Experience. Then he headed over to a buddy's house to hang out in the pool for a bit. There was still this aura of sadness around him, but he seemed to be coming to terms with his decision.

A little while later, I got a notification on my phone from Instagram. Here's what I found underneath a photo of my son with my husband and me when I opened the app: 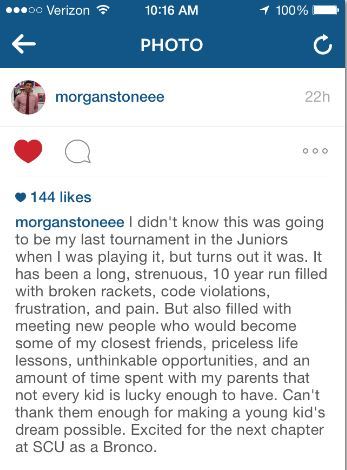 So, while I didn't get to experience the definite closure I had imagined of knowingly watching my son play his last junior tennis match, I got something greater.

Reading the above words brought tears to my eyes. Not tears of sadness but rather tears of pride and happiness when I realized my son recognized -- and was truly grateful for -- all the gifts tennis has bestowed upon him.

My son and I have traveled a long road together these past 10 years. It hasn't always been easy. In fact, I would say there have been at least as many ruts and potholes along the way as smooth patches. Nonetheless, it has been a beautiful journey, one I wouldn't trade for anything. And the destination is certainly worth any hardships we've had to endure. My son is living his life-long dream, and I have gotten to be an integral part of the process. How lucky am I!

While we've now reached the end of Junior Tennis Road, it's not really The End. Rather, it's more akin to the roads in Atlanta that suddenly change names. Just like that, Junior Tennis Road has become College Tennis Boulevard. And from my current vantage point, the Boulevard looks pretty inviting though I suspect there will be many S-curves along the way.

I will be travelling this new path more as a passenger as opposed to my role as the primary driver and navigator throughout the Juniors. That will take some getting used to. I'm up for the challenge. Please excuse me as I climb into the back seat.