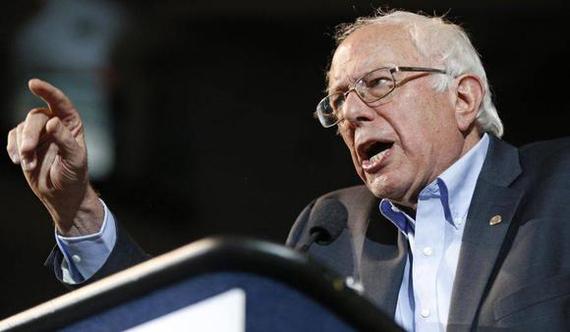 Perhaps it's because he keeps saying whomever is President, nothing will change because the system is rigged by Wall Street. Perhaps it's the disbelief that anyone running for President just comes out and says that.

Perhaps it's because he began drawing the largest crowds to political rallies, and still does, breaking Obama's record for crowds in 2008.

Perhaps it's that he won the New Hampshire Primary by the most votes ever given to a candidate of either party in history.

Perhaps it's his endless energy to re-direct the talking points away from negative slurs and sensational headlines back to the vanishing middle class, impoverished seniors, struggling families, vast student debt, imprisoned African American and Latino youths at a much higher percentage than white, that war needs to be a 'last' option and the lack of regulation on the pharmaceutical industry's pricing is a crisis.

Perhaps it's his shock when he points out Goldman Sachs received a $5 billion fine for improprieties leading to the housing crisis recession, but how not one executive in the bank has gone to prison. Perhaps it's because he then points out one teenager caught smoking marijuana will have a prison record the rest of their lives.

Perhaps it's because people say candidates get to 'change' and 'mature' and Hillary is a good example of that, which makes you wonder about the maturity of the guy who's been saying the same thing for 30 years and how he's suddenly on the right side of the issues after sticking to his beliefs when few supported them. That sounds pretty mature to me.

Perhaps it's his ideas that you haven't heard a political candidate say out loud in over two generations like "free public college", and '$15 minimum wage," and "breaking up the banks" and "tax Wall Street". Perhaps it's not just rhetoric but that he's proposed bills for each of these goals. I still remember members of the media laughing out loud when Sanders proposed taxing Wall Street in his first interviews, and then Sanders telling them now. Perhaps it's because the same members of the media are not laughing now.

Perhaps it's the way he stays on message and stays positive as his opponent swing negative.

Perhaps it's his request for donations the night he won the New Hampshire Primary, saying he was going to New York City: "but not for a fundraiser." In the next 24 hours 26,000 people donated $6.4 million in average donations of $34, breaking another record.

Perhaps it because he's gone to the people, because he believed in them, and it turns out the people believe in him in return.

Perhaps it's because these speeches have set the talking points for every other campaign from the moment he entered the race, because everyone had to have a response to Sander's position.

Perhaps it's that he said when he saw Joyce Behar backstage at The View "here comes my stalker."

Perhaps it's because he just doesn't stop telling the truth.

Perhaps it's because Sanders has always said the banks were crooks and caused the financial crisis and collapse and in 2007 Hillary was preaching the corporate line and blaming home owners. Perhaps it's because John Lewis, a civil rights hero, came out against Sanders saying he was never part of the civil rights movement and in the same day 100s of pictures went viral on the web showing Sanders at marches throughout the 60s at civil rights events as a member of C.O.R.E., and Hillary was at the Republican convention in 1964 working for Barry Goldwater.

Perhaps Sanders choice not to have a SuperPac is so stunning, in the new world of Citizen's United where corporate support of campaigns can exceed $500 million.

Perhaps it's because I think we're seeing an old story unfold before our eyes. A story so old it goes back before our own country was born, and back before previous empires rose and fell. I'm thinking as far back as Rome, at the height of its empire, rich and corrupted by wealth and power, where the ruling class and noble elite controlled all the wealth, commanded the armies and the citizens were impoverished. In the written history of those times, only a handful of Senators, over centuries, were recorded as campaigning for a return to the Republic and support of the people. These men decried the imbalances of wealth and power in the ruling class and preached for the return of equality and social justice. Cheered by the citizens, they took their lives in their hands, as any threat to the entrenched power structure was to risk death. And, in the end, the few who tried, and even fewer who achieved power were killed.

The Empire endlessly protected its corrupt and morally bankrupt ruling class until it all collapsed.

I always wondered what kind of courage it took to stand up in the face of impossible odds like that and speak the truth, knowing how impossible the odds for change was. I always wondered what that would look life if we could see that history come alive today. I think we're seeing it in Sanders. To have someone fight for the people in the face of impossible odds, to say dangerously idealistic things in such a corrupt society which should be political suicide because they are really intending to make real changes.

These moments in the grand course of societies can not be taken for granted. The voices of change that lead through sheer will and integrity of character don't come every year, or even once in a generation, but sometimes only once in a lifetime. Leaders like these aren't born to an age, they are burned in the fire of their upbringing causing some chemical change that forces them to care as much for others as for themselves. They become fearless and truthful and nd suddenly, impossibly, they become the agents of change that can bring about a new age.

Perhaps that's why Sanders says what he believes, not what he thinks you want him to say. Perhaps it's because Sanders wants to fix the country and doesn't care if you don't like it. He's not telling you what you want to hear. He's telling you what he feels you need to know. And if you want real change, for the first time in several generations, it's nice to know that for once, there's someone who's really ready to stand up and fight, right now, for the rest of us.

And perhaps that's the guy you want to vote for.