Climate change requires urgent action. According to the Intergovernmental Panel on Climate Change (IPCC), the planet has a carbon budget of 1,000 gigatonnes (Gt) of CO2 starting from now. If we want to avoid the worst impacts of climate change, we have to stay within this budget. However, our entire carbon budget will be used up by 2040 at current emission rates. To stop that from happening, we need to get fossil fuels out of the energy sector as fast as possible.

Globally, the energy sector is responsible for two-thirds of greenhouse gas emissions. That's because we rely heavily on fossil fuels to keep the lights on, drive our cars, heat our homes, and power our industries. For example, fossil fuels provide more than 80 percent of energy In the United States. 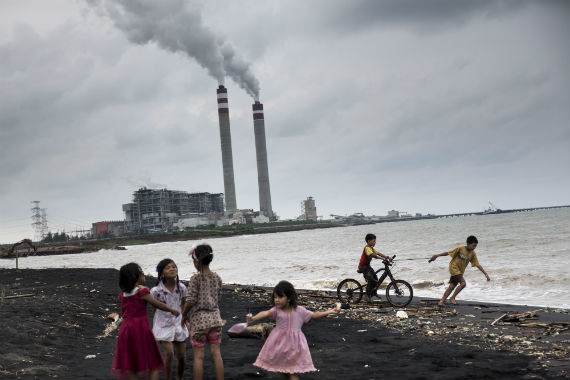 Children play by the beach near a coal power plant in Jepara, Central Java, oblivious to the possible threats to their health. The coal mining furore poses serious hazards to human health, the environment and the social integrity of communities around mining areas.
Photo Credit: Kemal Jufri/Greenpeace

Burning fossil fuels is a nasty business. It not only damages the climate, but also inflicts a range of harms on the environment and human health. The estimated cost of these impacts is staggering -- more than $2 trillion per year. Fortunately, renewable energy can take the place of fossil fuels and meet 100 percent of our energy needs by 2050.

The IPCC recently confirmed, for example, that the technical potential for renewable energy is much higher than global energy demand. Greenpeace has also produced its own scenario, showing how we can transition to renewable energy completely by 2050. The Greenpeace scenario stays well within our carbon budget, using only 667 Gt of our carbon budget between now and 2050, whereas business-as-usual would result in the emission of 1,400 Gt of CO2 in the same timeframe.

Achieving a 100 percent renewable energy future requires an energy revolution, a fundamental shift in the way we generate and use energy. This means moving away from large-scale centralized power plants to a more distributed energy system, where communities and individuals are empowered to produce their own energy and reap the benefits of locally-produced renewable power. It also means using the energy we produce more efficiently; electrifying a significant portion of our heating and transportation demand, building smart grids, microgrids and nanogrids; reforming utility business models and electricity ratemaking; and deploying energy storage.

The shift to renewable energy is already having a noticeable impact on global greenhouse gas emissions. In 2014, emissions from the energy sector stalled at 32 Gt of CO2, despite economic growth, for the first time in 40 years. While this is tremendous news, we need to reduce emissions faster than we are now. 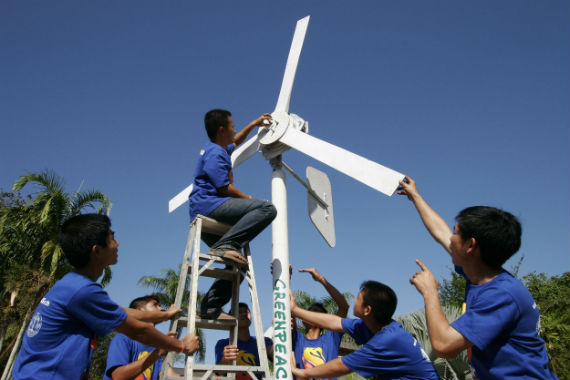 Members of Solar Generation, a youth wing of Greenpeace, and the local community install a 2.5kw wind turbine at Prathiu primary school. Greenpeace is challenging the lawmakers writing the Power Development Plan (PDP2007) to explore the potential of renewable energy combined with energy efficiency, instead of increases in dirty fossil fuels and dangerous nuclear technologies.
Photo Credit: Vinai Dithajohn/Greenpeace

Even if there are no technical or economic barriers to achieving a 100 percent renewable energy world, political will is often lacking. Governments across the world remain wedded to fossil fuels while many utility, oil, coal, and gas companies are doing everything they can to delay the shift to clean energy. This month, world leaders are gathering in Paris for the U.N. Climate Conference. Greenpeace is calling on them to craft a binding agreement that signals the end of the fossil fuel era and a shift to a 100 percent renewable energy supply by mid-century.

As important as it is to think globally on the climate issue, it's just as important to act locally. There are many ways for individuals and communities to make the energy revolution a reality. For individuals, measures include putting solar panels on your roof or participating in community shared grid, insulating buildings, replacing lighting bulbs, buying an electric vehicle, or replacing an old boiler with an air source heat pump.

This post is part of a "What's Working: Low-Carbon Economy" series produced by The Huffington Post, in conjunction with the U.N.'s 21st Conference of the Parties (COP21) in Paris (Nov. 30-Dec. 11), aka the climate-change conference. The series will put a spotlight on solutions to shifting away from fossil fuels to renewables, and how we can best minimize our output of greenhouse-gas emissions. It is part of HuffPost's What's Working editorial initiative. To view the entire series, visit here.