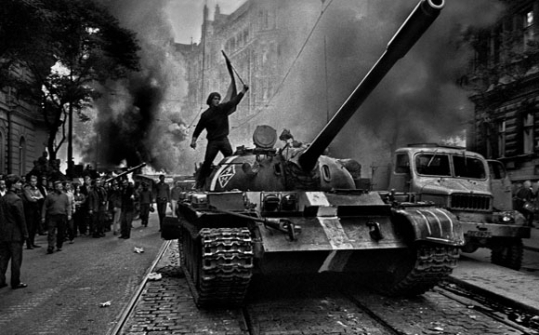 Josef Koudelka's striking photographs in the exhibition "Josef Koudelka: Nationality Doubtful" at the Getty Museum include images of the Roma (Gypsy) communities, the 1968 Russian invasion of Prague, panoramic views of devastated environments and ravaged landscapes, and Israel's separation barrier in the West Bank. The photos are haunting and enigmatic, as emotionally impactful as their meaning is uncertain.

Not many details of Koudelka's life are known beyond the broad outlines. He was born in Moravia, Czechoslovakia, in 1938 and originally trained as an aeronautical engineer. In the late 1950s, he began to take photographs, experimenting as much with exposures as with developing the film. His earliest work, several examples of which are on exhibit at the Getty, are reminiscent of ink drawings or of Giacometti's sculptures, where human form is abstracted into thin lines of being, people who are but slivers of themselves.

In the early 1960s, Koudelka took up photography full time. His work began to appear in noted Czech theater review Divadlo (Czech for theater), and Koudelka worked closely with two theater companies, Divadlo Za Branou (Theater Behind the Gate) and Divadlo Na Zabradli (Theater on the Balustrade). As the exhibition catalog notes, Koudelka switched from a belly-held dual reflex Rolleiflex camera to a handheld 35mm single lens reflex Exakta Varex camera, which allowed him to move among the actors during rehearsal. Koudelka continued to experiment by underexposing the film, or creating extreme blowups of the images to achieve a graininess that seems idealized, but on occasion also approaches the grotesque (such as in his images of a performance of Alfred Jarry's "Ubu Roi.").

Also in the early 1960s, Koudelka was drawn to Roma encampments. Koudelka originally thought he would photograph the musicians, but doing so led him to taking hundreds (perhaps thousands) of photographs of all of the Roma. Individuals, couples, children, the elderly, funerals and celebrations became part of Koudelka's first book, "Gypsies," which brought him renown and which he would continue to revise or enhance until a 2011 edition. In Koudelka's notebooks, exhibited at the Getty, we see the rigorous approach Koudelka took to cropping and recropping his images, sometimes using only a very small part and blowing it up, to arrive at his arresting choices.

When, in August 1968, Russian tanks invaded Czechoslovakia and occupied Prague, Koudelka took to the streets with the protesters. His images were smuggled out and appeared all over the world, including on CBS News, with the credit listed as "P.P." (Prague photographer) to protect his identity from the Soviets. In 1970, Koudelka fled Czechoslovakia, seeking political asylum first in England and eventually in France, where he became a naturalized citizen. However, as Koudelka did not have his Czech birth certificate, his passport listed him officially as "Nationality Doubtful," (hence the Getty exhibition title).

Koudelka joined Magnum Photos and began to follow Roma encampments all over Europe. He gathered this work in his next book, "Exiles," which gives a palpable sense of a people apart, unto themselves, dislocated from contemporary society and even time.

In 1986, Koudelka began using panoramic cameras to take photographs of landscapes ravaged by mining, industry and war. As the exhibition catalog notes, "People have disappeared from these photographs, but the hand of man is everywhere to be felt." Koudelka has published two accordion-style books, "The Black Triangle" and "Chaos." At the Getty, these books have been ingeniously displayed in a vitrine the length of the full work, which also defines the gallery space and acts as a divider between sections of the show.

More recently, Koudelka was invited by fellow photographer Frederic Brenner to take part in "This Place" (this-place.org), a project that invites photographers to spend six months in Israel photographing whatever they want, without restriction or agenda. Koudelka never had considered visiting Israel before, but did so, bringing his panoramic camera to the landscape of the West Bank, the Negev and the Golan Heights. "This country is divided, each side reacts to that division in a different way," Koudelka commented, "but the landscape can't react."

During his Middle East sojourn, Koudelka devoted particular attention to the separation barrier, which became the basis of his limited-edition work "The Wall." Koudelka's images of abandoned and destroyed homes, of built-out suburbs behind barbed wire and of the barrier itself tearing through the landscape are searing, damning documents that are at times beautiful, yet also deeply ugly. There is no obvious political point of view, just a statement of what is. This work is grouped with other Koudelka panoramic images of archaeological ruins in Algeria, Turkey, Jordan, Lebanon and the Brandenburg Gate in Berlin.

The Getty exhibition is the first retrospective of Koudelka's work in the United States and features many of the artist's own vintage prints, books, notebooks, maquettes and even rare vintage photos that Koudelka sold to flee to the West. In all his work, it is Koudelka's eye, his shaping of the image that is paramount. The photographer is not present; the individuals he depicts all seem part of communities beyond themselves, to the point that, eventually, people are not even present in the work. Yet Koudelka's signature is present in each image, infusing them with a certain melancholy, including in images of Czech citizens standing up to Soviet tanks; his is a point of view that is as unresolved and bittersweet as a Gypsy melody.