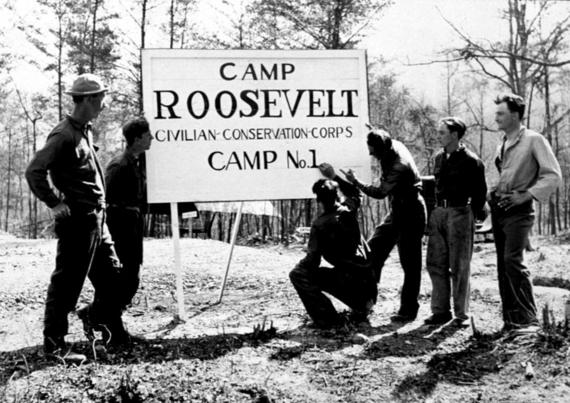 "The monopolizing of lands, deforestation, the appropriation of water, inadequate agro-toxics are some of the evils that tear man from the land of his birth. Climate change, the loss of biodiversity and deforestation are already showing their devastating effects in the great cataclysms we witness," -- Pope Francis

As Pope Francis makes headlines by championing the cause of environmentalism and economic justice, Catholics everywhere will have to pick a side.

On one side, you have those who accept the Pope's moral authority on sexual morality and ecclesial matters, but reject or ignore his calls for greater economic and environmental justice. On the other side, there are those that disagree with the Pope on certain issues dealing with sexuality but still desire to work with His Holiness in promoting the common good. President Obama would characterize someone from the latter side.

Let's make no mistake: Pope Francis believes that care for creation and economic justice go hand in hand. When you destroy the environment, you impoverish people.

Domestically but even more so internationally, areas with an abundance of natural resources tend to live in poverty.

An unfortunate example of this truth would be central Appalachia; a coal-heavy region plagued with high rates of poverty. Internationally, third world countries in Africa and Asia are producing billionaires while the workers who extract the natural resources live in abject poverty.

The oil, natural gas, and coal industries experience unpredictable boom and bust cycles. Cycles in which the average worker and taxpayers feels the pain; not CEOs or bankers. In fact, Halliburton and BP plan to cut thousands of good-paying jobs due to the sharp drop in oil prices.

Furthermore, prices for natural resources have less to do with the spending habits of the average consumer and more with international markets.

In short, letting oil, natural gas, and coal dictate financial markets is both risky and unnecessary. So how can this trend be reversed so the American consumer has more control of their pocketbook?

One answer is to invest heavily in green technology in an attempt to improve education, housing and infrastructure.

Unfortunately, environmentalists have largely failed to link 'going green' with new jobs -- the kind of jobs which can be sustained and expanded for decades to come. Appealing to the common man is the first step in building such a link.

During the Great Depression, President Franklin D. Roosevelt realized this and created the highly popular but now largely forgotten Civilian Conservation Corps. The CCC was among the first coordinated national effort to protect and build upon the precious natural resources of the nation. During its nine-year existence, the CCC put millions of young Americans back to work. In doing so, CCC members contributed to the general welfare (per the Constitution) and common good (a core pillar of Christianity) of the nation.

While learning about and protecting Mother Nature, CCC members were taught about the value of teamwork and the dignity of self-sufficiency. Many of those young CCC men went on to fight for their country during the Second World War. The Greatest Generation earned such a title because they worked together and contributed unique individual talents during unprecedented hardship. They understood individualism without valuing the common good/general welfare leads the world down a dark, destructive path.

Decades later, we now have a healthy dose of individualism but are lacking in the common good. It's yet to be determined what path this will lead us on.

Today, employers regularly complain that younger workers lack the skills necessary for 21st-century jobs. A New Deal-era national service program like the CCC would go a long way in providing the nation's youth valuable skills for a career in the private sector.

The health of America's youth is has also been an increasing concern; whether it be in regards to obesity or depression. By and large, CCC members benefited from improved physical conditions and heightened moral.

Unfortunately today, on the domestic front at least, no national service program exists on such a scale. Americorps, which was created by President Bill Clinton in 1993, is the closest thing to the CCC. Its annual budget for 2015 is slightly over one billion dollars (about .02 percent of the federal budget), which means it can invest in only 75,000 members a year. To put that in perspective, it was reported last year that the F-35 fighter program is seven years behind schedule and $167 billion over budget. Additionally, the program is expected to surpass $1 trillion in costs over its lifespan.

Perhaps instead of investing in weapons of war, the government focuses its efforts on the development our youngest citizens.

I was born and raised in Levittown, Pennsylvania. For decades, the local economy was powered by U.S. Steel in nearby Fairless Hills. At its peak in 1974, U.S. Steel directly employed 8,000 people. The steel mill is now gone; along with the middle class jobs that came with it.

If steel brought the United States into the 20th century, then surely new eco-technology can bring it into the 21st.

Imagine for a moment, solar panel roads that heat themselves during snowstorms. You don't have to imagine because the technology already exists. At first, such technology could be installed in parking lots and emergency snow routes in local towns. After being properly trained, Americorps or modern CCC members could go on to install the solar panel roadways across the nation.

Think of how many lives would be saved and jobs created if we invested in such a project.

From high tech jobs (installing solar panels and wind turbines) to low skill jobs (planting trees, weatherizing homes) the natural environment affords us all the opportunity to live, work and think green. All we need now is the leadership to see it through. Going forward, each of us have to reflect on if the work we're doing is bettering not only ourselves but society at large. Catholics who want a stable, bright future should join with Pope Francis in fighting for a more environmentally friendly world.