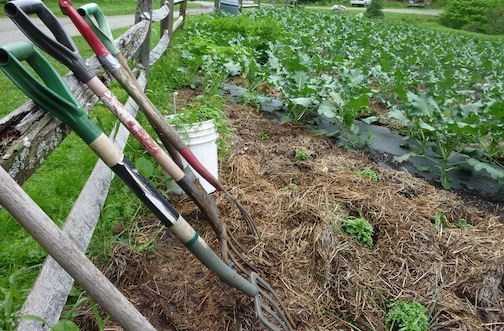 Bill Stinson, proprietor of the idyllic Peace Valley Farm in Williamstown, Mass., will be the first to tell you that his life has not been one of glamor. He encountered every type of difficulty imaginable as he plucked an agricultural life out of the New England woods for thirty years.

First it was the accidents. "I was jacking that white tractor," he told me when I visited the farm in researching my book Change Comes to Dinner, published in May. "The small tire was flat, and I was jacking it up with one of those jacks, and it flipped out of my hand and came up and went through my skull, crushed my zygomatic arch. But had I been shorter, it would have staved right through my head."

That was only one of the times he almost died, and if that wasn't trouble enough, there were the pests. "We have this huge population of rose-breasted grosbeaks," he said as he showed me his intensively cultivated fields. "They just have at the peas like crazy."

Then there were the local buyers who wanted nothing to do with his non-industrial brand of farming. "For a long time, we were way ahead of the curve and we were shut out from the restaurants," he said. "People looked at us like we're crazy. Nobody wanted us."

But then all of a sudden everything changed. A high-end restaurant in town started buying from him, followed by Williams College and a nearby hospital. People in cities became interested in where their food comes from.

The interns from Williams he had long hosted began to view his lifestyle not just as the age-old toil of food-production but as a daring political act, an anti-corporate stand to improve not just our food supply but also our democracy.

"What's most interesting to me is that the green movement has all of a sudden put me on a pedestal," he told me over a homemade pizza dinner with a handful of his interns. "All this hard work I've done is elevated and I'm kind of like a celebrity."

We have indeed entered the era of the celebrity farmer. The grand pooh-bah of this new agricultural aristocracy is Joel Salatin, made famous by Michael Pollan's path-breaking work The Omnivore's Dilemma and the Oscar-nominated film Food, Inc.

But all over the country, small farmers -- some of whom have been at it for decades with scant recognition -- are finding themselves catapulted to rock-star status.

Celebration of the small farmer

The celebration of the small farmer is on full display at various high-end foodie events that grace our cities' social calendars, as well as tony fundraising dinners for food-related organizations.

As event attendees noshed on pork dumplings and sipped bacon-infused cocktails at the 2010 Cochon 555 in Washington, D.C., photos of the hogs at play flashed on a projection screen, interspersed with the names of their farms and farmers.

Similarly, at FRESHFARM Markets Farmland Feast, a fundraiser for the organization that runs many of the D.C. area's farmers markets, every year a featured farmer speaks about the work of bringing food to market.

This year, on the event's tenth anniversary get-together on November 12, Mike Koch of FireFly Farms, an award-winning cheesemaker, will discuss how he went from raising goats to making artisanal cheese from their milk. Farmers and their lifestyle will also be celebrated in the silent auction, which will feature items donated by farmers and will be led by a farmer.

FRESHFARM's press release exhorts attendees to not only celebrate the lauded local chefs and sommeliers who will treat the assembled with food and drink, but also to "pay homage to the other rock stars of local food -- the farmers."

In researching my book, I discovered this line of thinking everywhere. At Joel Salatin's farm, I met a family piling out of a mini-van to see "that famous farm," as if the collection of fields, barns, and chicken houses were some kind of pilgrimage site.

I met young farmers who had left city jobs to embrace life on the land, often bolstered by a politicized philosophy touting small farming as a bulwark against corporate domination of our food supply and ultimately our society. These young people saw their farming not just as a pursuit of honest toil but as a bold statement about what they want their society to look like.

When the act of growing beans or raising hogs takes on that much weight -- when farming is not just farming but a heroic effort to save us from the worst excesses of capitalism -- how can farmers just stay humble farmers? They instead become protagonists in a morality tale about saving society from itself. It's little wonder they are the unlikely rock stars of the moment.

But while celebrating their crucial contributions is increasingly important, I look forward to a time when we speak more often about them -- as FRESHSFARM and other similar nonprofits usually do -- not as celebrity saviors, but as something more complex, honest, and important: Experts at what they do -- studied, experienced, creative -- and at their best, our partners in maintaining a working society in which we can all eat good food.

Katherine Gustafson is a freelance writer and editor based in the Washington, D.C., area. Her first book, Change Comes to Dinner, about sustainable food, was published in May by St. Martin's Press.