Many of the pundits are cheering the Tea Party for this victory. All Tea Party all the time.

Maybe Cantor's district was gerrymandered as too red. Irritation occurred (Cantorcitus) and the political surgery of a Cantorectomy was performed. 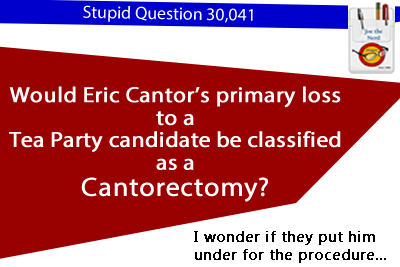 The football analogy reflects the left / right of the political system. The more extreme ideologically you are -- the closer to a goal line you set up. I honestly do not know where Trammell, the Democrat really sits, but he is on the field.

Cantor has moved from the Tea Party goal line and has attempted to get to the middle over the years. Brat, the Tea Party candidate is attacking from the extreme.

The red line at the GOP's 45 yard line reflects the possession of the GOP's 55 percent of the voters. The Democrats are going to need to get across midfield ideologically to make a dent. 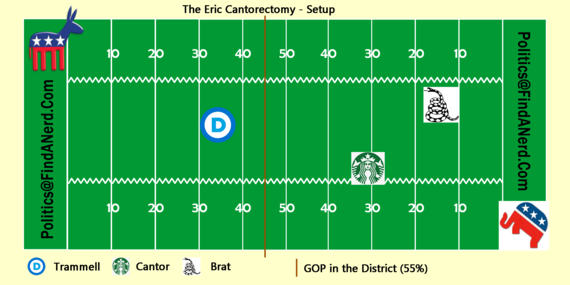 What the pundits are missing is that Virginia is an open primary state. Walk into the polls -- vote for whoever you want. You know, Democracy...

There is nothing to stop a Democrat, sick of Eric Cantor's antics, from pushing the Tea Party candidate in the hopes of getting a better November match-up for Trammell. So whether it was organized or not, it doesn't matter; some Democrats crossed over in a small turnout election to pitch the totals.

When the smoke clears an analysis can be done to compare the registration numbers of those who voted to where the votes actually were cast. If the number of Democrats who showed up at the polls are less than the number who voted for Trammell -- it may not be a big jump to say the majority of those free Democrats helped Brat. (I doubt Democrats would show up to vote for Cantor in numbers.) 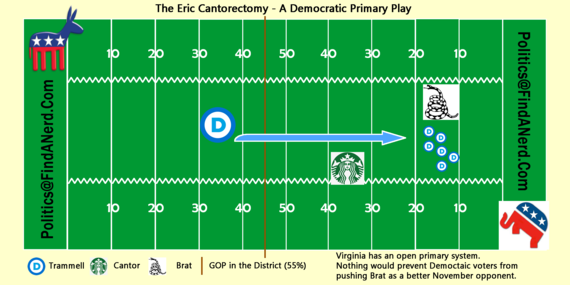 Radiation is the part of a profile of a candidate that may be acceptable to a voter. In a multi-candidate race a voter may be in the radiation field for a number of candidates. The voter then gets to pick the most acceptable winner.

While Brat has to move from about his own 10 yard line, because the 50 percent of the population line may sit at the 40, he only has to move about 15 yards to the 30 and allow his radiation (10 yard radius) to get him to the 40 yard line.

Trammell needs to move significantly further -- from his side of the field to midfield to become acceptable to those at the GOP 40 yard line. 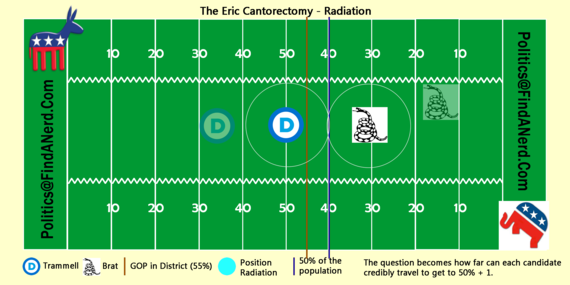 This is an argument and prayer that Trammell is a Blue Dog that can actually take this race by attaching to the middle.