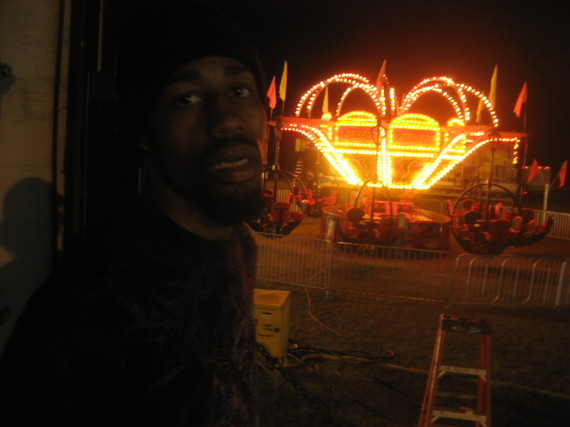 "Dance" lied to just about everybody that teardown night at the Okefenokee Fair but he came out of the shadows when he told me about, and then showed me, The Errol Flynn dance.

"Dancing is the loftiest, the most moving, the most beautiful of the arts, because it is no mere translation or abstraction from life; it is life itself."
The Dance of Life, Havelock Ellis (1859-1939)

He ran a kiddy swing but when he spoke his stories were gang stories, of Detroit's Errol Flynns and the BK.

He was a local hire last week at the Okefenokee Fair, in Waycross, GA. He ran a kiddie swing ride while I was at the Mardi Gras across the midway -- a house of mirrors.

Tall, rail thin, with a deep southern accent, he went by several aliases. I went with the simplest, "Dance."

When the house of mirrors was slow, my coworker Tyrone and I stood shoulder to shoulder on our heals.

I had no idea what I was seeing. Tyrone had a clue.

In every town I've gone to this year I've tried to capture a sense of the surrounding landscape. In Martinez, CA, I was crazy about wandering around one of the hometowns of naturalist John Muir. I walked the town, I searched the Internet and came up with this quote from Muir's eldest daughter, Wanda.

"If you had known him, you would have seen only one side of him, and he had many sides. No two people -- even his closest friends had quite the same idea of him."

That quote contains a conceit. Muir wasn't unique that way.

I should have paid more attention to Dance and his moves, a lesson I learned working with Dance tearing down the kiddie train, the kiddie swing and the carousel nearly until sunrise.

I don't remember Errol Flynn dancing in movies and there are stories about him having "unenlightened" views of race and Nazism.

Nevertheless, there was a black gang in Detroit that took his name and tagged themselves with the Errol Flynn dance (sometimes called the Earl Flynn).

Dance told me he was originally from Detroit and that he had uncles in the Errol Flynns, widely considered to be a precursor to current Black gangs.

They were shot many times. They served years in jail. They taught him how they dance, maybe how to live.

I've met numerous gang members on the carnival circuit, even in Alaska, where some workers were accused of wearing "colors" so we all had to strictly adhere to uniform shirts and hats.

In Texas, my roommate was a Gangster Disciple. My supervisor was a former gangster. Both still wore gang tattoos visible above their collars.

Tearing down the kiddie swing ride, Dance showed me the Errol Flynn dance.

Ironically, it bore some resemblance to a dance I made up in high school in the 1970s. It was mostly a shuffling hand dance I called "flying birds."

Dance said he didn't do it as well as his uncles.

I believe, Dance never messed up a freestyle dance.

Pecans in the Deep South

At about 10 pm Sunday night of teardown, I asked Dance what he does for work.

I interpreted the pause to mean he spent much of his time in illegal activities and much of the rest paying for it.

I later heard him say he was on parole and waiting for a court date.

No doubt he did his collections on his bicycle, spray painted gold, from the wide, padded seat to the wheels.

On Thanksgiving, the New York Times carried a story about the pecan season in the Deep South. Output is down as much as 35 percent, due to too much rain some places and not enough in others.

A disease called "scab" is caused by too much moisture and hurts neighborhood pickers like Dance in search of "yard nuts."

Truman Capote, the Times reminded me, wrote a short story about eccentric characters and the fall tradition in the Deep South of gathering yard nuts for sale in "A Christmas Memory."

In my head, I see an Okefenokee gangster on a gold painted bicycle wobbling down a southern dirt road with a basket of pecans.

Dance ended our teardown night before we finished the carousel, telling our supervisor at 3 am that he had to tend to his sick grandmother.

Earlier in the night he told me he was going to spend this time "with a white woman." I heard him on the phone telling someone else he was finished with the "white woman" and was going back to his fiancee.

I kidded him about breaking the "white woman's heart.

"Maybe she's at home waiting for you now thinking Michael's the man of my dreams. You're a dream breaker."

Truth is he lied to the supervisor. He lied on the phone. He lied the next day telling Amusements of America he worked all night. He was lying to his fiancee and the "white woman." Yet there was truth sprinkled in there too.

When I think of Dance, I think, pay attention.

Who works in carnivals, I'm asked. I can't say because like Muir's daughter I only see a side or two. A true side is telling, so is a false. They mix to create a point of view. Imagination fills in the rest.

My year working in traveling carnivals isn't finished until February. I've worked traveling carnivals in California, New Jersey, New York, Chicago, Alaska, Minnesota, Oklahoma, Texas and Georgia. I've hitched between jumps, about 13,000 miles. I've also visited a carnival worker feeder town in Mexico. I might work another carnival but most of my time now will be trying to publish a book on my year.

More:
travelcarnivals
Newsletter Sign Up
An essential daily guide to achieving the good life
Subscribe to our lifestyle email.
Successfully Subscribed!
Realness delivered to your inbox