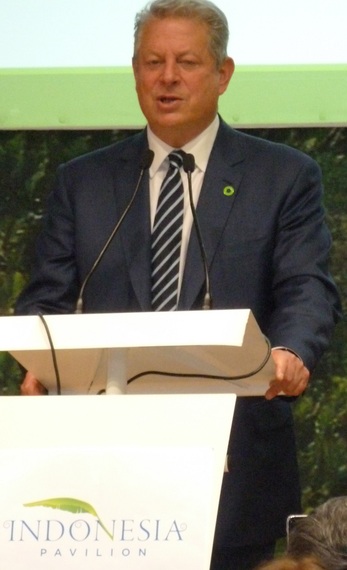 Le Bourget, France, December 8--Following a lengthy formal presentation that he delivered at the COP21 global climate talks in Paris, former Vice President Al Gore went to the Indonesian Pavilion where he delivered brief informal remarks. Among them were these pithy comments.

The Environment and the Economy

"Carbon assets are also subprime assets and [as with] subprime mortgages, those who invest in them are likely to see their assets disappear."

"We need a global project that will put tens of millions of people to work. Well, I have such a project." He then proceeded to describe the work that needs to be done globally on energy efficiency, renewable resources, and natural resource restoration to create a climate-safe, low-carbon world.

"The answer to the climate crisis is also the answer to how we provide more jobs and lift the economies of the world," he said.

The Climate Crisis and Morality

The climate crisis is "ultimately a moral issue. It is a choice between right and wrong [though it is also a political, economic, and technological issue]. "

"It's immoral to use the atmosphere as an open sewer and ignore the warnings of the scientists. . . and to condemn future generations to a life of degradation and suffering."

"This is a great moral challenge that we must confront successfully." Citing a string of hard-won victories throughout history in struggles for human rights and social justice, Gore said this victory would be won even against steep odds and cynics who say it cannot be done.

"Every time we've had such a struggle [over moral issues], young people have played a key role and sometimes have a clearer vision of what needs to be done [than older generations].
________________
John J. Berger, PhD. (www.johnjberger.com) is an energy and environmental policy specialist who has produced ten books on climate, energy, and natural resource topics. He is the author of Climate Peril: The Intelligent Reader's Guide to the Climate Crisis, and Climate Myths: The Campaign Against Climate Science, and is at work on a new book about climate solutions.