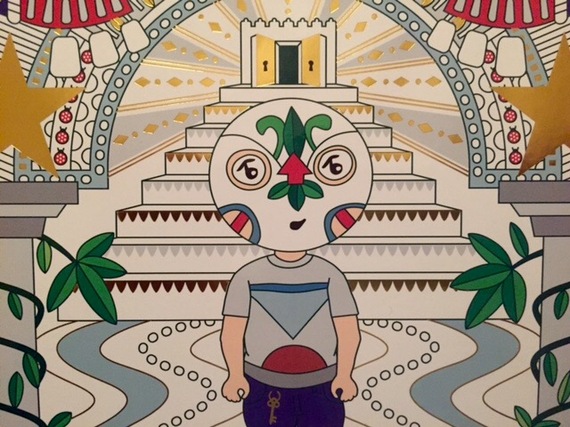 (Detail from "Mumu" by Mika, for Swatch)

So many words! This is what comes of being the People of the Book -- that our approach to sacred days, succeeding the ancient system of tangible sacrifices and physical offerings, has evolved to be so much a matter of recitation, of bringing our heritage to life verbally. Through centuries of exile, such practice created a moveable home for the Jewish people, forming a sanctuary, in whatever space, built of syllables and sentences, rather than of stones.

And still today -- as High Holiday services at Harvard University, for example, take place in two multi-purpose rooms and in two borrowed churches, clustered around Harvard Square -- what makes our spaces of worship into sanctuaries is that they become filled with the words of our tradition. So many words!

But if asked to reduce the whole of the thick prayer book for the Jewish New Year to one single word, I could answer readily, and without hesitation: "m'loch!"

"Reign!" -- or, as one might translate the imperative form of the Hebrew word for King: "Be Sovereign!"

"Our God and God of our ancestors," we pray, "reign over the entire world in Your glory, and be exalted over all the earth in Your splendor, and appear in the magnificence of the augustness of Your might over all the inhabitants of Your earthly realm, so that every animated being will know You as its animation, and every creature will understand You to be its creator..."

Rosh Hashanah -- as far as the aspiration of its many words is concerned -- is a grand fanfare for the Divine.

Over and over, we pray for a world in which Divinity is gloriously manifest, a world that shines with the immediate presence of the Most High, as we imagine the Divine ascending in splendor to be enthroned.

So much of the liturgy of our New Year is a quoting of our scriptures back toward the Divine, as though reminding God of this ancient reassurance and of that one, by way of imploring for the fulfillment, finally, of the visions, and for the actualization, at long last, of the promises of divine sovereignty.

"The Eternal One shall reign, robed in splendor, girded in strength, making the earth firm, that it not totter." (Psalm 93:1). "God shall make wondrous works to be remembered." (Psalm 111:14). "God shall ascend amid the fanfare, the Eternal One in the call of the ram's horn." (Psalm 47:6)

Yom Kippur, then - our Day of Atonement - is a rejoinder that says: Imagine for a moment that all of that happened. How would you stand on such a day? Consider what it would be like if God were suddenly so manifest, enthroned so actually in glory. Could you stand in that presence, as you are, and survive?

Now that is a terrifying thought. And immediately we begin to search our souls and recognize our shortcomings. We may define the Divine Sovereignty and Divine Presence we pray for at Rosh Hashanah as: That Before Which Our Failings and Our Faults are Glaring and Transparent on Yom Kippur.

And that sounds rather discouraging. Is each new cycle and the start of each new year mostly a matter of telling ourselves that we have not yet deserved the Kingdom of the Divine, that we have failed and fallen short and proven unworthy of God's Majestic Presence? Our liturgy on the Day of Atonement can seem that way: "We have sinned, we have transgressed, we have rebelled, we have spoken seditiously" - so who are we to expect and to demand that God be gloriously manifest in our world?

There is that possibility, the hazard of a self-deprecating and self-abnegating approach to the High Holidays, an experience of prayer to make us feel tiny and despicable - one from which we walk away saying to ourselves it must be fair, after all, when the world fails to shine with divine light, and berating ourselves for expecting such splendor in the first place.

To which I say - God forbid.

Or rather, we must forbid it. We have to take an approach to our New Year that starts in a constructive experience that may actually lead somewhere redemptive.

Rather than telling ourselves we are unworthy, Yom Kippur ought to be a matter of clearing away obstacles and obstructions, so that what we have within ourselves to contribute toward a world radiating Divine Presence can shine forth. Instead of burying ourselves in a feeling of how undeserving we may be, our Day of Atonement should be a matter of getting out from under such encumbrance, so that we can address ourselves to the year ahead with self-respect and with a sense of possibility.

We have to face that within ourselves which is wanting, and the particular ways in which we have fallen short. But the purpose of doing so is to leave the faults behind - we name them in order to get a grip on them, and we specify them so that we can put them out of our way, as we turn toward the year ahead. We do not catalogue our transgressions to define ourselves. On the contrary, we list our failings in a realization that we do not have to repeat them.

Then a world of possibility opens before us. Then we can become partners in building a better world, even a glorious realm of the Divine. The essential spiritual step of our High Holidays is recognizing in ourselves the capacity to do so, and to make it so.