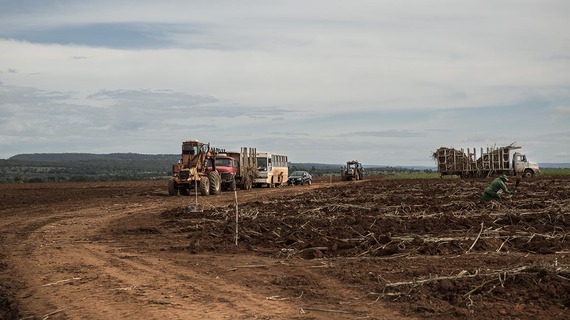 Not all Americans know what that E-10 sticker on the gas pump means. A new documentary "The Ethanol Effect" which can be seen on PBS or online is a welcome addition to the sometimes technical news coverage of the Renewable Fuel Standard (RFS).

Passed in 2005 and expanded in 2007, the RFS mandate for biofuel consumption has driven a massive shift in our agriculture system to produce energy. This has harmed our food, water, biodiversity, grasslands, and forests - and not just in the United States.

Host David Biello speaks to many stakeholders who are on different sides of this issue. But I do wish they had investigated some of the claims a little more. For example, one speaker claimed that corn ethanol provides better air quality which is simply not true.

The testimony of the Nebraska farmers was particularly compelling, because while I do oppose the corn ethanol mandate and advocate for reforming the RFS, I don't blame U.S. farmers for growing corn ethanol. The government set the farm and energy policies - including the RFS.

The farmers are only trying to do their best for their families given the current situation. But those misguided government policies have driven them to mono-cropping huge amounts of corn for fuel, which causes some of the problems discussed in the documentary such as water quality, loss of bees and hunger.

Unfortunately, the documentary focused only on the impacts in the U.S. and did not spend much time considering the impact of biofuels in developing countries. After all, not all of our biofuels are made in America. We import from places like Brazil, Guatemala and Indonesia. There is a brief mention of the tortilla price crisis in Mexico, triggered by spiking U.S. corn prices. What isn't mentioned in the documentary is that poor families in developing countries spend most of their income on food, and so even small increases can hurt their ability to feed their families.

Demand for biofuels also drives land grabs around the world. A land grab is what happens when family farmers are kicked off their land, usually to make way for much larger, industrial style farms where only one type of crop is grown. For the farmer, being kicked off their farm means not only losing their home, often a home that has been passed down from generation to generation, but their ability to feed their family and their investments in the future. I would have liked to see a farmer from Brazil, like the ones I met in 2015, join farmers from Nebraska in having their issues represented.

What struck me most, though, was the discussion about "Big Agriculture" and "Big Oil" fighting it out in Congress, with "consumers stuck in the middle." It's a depressing representation of the debate over the RFS, but sometimes that is what it feels like. As someone who is not a fan of either Big Ag or Big Oil, this is a big problem.

The documentary says that as consumers we have more choices to make. And there are consumer choices (E-10? E-85? Electric? Transit? Biking?), but one point "The Ethanol Effect" makes clear is that our farms, food, water, landscapes, biodiversity and energy are all tied together. Ethanol policies such as the RFS impact all of them - here and abroad. So this isn't just about consumers, it's a choice for citizens.

We need to decide how we are going to combat climate change. Will we pursue emissions cuts to put us on the path to meet the goals of the Paris Agreement?

Do we want a transition to a truly clean, renewable energy that is sustainable, good for communities, and that protects the jobs and livelihoods of workers?

Do we want a farming system that protects farmers, in this country and around the world, but also ensures access to food, ending hunger by 2030 - something our leaders have committed to doing?

If we let Big Ag and Big Oil dictate the terms of this debate, we'll all lose. The answer is not more ethanol or more fossil fuels, which reduces these complex issues to a fight between big companies over market share. We need a new way forward that works for people and the planet.