From clickbait headlines to unfair reviews of products and services, the open nature of social media presents ethical issues. The public should expect accurate online information, yet too often news stories, PR materials and other information are inaccurate. Our media ethics bookshelves are full of important pre-Internet conclusions that continue to speak to social media accuracy. Among common generalizations:

In Valeria Alia's 2004 book, Media Ethics and Social Change, Thomas Cooper is mentioned as focusing on three international ethical concerns -- truth, responsibility and free expression. This is the heart of the social media challenge to promote freedom within an ethical context of responsibility. More information is good, only if it drives more truthful storytelling.

As early as 2008, a study in Public Relations Journal found nearly all responding to a survey of PR practitioners agreed that the instantaneous nature of social media and blogs "forced organizations to respond more quickly to criticism." It would seem that speed is a paradox, both a friend and foe of truthful statements under deadline pressure.

Let's look at a recent example from daily journalism. The other day, CNBC published an online story under the following headline: "#AdviceForYoungTraders has gone viral on Twitter." This was followed by a statement within the short story: "Twitter lit up early Friday morning with a mix of jokes and serious advice for young, aspiring traders." The story was followed by a handful of "some of the most notable tweets." There was no disclosure of whether it was the Twitter trend algorithm or some other measure that elevated the story and specific tweets, or if a PR source had suggested it.

At the UNO Social Media Lab, we used the open source NodeXL tool to perform an independent analysis of the hashtag. While 4,473 Twitters users in more than two days is a crowd, there is no journalistic standard for when to call tweets viral. In this case, there were many subgroups clustering around various topics - from corporate profits to interest rates. The top Twitter account in the conversation, for example, was Phil Davis @philstockworld with more than 1.12 million followers and more than 18,000 new followers in one week. The pattern of clustered conversation around the hashtag is rich and tells much more than a summary declaration that tweets are viral. In fact, only a few of the thousands of tweets went very far on Twitter. 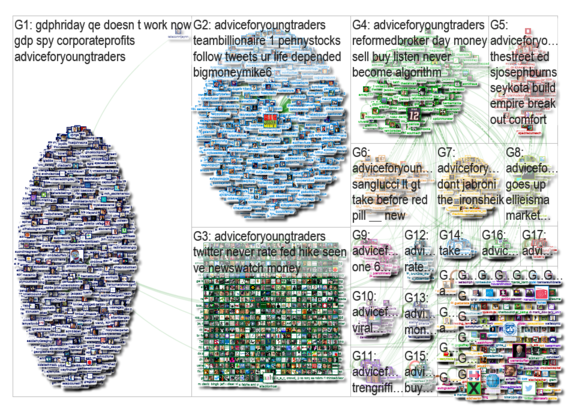 A handfull of Twitter accounts (@philstockworld, @hedgology, @iandaos, @thestreet, @suckmyspiderdic, @notgiacomo, @harlequinoyb, @ejw6119, @ilveinzenstore, and @reformedbroker) "gained significant attention for their tweets on the topic," while 13 percent, 585, "merely mentioned the hashtag while not replying or being replied to by any other person," Social Media Research Foundation Director Marc Smith said.

The "leading voices created tweets that were repeated by dozens of others," Smith said. "In contrast the presence of many 'isolate' users who mention no one else and are mentioned by no one else, suggests that the hashtag gained significant visibility across a wide population, but did not become a focus of conversation among many of these people who never got a single retweet or mention."

In general, a large chunk of hashtag conversation remained within smaller groups, and these comments and connections did not go viral or receive broader attention.

Journalists and PR professionals should be very careful when attempting to generalize from a handful of anecdotal tweets. Our first responsibility is to the truth and accurate representation rather than stories that generate a lot of clicks and views.

Social media ethics also is becoming a matter of digital literacy for all citizens. As the Deseret News recently noted, while younger people have technology skills, the older generation offers experience, savvy and understanding of important questions: When do you need to avoid responding? What impact do social media decisions have on people? What are the effects of common practices? We can conclude this much about the ethics of social media: When we stray from truth that is based upon solid and verifiable evidence, it is impossible to defend actions through moral reasoning. Social media are not different from other media contexts. Tell the truth.