It's no secret that NGOs, while considered "non-profit," require successful business strategies to survive. With most NGOs relying on the generosity of individuals, foundations, and businesses to keep their operations afloat, they must master the art of appealing to their supporters. One way of doing this is through the timeless practice of storytelling.

In light of the "Kony 2012" saga -- the story of one valiant white hero who was ready to take down Central Africa's Lord's Resistance Army... until a mental breakdown of the naked variety brought about his tragic downfall -- more NGOs are contemplating the ethics of utilizing social and digital media to promote their causes.

Cue Richard Lakin. Lakin is a freelance digital producer and co-founder of 18 rabbits digital media. While Lakin has spent his career filming things like professional sports events and short films for the education industry, he has carried out his most rewarding work in the developing world.

Inspired by the Arab Spring, WikiLeaks, and the Occupy movement, Richard decided to return to the developing world, specifically Honduras, to help promote economic and political change through digital media. His pet project is the Organization for Youth Empowerment (OYE), a Honduran-based NGO that seeks to break the nation's poverty, insecurity, and school dropout cycles through education, capacity building, leadership training, and skills development.

Lakin, a 60-year-old with a graying mustache and eyebrows that are etched in a perpetual V, arrived to Honduras with a clunky camera bag in one hand and his tripod in another. He had been to Honduras six years earlier to work with OYE, and he knew what to expect -- perpetual heat, 24/7 sweatiness, and inevitable sunburn.

Lakin was unsurprised that so little had changed since his last visit. A military coup may have ousted the country's democratically elected president in 2009, but he found that the politically restored Honduras was still struggling. The country has the highest homicide rate in the world at 82 people per 100,000 (compared to New York City's 7 people per 100,000) and is plagued by gangs, narco-trafficking and corruption. Last month 360 inmates burned to death in a prison in Comayagua where nearly half of the prisoners had never even been brought to trial.

Yet Lakin wanted to come back to Honduras to work in El Progreso, Honduras's third largest city, which sits in the shadow of San Pedro Sula, the world's most dangerous city.

"I wanted to work with OYE again," Lakin said. "OYE is the most effective NGO I have seen in operation -- and believe me, I've worked with a lot of them."

Lakin wasted no time during his three-week stay in Honduras before filming. He began interviewing the OYE kids -- middle school, high school, and college-aged youth who were once at risk of not completing their educations due to economic hardship and family problems.

Lakin's journey brought him to the home of Rosa Sevilla, a 19-year-old with a Snow White spirit and parents who nearly had to choose between sending either Rosa or her brother to school. Then he met Gerald Velasquez -- a 19-year-old artist whose mother nearly forced him to drop out of school so he could work to support his family instead. Later, Lakin found himself on a bumpy, 1.5-hour ride through the banana plantations to the home of Neris Avila, a 4'8" high school student who has transformed from "the quiet girl" into a star on OYE's online radio program.

"I'm focusing on the positive stories... stories of transformation," Richard commented. "I don't want to be one of those people who uses suffering children in the developing world to elicit funding. Look at Neris's story. She loves her home in the plantations. She has a beautiful, intact family. And it's completely worth sharing."

The first project Richard ever worked on abroad was in Kenya. There he met a young boy named Safari, who was found in his home sitting next to the bodies of his parents, who had died of AIDS. Later, Safari discovered that he too had AIDS.

"I found it difficult to use that clip to promote the program," Lakin said. "But it was a real testimonial and it illustrated how vital the NGO is that I was profiling."

Lakin believes that content and community are key to sustaining any social media platform, with NGOs being no exception. To him, community does not necessitate creating outlandish Manichean struggles, filming starving street-children, or telling stories of disaster.

"Interacting with the audience is what generates the most traffic on the site," Richard said. "And you don't have to make things up or make people cry to do it."

Now that Lakin has completed filming, he has begun editing the footage for the creation of several short videos and one longer documentary that OYE can use to share its work in youth empowerment with a more global audience. He also hopes to create a template for other small organizations to use by chronicling his process with OYE.

"This whole experience has made me very aware of daily Honduran life," Lakin said. "This country is facing a lot of issues, but I've come to love Honduras and always miss it when I leave."

Despite Honduras's current reality, seeing the energy of the youth at OYE has filled Lakin with the hope that change, even if it only begins on a small scale, is possible.

"These are going to be some impressive and very formidable leaders," Lakin commented. "Some of the young women especially. They are going to have a huge impact on the future of this country. I hope I can come back to document it in ten years." 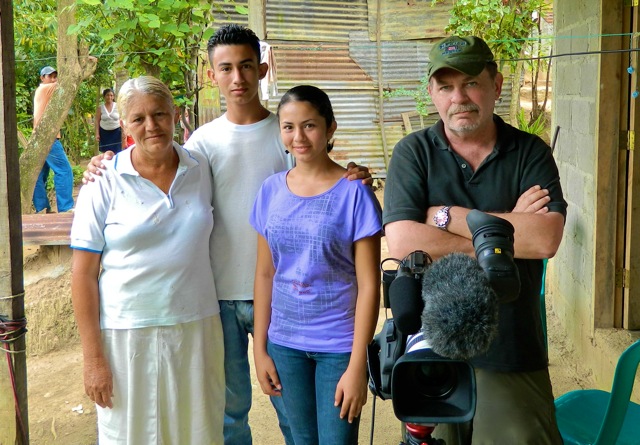